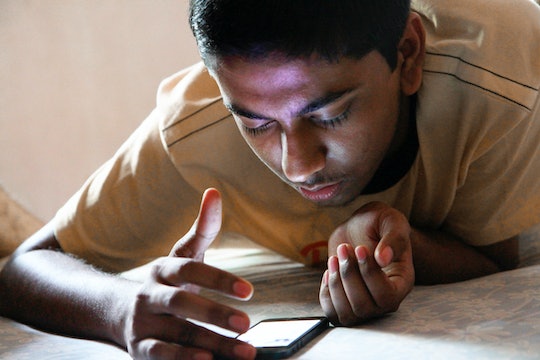 Between texting, tweeting, IMing, Facebooking, Instagramming, and Snapchatting, it's no wonder most of us worry about living too much of a very sedentary life. And according to a new study published in Pediatrics, things are not looking up for teens. The study published says that teenagers aren't getting enough exercise, and that's a problem for a number of reasons. The Center for Disease Control suggests 60 minutes of exercise a day, but only one in 10 teens gets that amount of physical activity. That doesn't mean an hour logging miles on the treadmill or 60 minutes of heavy lifting, but it does mean an hour doing something that feels good — both for your mind and your body.

The study used GPS devices to track not only how often and how long teens were exercising, but also where said movement was happening. The major revelation of the study was that though students spend about eight hours per day at school, they're only physically active for about 23 minutes. TBH, not all that hard to believe, either. The only time you're really moving as a teen in school is in the hallways in between classes. And since that time is routinely limited (usually just a few minutes), it's not exactly easy to rack up a ton of time moving.

For the average teenager, adds the study, only 39.4 minutes of each day is spent actively, so those 23 minutes suddenly becoming hugely important. As far as the sample set goes, the subjects were between the ages of 12 and 16 and lived around Baltimore, the District of Columbia, Maryland, and Seattle between 2009 and 2011. The participant group was made up of approximately half girl and half boys, and just under a third were nonwhite.

Here are some of the reasons the study listed for why teens aren't getting the exercise they need:

The most active times for the participants was when they were near their school or outside in their neighborhood, but once they were home, indoors, the researchers noted that participants were very physically inactive. Once inside, activities were mostly based around entertainment and electronics. Kind of a no-brainer, but the more time a participant spent outside, the more physically active they were.