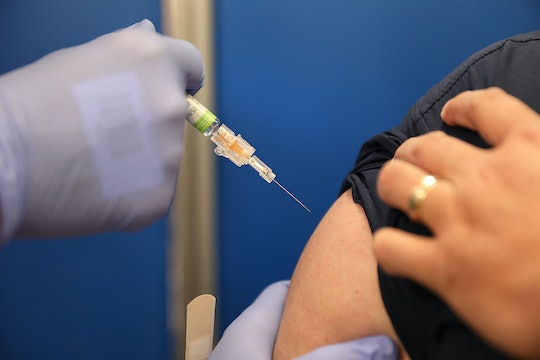 An increasing number of children in recent years have failed to follow the recommended immunization schedule. The reason? Their parents simply choose to opt out of it — whether it's out of fear, because of information found during online reading and hearing opinions from friends, or because of religious beliefs. As a result, diseases that were all but eradicated in the United States are now making a comeback. Now that many of these unvaccinated kids are older, I can't help but wonder: What do they think of their parents' decision? Apparently, teens of anti-vaxxers are asking Reddit how to get shots without their parents knowing.

According to Salon, some teenagers are rebelling against their anti-vaccine activist parents for the sake of their own health — and they're turning to Reddit for legal advice. "I am writing because I am the 15-year-old son of an anti-vaccine parent. I have spent the last four years trying to convince my mother that vaccines are safe," Reddit user Danny691261 posted five months ago. "I haven’t succeeded. So instead I am trying to research how to be vaccinated without my mother’s consent." In another thread on the subreddit legaladvice, a 13-year-old wrote, "I haven’t got vaccines since elementary school, Dad fell down the conspiracy theory rabbit hole, and my Mom agrees with him. Any and all advice is appreciated."

If you read through the comments in the first thread, you'll see the consensus is there's really no way to get around the whole parental consent barrier. (Most states require it, as Fatherly reported.) So unless a teen wants to face legal repercussions of some sort, their hands are typically tied until age 18. Fellow Reddit users offered their best advice anyway. One person wrote, "I would recommend talking with a school nurse. They will be the most effective person to take up this fight against your mother, especially if there are immunizations you have yet to receive that are required for public school. A colleague of mine is a school nurse; believe me when I say that the good ones will fight tooth and nail with the antivaxxers."

Another person agreed with this strategy, adding

Agreed. My mom is a school nurse and has been dealing with a slew of anti-vaxxer parents over the last few years. She does a pretty good job of scaring or guilting the bejeezus out of parents to get their kids vaccinated.

According to the Centers for Disease Control and Prevention (CDC,) there is no link between vaccines and developing autism spectrum disorder. This false notion of a connection between the MMR vaccine and autism started back in 1998 with a study published by the (now discredited) physician and researcher Andrew Wakefield, Vox reported. Although Wakefield's study has been repeatedly and decisively disproven, his paper retracted, and his medical license stripped, the damage had already been done. And we're still dealing with the repercussions today — considering the rate of unvaccinated young children is rising.

I understand why these parental consent laws surrounding vaccinations are in place. It's a huge liability risk — plus parents are the ones actually paying for the shots. So for now, it looks like teenagers of anti-vaxxers can't take the advice of medical experts and get caught up on their vaccines without parents' permission. Hopefully these teens go on to get those life-saving vaccines once they turn 18 — and then break the cycle of misinformation with their own kids once and for all.

More Like This
Parents Are Missing Work At Record-Breaking Rates To Take Care Of Sick Kids
Yes, It’s Possible To Get Pregnant If You Have An IUD
Is It Good For Babies To Be Exposed To Germs? It’s Complicated
Pelvic Pain During Pregnancy: What Causes It & How To Deal With It