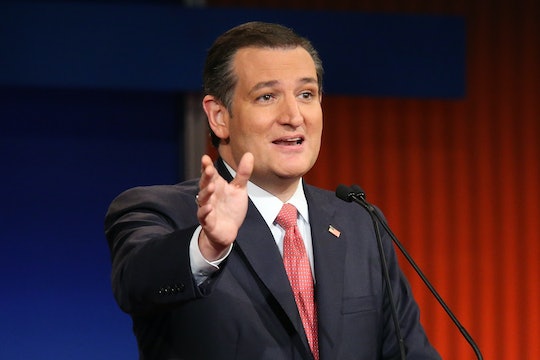 During the GOP debate Thursday night, Texas Sen. Ted Cruz said something that you just don't say. Cruz had previously targeted business mogul and Republican frontrunner Donald Trump by saying he "embodies New York values," according to CNN. And he didn't mean it in a good way. He only dug himself deeper into the hole after Trump asked him to elaborate on his comment. Friday morning, The New York Daily News targeted Cruz's "New York values" comment, and the paper's response — which was echoed across the internet — is the wrong response for a few reasons.

When Trump asked Cruz to explain what he meant, Cruz said that New Yorkers are "socially liberal" and that the lives of its residents are centered around "money and media," according to CNN. "Not a lot of conservatives come out of Manhattan," Cruz said.

Trump, of course, took the comment as a direct insult — and his thinking wasn't illogical. Trump responded to Cruz's comment emotionally and described the way New Yorkers reacted to the Sept. 11 terror attacks, according to CNN:

Later, Cruz dove deeper into his comment with Fox News' Megyn Kelly, and that's when things got uglier, according to the New York Daily News:

Everybody understands that the values in New York City are socially liberal and pro-abortion and pro-gay marriage. And focus on money and the media.

Not surprisingly, New Yorkers weren't happy at all. The Daily News responded to the comments with the following cover:

If you are dumb enough to think that New York values are some sort of handicap in this presidential season, then you are as dumb and tone deaf as Jesse Jackson was calling the city 'Hymietown,' as dumb as Gerald Ford was when he gave this paper the most famous front page in its history, the day he effectively told New York to drop dead.

First, Lupica has a point. The odds of a president who is against gay marriage and (constitutionally-protected) abortion rights winning this election are slim. Republicans are way behind on the times on those issues (which are a matter of religious belief), and everyone knows that. But telling Cruz, who was born in Canada, to go back there because of his comments is endorsing the exact way of thinking progressives point to in conservatives and call insensitive and anti-American.

When New Yorkers tell Cruz to "Drop dead," they're stooping down to a really low level. Republicans want to refuse Muslim refugees fleeing war torn countries because they're Muslim and they might not share our "American values"; that's bad, because it's lumping Muslims who don't condone violence into the same category as ISIS, reveiling an Islamophobia that is seriously problematic. But telling Cruz to "Drop dead" and "go back to where he came from" makes New Yorkers not only sound immature, but it makes them hypocrites for calling out those Republicans who want to refuse refugees.

Progressives — who pride themselves on inclusivity and equality — claim that it's against the U.S.' strong history of welcoming immigrants to tell those immigrants to "go back home" when they challenge traditional American values, so how can they do that to Cruz? Yes, what he said is absurd, and it should be attacked for its absurdity, but using his Canadian birth as part of the attack makes no sense and goes against everything the left purports to uphold. (Not to mention New York is great enough that there are just many better responses to what Cruz said, like those below.)

And – this goes without saying, I think — telling someone to "drop dead" because he insulted a city isn't an argument as to why what Cruz said could sink his campaign. It doesn't do justice to the people who died in the Sept. 11 terror attacks in New York City, and it certainly doesn't do justice to New York or American values, which hold that a diversity of beliefs (even ones that might not be right) are part of what makes the U.S. great.

If New Yorkers are mad at Cruz for his comments, they should take them like the resilient New Yorkers they are. They should not respond with the same hate and in the same language that they've been calling Republicans out for for months.

More Like This
Sarah Michelle Gellar Is Facing A Terrifying Parenting Milestone: Sleep Away Camp
Lauren Conrad Shares Experience With "Lifesaving Reproductive Care" After Ectopic Pregnancy
The FDA Is Warning Parents To Not Use Baby Neck Floats After One Infant Died
Ketanji Brown Jackson Spoke Directly To Her Daughters In Her Powerful Opening Statement