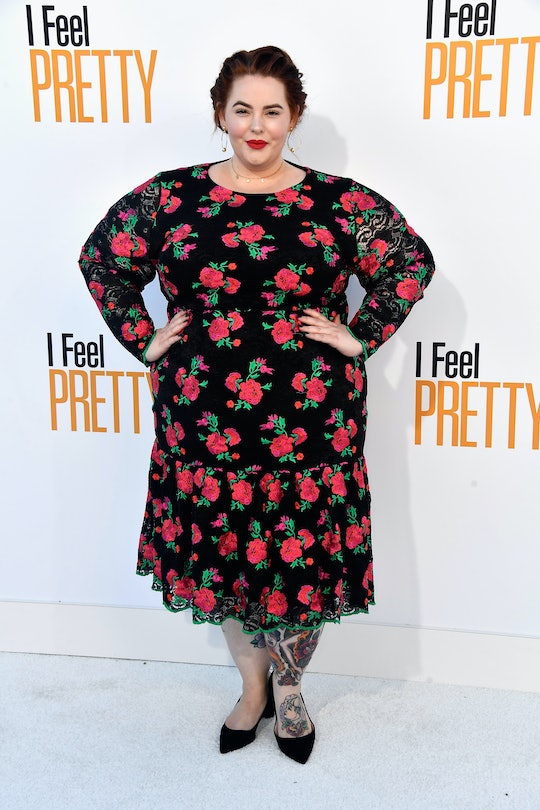 Model — and body positivity icon — Tess Holliday's latest professional milestone is certainly one to celebrate: she is the cover girl for the October issue of Cosmopolitan in the UK. But because we live in a world *full* of awful fat-shaming, Holliday has had to take this latest accomplishment with a heaping dose of criticism. Online critics — including Good Morning Britain presenter Piers Morgan — have called out both Holliday and the magazine for supposedly promoting unhealthy lifestyles by issuing the cover, but thankfully, Tess Holliday has choice words for critics who think she's "glorifying obesity."

It's no secret that Morgan seems to enjoy sharing all sorts of controversial opinions he knows will spark a heated debate (he recently called out Meghan, the Duchess of Sussex, for "disowning" her father in a rather dramatic article for The Daily Mail, for example), so it isn't entirely surprising that he felt compelled to weigh in on Holliday's Cosmo cover. In a tweet Monday, Morgan wrote, "Sorry, but 5ft 3in & 300lbs is NOT a ‘positive body image’ to celebrate on the front cover of a magazine," and suggested it would only encourage Britain's "ever-worsening obesity crisis." Twitter users on both sides of the debate rushed in to comment, but Holliday had her own, unapologetic take on the matter: In an Instagram post, she simply wrote, "People who think I’m glorifying obesity are glorifying stupidity."

If you grew up surrounded by teen magazines, then you likely spent your adolescence bombarded by airbrushed images of impossibly beautiful (and always thin) girls who made it seem like the key to living your very best life probably involved makeup, designer jeans — and, if you were a '90s kid like me, inexplicably dousing yourself in Tommy Girl perfume. In a follow-up piece to their original story Cosmopolitan explained that that was one reasons why Holliday's gorgeous cover photo mattered so much: it means girls who read the magazine are getting a chance to see a cover girl that might actually look like them for once.

What's more though is not only is Holliday on the cover, she's showing off her body in the same kind of sexy cover shoot the magazine is known for. And she looks *amazing*.

As Cosmo UK fashion and beauty writer Laura Capon noted in the piece, the cover doesn't "just acknowledge that we exist, but that we exist in a way that isn't for your entertainment." Plus-sized characters, after all, usually only make their way onto the screen if they're there as a punchline, or maybe as the "before" to the newly-beautiful-and-thin character's "after" (ugh). But this time, Holliday gets to be a beautiful cover girl, just as she is — no transformation required. Capon wrote,

I've seen Kim Kardashian's naked body more often than I've seen my own, and I dread to think how much time I've wasted waiting for my own 'summer transformation' ... But when I saw that cover, with Tess looking like an absolute McVitie in her emerald green silk lingerie body, I thought she looked so incredibly beautiful. I saw her tattoos, her thick thighs, her boobs, and I could have cried, because if I could see her beauty, maybe there was beauty in my body too.

That's a sentiment that Holliday herself noted when she shared the cover on Twitter in late August: she wrote, "If I saw a body like mine on this magazine when I was a young girl, it would have changed my life." And the tweets of support coming in prove that she's far from being the only one:

Yet, Morgan definitely wasn't alone in claiming that the cover was somehow promoting obesity — despite the fact that, in a recent appearance on Good Morning Britain, according to The Guardian, Cosmopolitan editor Farrah Storr told him outright that the notion was totally ridiculous and "patronizing." That seems to be largely because of the long-held assumption that being anything but thin is simply about self-control: being fat means you have failed, that you lack the discipline to "eat well and exercise," that everyone can — and should — have a body size that fits within a pretty narrow window of acceptability. And if you don't? Well, you should at least be working on it at all times.

Anyone who has struggled with weight can easily confirm that that it's much more complex than simply having willpower, and critics who fat-shame using the argument that bodies like Holliday's should be judged because "they aren't healthy" are not only assuming *a lot* about other people's medical histories, they're also conveniently forgetting that there are plenty of unhealthy things thin people do all the time that they aren't constantly criticized for.

What's often overlooked though amid the "health-centered" obesity arguments, is that, even if Holliday were unhealthy, even if she were making bad choices for no good reason, it still doesn't mean she deserves to be ostracized, and it certainly doesn't mean she should spend the rest of her life fighting to be different when she could just love and accept herself as she is.

That might sadly seem like far too radical of an idea for all the online trolls masking their cruel comments with fake concern for Holliday's well-being, and unfortunately, the judgement isn't likely to end anytime soon. But just as her Cosmo cover has shown that all bodies deserve to be celebrated, her clapback also shows exactly why fat-shamers' opinions shouldn't be taken seriously.