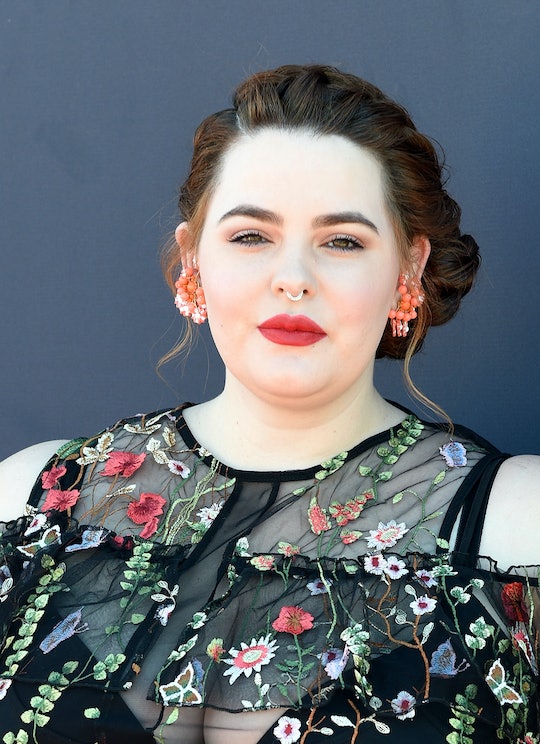 Along with being a body positivity advocate and inspiration to girls everywhere, Tess Holliday is also a mother to her son Bowie. So, when she's not spreading her fearless confidence on magazine covers and social media, she likes to speak the truth when it comes to parenting. Most recently, Holliday called out the grossest thing about being a parent and even though you deal with it daily, you're probably going to cringe.

In a recent interview with People, Holliday opened up about her new book, life with her little ones, and how motherhood has changed her. One of the questions she was asked by her interviewers was the best and worst parts of parenting.

"I think the best part is no matter if you're having a bad day, when they smile or do something, there's nothing like that joy that it brings you. It's incredible," she told People about what she loves most about being a mom.

As for her least favorite part of parenting, she told the magazine, it was both realistic and cringe-worthy: "The worst thing is all of the body fluids. I've gotta say. Even when they get older, ya know, it's just so much."

In that same interview, Holliday touched on her relationship with her own mother and how it prepared her for motherhood. It seems that her attitude of open-mindedness and acceptance — even when it comes to boogers, snot, and drool — is an inherited trait:

My mom taught me to always support your child. She didn't always agree with me. She took me to get my first tattoo and then I kept getting them and she hated it. And she thought I was going to grow out of this phase — and that's why I put in the book, "Sorry mom, it wasn't a phase," but she supported me even if she didn't always agree with me. And I think it's really important.

This isn't the first time that Holliday has opened up about her family and the struggles that come with being a mom. In a tearful Instagram post back in February, she explained the difficult reality of being a mom. Exhausted and overwhelmed by her young baby, she wrote:

I've been up since 3 am, & every time I get Bowie to sleep & try to lay him down, he wakes up. He is teething & has no clue I have to work today, & most days I can work 15 hour days, take care of both boys & put some lipstick on & deal with it. Most days I drink my coffee & smile at every little thing he does thinking it's the best thing in the world, but not today. I've been crying for nearly two hours, & I'm crying as I write this.

As a model, personal appearance is a topic constantly on Holliday's mind. Later in that post, she pointed out the difficulty of looking "good" while being mentally and physically drained by parenthood:

I've reached my limit, exceeded it to be honest. My confidence has taken a blow with this birth & it wasn't until this morning I realized why. The pressure of "looking good" for a living is too much today. When your face is breaking out from the hormones of breastfeeding + total exhaustion from lack of sleep, bags under your eyes, patchy red skin & to top it off no energy to work out or leave my bed.. how do you do it? How do you feel confident in your skin & feel like you aren't letting the client down by showing up exhausted & disheveled?

She ended that post with a call for compassion and understanding for mothers, rather than the "perfect mother syndrome" that says she is fighting against. "I hope one day that changes & society views mothers as the flawed human beings we are that are just trying to keep our sh*t together like everyone else," she wrote.

Despite the late nights, bags under her eyes, and "body fluids," Holliday doesn't regret the path that her life has taken. She clearly loves her family and, with the exception of needing "to sleep more," she said in the same People interview, "I am incredibly grateful to have the life and stability that I have."

So, not only is she a badass model and role model to all women, she's an amazing mother to boot.