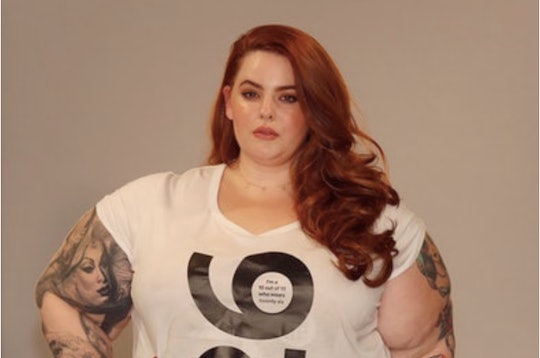 Being a model in the age of social media certainly has its advantages. Celebrities of all types can connect with their fans, while sharing more about their personal lives and promoting their brand. What's not to love? Well, the trolls, for one. And then, as Tess Holliday found out the hard way, there's the low-life scum that steals personal photos and transforms them into terribly insulting jokes for the world to see. Fortunately, Holliday's fans are not having this body-shaming meme of her pregnant body.

As first reported by Revelist, an Instagram account with the handle @jokesfails recently posted a decidedly not funny side-by-side shot of a thin, blonde model clad in a bikini — Candice Swanepoel — next to a photo of Holliday. The text above the woman on the left simply reads, "Noviembre," while "Diciembre" hovers above Holliday. Romper's request for comment from the Instagram account was not immediately returned.

Now, I don't speak Spanish, but it's pretty easy to figure out what the meme is insinuating. Allow me to spell it out for you: In November, we're all skinny and gorgeous, while in December — after eating all of the delicious holiday food — we are fat. LOL. Only not.

Because yes, Holliday happens to be a plus-size model and is obviously curvier than the woman on the left. But, as the mom of two pointed out herself in the comments section, she also happens to be heavily pregnant in this photo. Holliday didn't waste any time with inserting herself in the conversation. She shared a screenshot of the image on her Instagram Story, as Revelist reported, with the caption, "I'm pregnant here. And somehow this is supposed to be funny?"

Holliday also commented on the photo itself, writing: "I’m pregnant in this photo & your memes aren’t even f*cking funny. That['s] the real failure here."

Thankfully, Holliday's dedicated fans came to the rescue and told off the pathetic person behind this Instagram account. (I have to give it to whomever created the account because "jokesfails" is pretty darn accurate.)

"I do understand that the ignorant fool who made this post was trying to be 'funny' but do you understand that the glorious fat girl that they’re using a photo of is actually a human being?" one Instagram user wrote. "Not only that she was pregnant when this photo was taken. Fat people are humans too, AND we have feelings. So why don’t you stop acting like a cactus cause you’re being a real prick."

Another person commented, "This is disgusting. Don’t disrespect Tess Holliday."

Yet another Instagram user went heavy on the explicatives, writing, "Whoever did this is a f*cking tw*t. @tessholliday looks f*cking stunning, and killing being pregnant. I'm not even pregnant and don't even look that good. A**holes."

"I just reported you to Instagram. I encourage everyone to do the same! You are a bully and your behavior on Instagram is NOT OK!" another Instagram user quipped. "And...you are not funny. @tessholliday I admire you, you are in my world my December calendar lady!"

And this commenter pretty much hit the nail on the head, writing, "So sad how you guys used her photo to make her seem like a joke, the only ones I see that are a joke is this page. This is bullying at its finest. I bet you make a joke out of everything because deep inside and out you are insecure about yourself."

The photo on the right was actually lifted from an Instagram post Holliday had shared when she was pregnant with her second child, Bowie Juniper. (Whom she gave birth to back in June 2016, according to E! News.) Ironically, the plus-size model was addressing body-shaming pregnant women in the caption's message.

"As I enter my 8th month, my body overall looks the same other than my belly & I'm okay with that," Holliday captioned the photo. "What I've had to be learn to be okay with (WHICH IS NOT COOL) is the fact that people still think it's okay to comment on my body."

"You don't look pregnant", "you must be have quadruplets", "you are putting your baby at risk" & a slew of other uneducated statements that are very far from my reality. When "celebrities" are pregnant in the press, they look glamorous, toned & are eager to talk about how they are going to get the baby weight off. While I've done my best to look as put together as possible, that's not real life, & it's not for most women. I'm not the first plus size woman in the public eye to have a baby & share it with the world, & I certainly won't be the last. However I'm part of a small minority that's telling you it's okay to not have a perfect baby bump, or not show at all, to be plus size & have a healthy child, & most importantly to find a care provider that doesn't shame you about your size. It's also okay to tell someone to fuck off when they give you unsolicited advice about what's "best" for you & your baby. As women, we know what's best & that's our business.. No one else's.

Obviously, there's some sort of language barrier going on in the creation of this meme. Perhaps the person who stole Holliday's photo had no idea what their words meant, and was only on the prowl for a photo of a curvier woman. Unfortunately, this person chose the wrong curvy woman (and her fan base) to mess with. Body-shaming — and in this case, pregnancy body-shaming — is never OK. And it's definitely not funny.