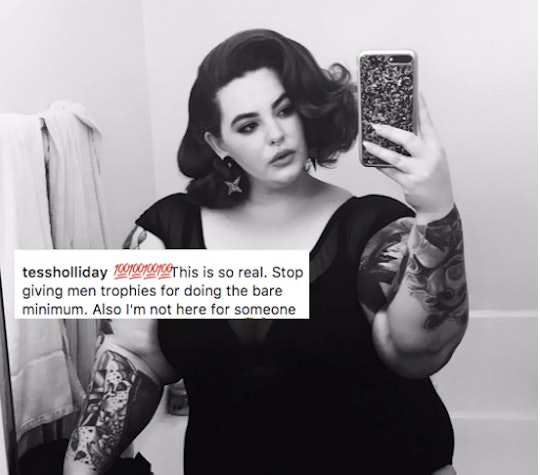 Everybody and their mother seems to have an opinion about one husband's viral Instagram post. While many people have praised Robbie Tripp's sentiments, Tess Holliday's response to the guy's viral post about his "curvy" wife shows that he may not be doing the world as big a favor as he thinks.

With her response, Holliday has joined the legions of social media voices speaking out against Tripp's admittedly flawed love letter. The majority of the reactions from the public following his post detailing his preference for "girls on the thicker side" and praising his wife's "curvy" shape were decidedly positive. However, attitudes quickly turned and critics of the post, including Holliday, have called it self-serving.

Tripp’s initial post contained an intimate photo of himself and his wife apparently sharing a special moment on the beach. After he shared it on Instagram last week, it has racked up more than 30,000 likes. Within the post's long caption, Tripp said:

For me, there is nothing sexier than this woman right here: thick thighs, big booty, cute little side roll, etc. Her shape and size won’t be the one featured on the cover of Cosmopolitan but it’s the one featured in my life and in my heart.

Not everyone is a fan, though. Holliday is a 32-year-old self-proclaimed plus size model and body positivity advocate who has not shied away from sharing her opinions. She has used her loud voice over social media well and has taken on serious issues, such body shaming and trans-phobia, without hesitation.

This is so real. Stop giving men trophies for doing the bare minimum. Also I'm not here for someone who says transphobic things. #effyourbeautystandards#transwomenarewomen

Other critics of the post have pointed out the flaws in Tripp's logic. Some have even gone as far as to suggest he is fetishizing his wife's body. One comment on his post accused him of self-congratulation instead of actually praising his wife, writing: "This is incredibly insulting to your wife. Women of all shapes and sizes are beautiful. Putting yourself on a pedestal for being with her is arrogant."

This post seems to suggest that there is a better way to express your love for the body that holds your soulmate than how Tripp explained his. And Holliday was happy to point that out:

Whether you side with Tripp or Holliday, both of their viral posts have gotten people talking about body positivity. The conversational nature of social media allows us to hash out difficult ideas, such as how to properly praise your goddess of a wife and grow as a society. And in this instance, props to Holliday for using her voice and sparking an important debate.