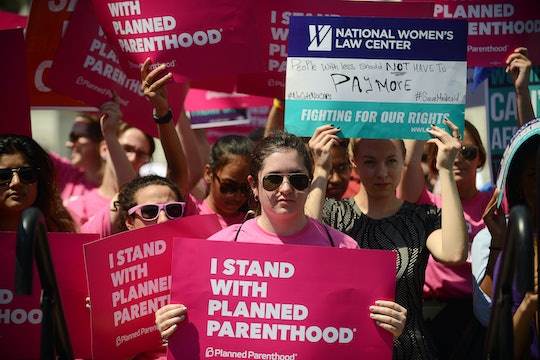 Texas has sumitted a request to the Trump administration for a waiver that would allow it to exlude Planned Parenthood, as well as other organizations that provide abortions, from a portion of the state's federal funding. In submitting this request, Texas is threatening women's health by setting a disturbing precedent for circumventing existing requirements for funding of crucial women's health services. Four years ago, the state lost its federal Medicaid funding after excluding Planned Parenthood and similar organizations from participating in its family planning program. Its recent request is an attempt to get that money back.

If the waiver request is approved by the Trump administration, Texas will be legally able to repeat its exclusion of Planned Parenthood without any repercussions. The precedent of such a scenario would likely allow other states to do the same. Jennifer Popik, a federal legislative director at National Right to Life, an anti-abortion group, spoke with The Hill about what this request could mean around the United States:

This would have implications nationwide if this gets approved. For an administration with a pro-life focus, this is something they could do to divert funding from Planned Parenthood.

The Texas request is part of a long string of efforts by the GOP to take federal funding away from Planned Parenthood, much of which comes from Medicaid. As it stands, the women's healthcare provider could lose its funding for an entire year under either Republican health care bill.

Justification for the party's vendetta against Planned Parenthood has been focused around its offering of abortion services, despite the Hyde Amendment's prohibition of federal money being used to cover abortion procedures. President Donald Trump has also indicated he would support efforts to block federal funds for Planned Parenthood. In fact, the president recently signed a bill that essentially encourages states to halt other federal funding from benefitting Planned Parenthood.

Four years ago, when the Texas government excluded Planned Parenthood and other abortion providers from federal family planning for low-income women who do not otherwise qualify for Medicaid coverage, President Barack Obama stopped the state's funding. The loss came out to about $35 million a year. Obama stated that federal law prohibited this sort of exclusion and granted Medicaid patients the ability to choose "any willing provider," even those that provide abortions.

After losing its federal funding, Texas created "Healthy Texas Women," a state-funded program. It is now asking for its federal money back with the intention of continuing the exemption of abortion providers, such as Planned Parenthood.

Texas has already attempted to defund Planned Parenthood in the past. The Washington Post reported that, in 2011, the state cut its two-year family planning budget from $111 million to $38 million with just that goal in mind. The outcome of this attempt did little to nothing to reduce abortion rates in the state.

Instead, 82 family planning clinics closed or cut family planning services due to lack of funding. Two-thirds of these clinics were not even run by Planned Parenthood. The clinics that did remain open operated under limited hours and found themselves unable to offer the more effective methods of contraception, such as implants. Most astonishingly, the budget cuts took away or limited access to primary care providers for a large number of women across the state.

With its previous cutbacks having such devastating outcomes for the women of Texas, as well as the clear restrictions of the Hyde Amendment, it is hard to imagine how this request has actually reached the Trump administration. Planned Parenthood spokeswoman Danielle Wells said it best in an official statement, “Texas paints a grim picture of what health care access could look like nationwide if the Trump administration approves this waiver."