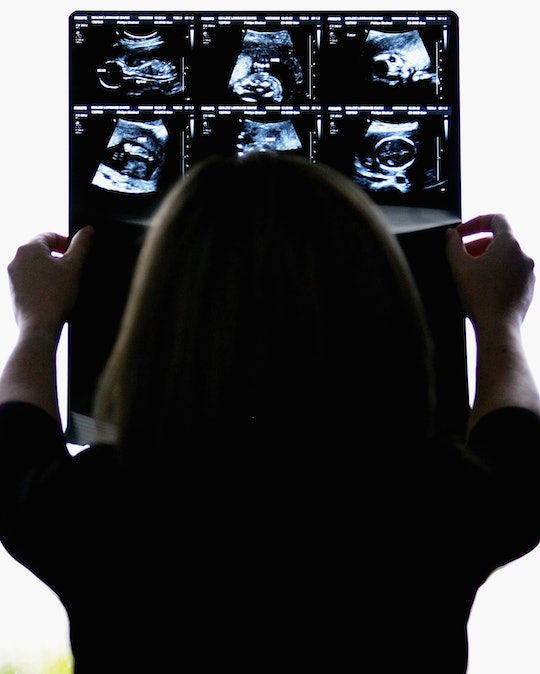 Reproductive health has been a hot button political topic for decades, but after the 2016 election, there's been a resurgence of debate particularly with concern to access. Over the last several months, a slew of legislation has cropped up from predominantly male lawmakers all over the country that aims to strip access to reproductive healthcare. One such bill, however, goes beyond violating constitutional rights and into medical ethics: Texas lawmakers support a bill that would allow doctors to lie to women about the health of their fetuses, according to the Texas Tribune.

On Feb.28, the Texas Senate Committee on State Affairs unanimously passed a bill with the intent of protecting the state's doctors from "wrongful birth" lawsuits by parents if their babies are born with a disability, according to Refinery 29. Through medical malpractice, patients have been able to sue their doctors if their baby is born with a disability and they feel that their physician either withheld information from them or failed to determine that the fetus had abnormalities. The suits, then, are usually for damages to offset the costs incurred from raising a child with special needs, according to the SE Texas Record. Parents often sue because they say, had they known about the disability, they would have chosen to abort the pregnancy.

The bill was introduced as a means to protect Texas' physicians from malpractice in these cases, but such cases of "wrongful birth" are fairly uncommon in the state, according to the Dallas News. The Dallas News also reported that, last year, when the initial panel was hearing testimony in preparation for the bill, the Texas Medical Board reported it has only received five "wrongful birth" complaints in the last decade — three of which were dismissed.

The impetus for the bill, then, is a bit unclear — but it became clear when the committee heard testimony from advocates who were for and against the bill. Before the vote, the committee heard testimony from both sides of the argument, which, like many reproductive health issues, boiled down to pro-choice versus anti-abortion stances. Those who are pro-choice pointed out that, if doctors are worried about lawsuits, the bill gives them permission to withhold information about the condition of the fetus from parents should the fetus have a disability and the doctor wants to prevent an abortion. That means the bill would give doctors a loophole through which to use their moral or religious beliefs in their interactions with patients.

Those who are anti-abortion shared concerns that if parents were informed that the fetus would carry a disability, physicians may encourage them to abort (or, the parents may decide based on that information to abort of their own volition, and not necessarily because a doctor has recommended it).

Those in the anti-choice sector are particularly worried about its potentially nefarious intent. Jennifer Allmon, executive director for the Texas Catholic Conference of Bishops, said of the bill during the hearing, according to the Texas Tribune:

We believe that a lawsuit that begins as its premise that ‘we should’ve had the opportunity to kill our disabled child’ sends a terrible message to those disabled children in Texas. To hold a physician financially responsible for a disability he did not cause presumes a level of control over human development that physicians and parents simply do not have.

Regardless of which side of the abortion argument you're on, the fact that the bill explicitly allows physicians to withhold information from patients is an unfathomable breach of medical ethics. The American Medical Association makes it very clear that withholding information from patients about their health is ethically unacceptable. The exception to this rule in the practice of medicine — and it is an exception, and not a universally agreed upon one — is something called "therapeutic privilege." In the AMA Code of Medical Ethics, it states that physicians can invoke therapeutic privilege if giving information to a patient about their health would cause such severe psychological harm that it would actually interfere with their medical treatment. In a practical sense, what this means is that a physician may decide to delay discussion until a patient is out of emergency care, or is surrounded by family members for support — not that they completely withhold the information permanently, or "lie by omission" about the state of their health.

That being said, physicians are also expected to respect a patient's wishes: if a patient does not want to be informed, that's their right — as is their right to refuse treatment altogether. That being said, there is another critical term in medical ethics to understand: informed consent. A patient must be given informed consent about treatment, and make their decision accordingly. Now, the issue of informed consent is tricky, because some argue that doctors may not give patients information that they can easily understand and use to make decisions about their healthcare — but for the purpose of discussing Texas' bill, the concept of informed consent matters more broadly: the fact that it exists, and that doctors are meant to adhere to it somewhat precludes them withholding information from a patient.

Where bills like Texas Senate 25 and the practice of medicine intersect is their paternalistic natures: the idea that patients don't know how to make decisions in their own best interest, so doctors (or in Texas' case, politicians) need to do it for them. The bill creates something of a legal loophole that could justify a physician withholding information from patients that endangers not just the mother, but potentially the fetus as well. The totem of medicine — "first, do no harm" — then becomes convoluted: do no harm to whom?

In the practice of medicine, there's no shortage of difficult situations that need to be handled with sensitivity and respect. But the greater ethics that preside over the practice of medicine are meant to give patients agency and dignity in their decision-making. While the bill in Texas has been framed as protection for physicians, it doesn't seem to address the concerns that many have about the safety and wellbeing of patients. During the bill's hearing, one speaker asked the committee if they had considered that the bill could give physicians grounds to impose their own moral beliefs on patients. Not one member of the committee was able to give a response.