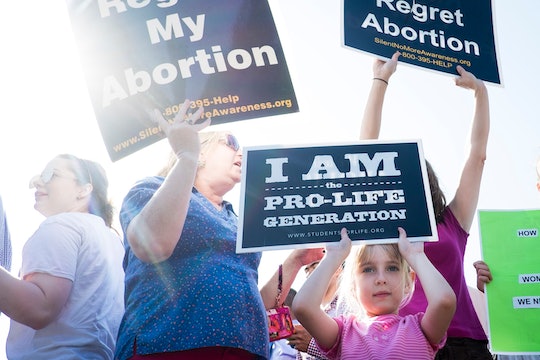 Despite it being 2017, a year in which you'd think women would by now be deserving of enough credit to be able to actually make their own medical decisions, the long-fought battle over reproductive rights in America continues. Anti-abortion laws in Texas are some of the strictest in the country (and don't appear to be lightening up anytime soon), so in response, a Texas rep. filed a bill that fines men $100 for masturbating. Though the "satirical" bill isn't expected to actually pass, it does an incredible job at highlighting the unfair double standards women face when it comes to their autonomy over reproductive choices.

Introduced by Texas Rep. Jessica Farrar, H.B. 4260 — aka, "The Man's Right To Know Act" — was introduced Friday, according to The Texas Tribune, and takes aim at what many consider to be the state's unfair reproductive health laws. Playing on anti-abortion rhetoric, H.B. 4260 proposes that any man who ejaculates outside of a vagina or masturbates outside of a hospital or clinic would be committing an "act against an unborn child, and failing to preserve the sanctity of life," and would therefore be subject to a fine. The act would also require the creation of a mandatory booklet designed to be given to men seeking vasectomies, prescriptions for erectile dysfunction medications, or colonoscopies, outlining both the benefits and risks associated with each, and would give healthcare providers the right to refuse their patients elective vasectomy procedures or requests for Viagra based on their "personal, moralistic, or religious beliefs."

If that sounds extreme, well, it probably should. The notion of legislating against men ejaculating for non-babymaking purposes, or requiring them to jump through hoops to access medical procedures seems (and is) unnecessarily restrictive, and clearly infringes on their ability to make their own choices. And yet, for women in Texas (and in many other states throughout the country), it's a reality they know all too well.

According to The Independent, Texas law currently requires that women seeking abortions wait at least 24 hours between obtaining a mandatory abortion consultation and actually having the procedure. And before being allowed to have the abortion itself? Patients are also required to have a mandatory transvaginal ultrasound, during which time they have to listen to heartbeat of the fetus. Not only does that seem cruel and invasive, it also happens to be completely medically unnecessary, so Farrar made sure to include a similar stipulation in her bill as well: under H.B. 4260, a man who wants to have a vasectomy must also wait at least 24 hours to ensure his consent is informed, and would be subjected to an equally-as-invasive "digital rectal exam" beforehand (fair is fair, right?).

Even though it seems reasonable to assume that any man requesting a vasectomy or Viagra would be aware of the implications of his decision, The Man's Right To Know Act also assumes that, in addition to the waiting period, he couldn't possibly understand the true risks involved without having state-mandated information disseminated to him in advance. Again, that seems preposterous, but in Texas, that's also been written into law when it comes to women and abortions.

According to Planned Parenthood, the 2011 "Women's Right To Know Act" requires physicians to provide women with a 22-page document published by the Texas Department of State Health Services that outlines "medical risks, adoption alternatives, and developmental stages of the fetus" at least 24 hours ahead of performing the procedure. The document reminds women that "no one can force [them] to have an abortion," and urges them to discuss "the medical risks of having an abortion," with their doctors as though it were a high-risk procedure.

But what it fails to mention is that abortion is not a high-risk procedure at all: according to Reuters, a 2012 Obstetrics & Gynecology study found that women were actually "about 14 times more likely to die during or after giving birth to a live baby than to die from complications of an abortion."

If that weren't already enough, the document also includes a section on fetal pain, images of a developing fetus, and a section outlining abortion risks (including death, future infertility and breast cancer, based upon the idea that women who have abortions miss out on the "protection" against breast cancer that giving birth may potentially provide). It also provides information about "Safe Haven" laws for those "weighed down by the job of being a parent," and side effects of abortion procedures, before then wrapping things up with a photo of a happy-looking woman holding a baby.

Although Farrar told The Texas Tribune that she didn't expect the bill to pass, enforcing restrictions on men was never the point, anyway. Farrar said,

What I would like to see is this make people stop and think. Maybe my colleagues aren’t capable of that, but the people who voted for them, or the people that didn’t vote at all, I hope that it changes their mind and helps them to decide what the priorities are.

What's perhaps most valuable though about Farrar's bill is that it helps reframe the debate about the Texas laws away from the moral or religious argument about whether abortion is wrong. Because even if you are not supportive of abortion, even if you do not like the idea or would never choose it for yourself, the reality is that lawmakers in Texas have repeatedly passed laws that interfere with individual rights to make informed healthcare choices.

When we think about placing medically unnecessary rules on men due to the implication their decisions have on the ideological value of the right to life, it seems unfairly restrictive — and, let's be honest, also pretty insulting. But what Farrar has so brilliantly noted is that if her bill bothers you, perhaps it's time that the laws already affecting Texas women bother you, too. Because while the bill may be satirical, the restrictions being placed on women are very real.