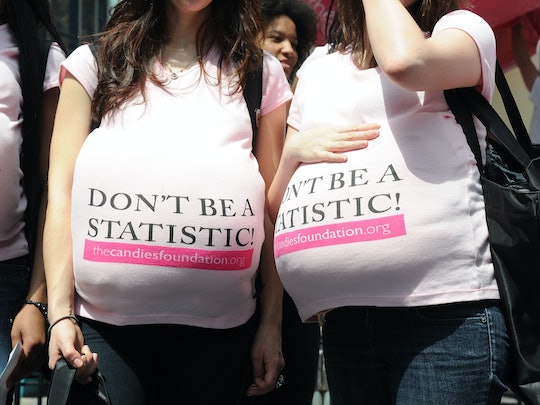 Why Texas Teen Pregnancy Rates Are Dropping So Slowly

Teen pregnancy in the United States has been a hot-button issue for some time. Fortunately, the number of teen pregnancies in America has been on the decline in recent years, thanks to advances in birth control, education, and teens choosing to delay their engagement in sexual activity. Teen pregnancies in Texas, however, are some of the highest in the country. The Longhorn State's dependence on abstinence-only sex-ed classes are, at least partially, to blame for these high numbers.

In 2016, The Texas Campaign to Prevent Teen Pregnancy reported that Texas is not on-par with the rest of the nation in reducing teen pregnancy. In an interview with NPR, the organization's CEO, Gwen Daverth, pointed to the state's policy as a main cause of Texas teen pregnancies:

What we see is there are not supports in place. We're not connecting high-risk youth with contraception services. And we're not supporting youth in making decisions to be abstinent.

A shocking 84 percent of Texas school districts offer abstinence-only education, with a quarter teaching no sex-ed at all. The resulting teen pregancy rates, 35,063 total births in 2015, place Texas at number five in the country for births by state, and first in repeat teen pregnancies.

Studies have shown that abstinence-only education is not only ineffective, but also potentially harmful to the public. According to a report by Legal Momentum, an organization for the legal rights of women, abstinence-only sex-ed fails to effectively delay teen sex and leaves students uneducated about safe sex and therefore more likely to contract STIs.

Additionally, the report finds that these programs often stigmatize LGBTQ communities by failing to address their sexual concerns at all. The programs also disparage single parents and children born outside of marriage, as federal funding requires educators to teach students that having children out of wed-lock is harmful to both children and parents, causing them to present monogamous, marital relationships as the only healthy context for child rearing. Sexist undertones in the curriculum re-inforce the archaic image of women and girls as submissive, robbing them of the ownership of their own desires and actions.

Despite the potential harm and lack of success of abstinence-only programs, they remain prevalent throughout much of the United States. These programs reign supreme in Texas public schools as well as a number of private and public organizations throughout the state.

The Centers for Disease Control recommends "evidence-based teen pregnancy prevention programs," which can include but are not limited to abstinence-only, in conjunction with access to contraceptive and reproductive health resources that cater to a younger demographic.

Fortunately, more districts in Texas appear to be adopting an "abstinence-plus" curriculum, where abstinence is still promoted but information is provided on other contraceptive methods as well as STI transmission. One can only hope that this trend continues.