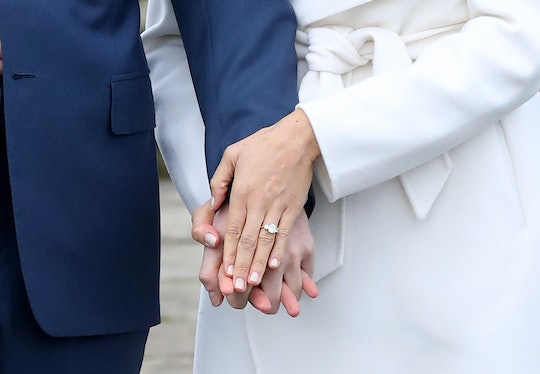 Thanks, But Meghan Markle's 36-Year-Old Uterus Does Not Need Your "Concern"

As soon as the Clarence House announced that Prince Harry and American actress Meghan Markle were engaged, chatter about a future pregnancy quickly followed, specifically whether Markle, at 36, is "too old" to be having children. If you've ever paid attention to our culture and the way in which a celebrity woman's impending nuptials are reported, scrutinized by fans and foes alike, and questioned relentlessly by people who have no actual, personal stake in someone else's life decisions, it's not surprising. But make no mistake, soon-to-be royalty or not, Meghan Markle's age, potential future pregnancy, and how the two coincide is no one's business, and speculating on that front harms way more women than just Markle.

The bride-to-be is no stranger to the pressures of existing in the public eye. As a successful actress, playing Rachel Zane on the legal drama series Suits, and previously playing Special Agent Amy Jessup in the sci-fi thriller Fringe, Markle has endured her fair share of public perusal and paparazzi pressure. But the dial was turned up when she started publicly dating 33-year-old Prince Harry in October of 2016. Prior to the couple's engagement announcement, media outlets and Royal watchers were consistently questioning the couple. Headlines asked "Are Meghan Markel and Prince Harry getting married?" and media outlets supplied fans with clues on "How to Know When Prince Harry and Meghan Markle Are Engaged." MSN even offered up "The One Reason Prince Harry Hasn't Proposed to Meghan Markle Yet." Now that their impending nuptials have been confirmed, the public has shifted their curiosity to that of a future royal baby and, apparently, how Markle's age could potentially interfere with a pregnancy. Not Prince Harry's age, mind you. Just Markle's.

Nevermind that it is no longer unusual for a woman not to have a child until age 36. According to a 2016 report published by the National Center for Health Statistics, women in the United States are waiting longer than ever to have their first child. "Fifteen years ago, the mean age of a woman when she first gave birth was 24.9 years old. In 2014, that age has risen to 26.3, "according to the report, which covered pregnancy trends from 2000 to 2014. It's also a positive sign, according to NPR, as the aforementioned study is a result of a decrease in the number of teen moms, dropping from 23 percent to 13 percent. In fact, according to a report by NBC Washington, women over the age of 30 are having more babies than younger moms.

Markle is an adult, capable of making her own reproductive choices, and in an informed matter that will ensure the safety of herself and any growing fetus she decides to house inside her own body. Her decision to wait to have children (which is an extremely personal one, by the way) is a common one that plenty of working women with high power careers are making. And in many other countries, according to the Central Intelligence Agency (CIA), the mean age of a woman when she decides to become a mother is well over 30.

It is, of course, harder to get pregnant in your mid-30s than when you're say, 22. And yes, if you do, there is the bogeyman of "advanced maternal age," the oh-so-eloquent term that the obstetrics community uses to remind women that when you've hit the big 3-5, you have a higher risk of potential pregnancy, labor, and delivery complications, including but not limited to: a higher risk of miscarriage, Down Syndrome and chromosomal abnormalities detected in the fetus, diabetes, and hypertension, according to American Pregnancy.

But any educated woman knows that. I promise you, Meghan Markle is not counting on the internet to inform her of the state of her uterus.

What is less known — and gives you a reason not to make childbearing your first priority in adulthood, if you don't want it to be — is that the aforementioned risks can be carefully monitored and screened for, just like any other pregnancy. Dr. Lynne Lightfood, an OB-GYN practicing in Washington, D.C., told NBC Washington News the following when it comes to the increased risk of pregnancy complications after the age of 35:

"All those things can be followed [and] managed appropriately. They shouldn't deter people from getting pregnant."

So if the idea that Markle is somehow "behind" for not popping out a kid earlier in her life is not exactly accurate. But it's also sexist. Why is Prince Harry excluded from this problematic narrative? After all, he hasn't procreated either, and he's only two years away from turning that dreaded 35.

A 2016 study published by The Proceedings of the National Academy of Sciences found that as men get older, their sperm deteriorate. In fact, the study concluded that it's likely "damaged sperm of older men is a significant factor in certain specific birth defects and in increasing the risk of abnormal pregnancies." Make no mistake, Harry is a young man, key word being "man." But even if he weren't, he would subject to the kind of scrutiny Markle is already enduring. Because while he is young, so is Markle. The focus on Harry's bride-to-be's age perpetuates a narrative whereby all responsibility for fertility and a genetically, developmentally healthy child is on women. Men far older than Harry are rarely under the microscope for procreating past 50. Where is the judgment for them, when they wait to have a child? Why are they OK with their younger, perfectly healthy sperm growing more and more decrepit and useless by the day, to the point that they could put their partners and fetuses in harm's way?

Focusing only on Markle's hypothetical maternal age keeps the intense examination of women's reproductive choices going, and all but guarantees men are not subjected to the same.

And there's one more front on which the weighing of Markle's reproductive aptitude is totally bogus: It distracts from much more important, pressing, and dire issues surrounding pregnancy, labor, delivery, and maternal and infant health we could all, collectively, focus on.

In the first three months of 2015, at least 235 anti-choice bills were introduced in various state legislatures, attempting to create and/or fortify barriers to abortion access. In Britain, if a woman has an abortion without getting the legal approval of two doctors, she could be given a life sentence in prison, along with anyone helping her. According to a 2016 report published in the September issue of Obstetrics & Gynecology, maternal mortality rate for 48 states and Washington, D.C. increased 27 percent. In the UK, 8.2 per 100,000 live births end with the mother's death. According to the American Journal of Public Health, only 273,000 women in the United States take maternity leave, on average, every year. According to the National Partnership for Women & Families, nearly 31,000 charges of pregnancy discrimination were filed with the U.S. Equal Employment Opportunity Commission (EEOC) and equivalent state agencies between October 2010 and September 2015. In 2013, the Equality & Human Rights Commission (EHRC) revealed that 54,000 women a year are forced out of their jobs due to pregnancy discrimination in the UK alone.

When, and if, a woman decides to have a child shouldn't be our highest concern. How she will be supported, cared for, and how she will continue to access to consistent quality and affordable health care, should be. And while the aforementioned will not be an issue for Markle and her future family, if she decides to have one, it was an issue for a large majority of the 6.7 million pregnancies in 2006. We can do better than scrutinize a woman's age when she decides to reproduce. We must do better.