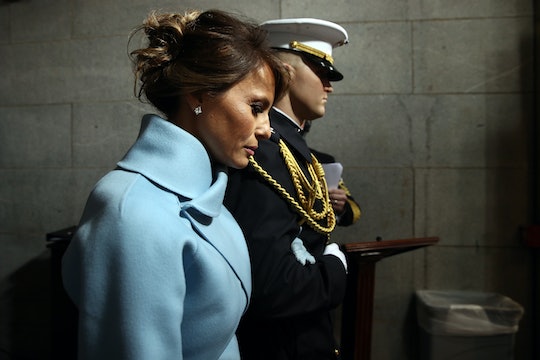 By now, you might have seen a clip making the rounds on the internet of President Donald Trump at his inauguration on Friday, turning to say something to wife Melania Trump, only for her face to suddenly fall as her husband turns back around. It was quick, but notable enough that people isolated the clip and started to speculate about what exactly the newest first lady was reacting to. It's gone somewhat viral on Twitter and Facebook, among other social media platforms, with some people making a joke out of it. But that clip of Melania's face from the inauguration isn't something to laugh at.

Reactions to the clip have varied. Some people immediately made a joke-y meme out of what President Trump could have said to Melania to make her react in such a way. Others immediately became concerned — while the moment may have been brief, it signaled to many that something more serious could be going on there.

Still others stated that she's a powerful, privileged woman, and they have little sympathy for her. Many had mixed feelings — while Melania Trump may be a powerfully placed woman who has done some damaging things (see: furthering the Obama "birther" controversy), some have speculated that possible signs of trouble in her marriage — based on the clip and other interactions between Melania and her husband — are nothing to joke about or scoff at.

Reactions to the clip were, again, mixed, with several Twitter users having their say on what they saw in that moment. ASDisappointment (‏@ErciaKatlovich) said: "Every time I see the gif of Melania's face falling, it breaks my heart. That reaction resonates so strongly with me."

And Kaelan Rhywiol (@KaelanRhy) tweeted," The image of Melania's face aft T turned around haunts me tonight. I don't like her/politics, but damn. What she must be going thru tonight."

It's important to note that it could've honestly just been a case of the camera catching the new first lady at a bad moment. Maybe she was feeling stressed, which would not be totally unbelievable considering what was happening that day.

But that wasn't the only moment that made people wonder. There were several instances in which Melania's body language seemed stiff, or where she didn't seem pleased to be present.

Mic.com turned to body language experts to try to explain her behavior, and they concluded that it "could be one of many signs of an unhappy relationship." About the Trump's going to meet the Obama's at the White House on Inauguration Day, body language expert and professional speaker Patti Wood apparently said via phone:

Not only did he not wait, he went up the stairs and greeted the Obamas...he didn't even look back to see if she was there or help her up the stairs.

He does not, as she comes to his side, hold her, greet her, bring her in close. He does a quick glance as if she was anybody and he doesn't touch her.

Between that and some of Melania's behavior at other points during the day, including the inaugural ball, many are speculating that there is trouble in paradise for the president and first lady. But others are going one step further, and wondering whether there might actually be manipulation or something more sinister at play in their marriage. It's important to note that there have never been any allegations of abuse from Melania, and that such notes from people on Twitter are not only intrusive, but are entirely speculative. Romper has reached out to the White House for comment regarding Mic's body language allegations and the rumors on Twitter.

Franchesca Ramsey (@chescaleigh), host of Decoded on MTV, broke down her feelings on the situation in several tweets.

"my feminism extends to women I don't like. I can disagree w Melania's politics & hope that she's not in an abusive relationship"

She went on to refer to the "birther" controversy that Melania previously contributed to.

Again, we can't know from a single clip or a few photos from the day that emotional manipulation or abuse is what's going on here. But if there is something more sinister happening behind closed doors, if the viral clip is indicative of that, it is certainly not something that we should laugh at.

Additionally, if the speculation were at all true (which there is no real proof of), evidence of it going public — like a clip causing people to speculate about it — could actually create further danger for a victim of abuse.

Melania is a bit of a polarizing figure for people. Her contributions to the whole "birther" situation and her willingness to pass off parts of a speech by former first lady Michelle Obama as her own words are just two examples.

And ultimately, much of her apparent politics and many of her past actions are nothing to laugh at. Her feeling uncomfortable or unsafe is also not something to laugh at. Making memes about how funny it is that she's "trapped" with Trump are unfounded, but, still, joking about a woman in a situation she doesn't want to be in is hurtful and insulting to women who are actually in abusive situations.

You can have mixed or downright negative feelings about the newest first lady. But her very public position, and her position as the wife of a man who has bragged about grabbing women by the genitals, make it so that speculating about her seeming unhappy or uncomfortable — depending on interpretation — is no laughing matter.

Domestic violence is never funny. Even if the clip in question was capturing a brief feeling of sadness or stress, making a joke of it is insulting to people who have actually suffered manipulation and abuse. If the clip has made you uncomfortable or brought up your own negative feelings about trauma from abuse, organizations like the The National Center on Domestic Violence, Trauma & Mental Health can help. Visit their site for resources and hotlines. If you feel you are in immediate danger, call 911.