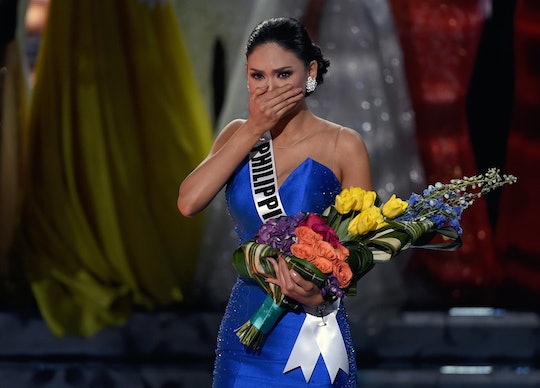 That Miss Universe 2015 Mix-Up Was Awful, But What's Happened In Its Wake Is Far Worse

On Sunday, comedian Steve Harvey made one of the biggest mistakes, flubs, blunders, faux pas, snafus — whatever you want to call it — in live television history when Harvey announced the wrong winner in the 2015 Miss Universe pageant. (Seriously, there are not enough words to describe the gravity of his transgression or his embarrassment.) After crowning Miss Colombia, Ariadna Gutierrez, the victor — and after taking a short celebratory walk — Harvey interjected, apologized, and redacted his statement: The title was actually supposed to go to Miss Philippines Pia Wurtzbach. The Internet went wild, with tweets expressing everything from excitement to shock to rage, some began pitting Miss Columbia and Miss Philippines against one another —and there were a few on social media and beyond trying (hoping?) to start a virtual catfight.

The good news is I don’t think we are going to get one. Because while those last few minutes of the Miss Universe pageant may have been the most cringeworthy in live television history — seriously, the moment Miss Colombia was forced to take the crown off her head was painful to watch — Wurtzbach and Gutierrez both carried themselves as true class acts. And I assume they'll continue to carry themselves with dignity and self-respect. In fact, in the immediate “aftermath,” Gutierrez was far from angry. She told interviewers, "everything happens for a reason," and thanked everyone who voted for and supported her.

Was she upset? Abso-freakin-lutely. But she didn’t point a finger at anyone — not at Harvey, not at the organization, and not at her peer, Wurtzbach. So why do we? Why do we think Wurtzbach and Gutierrez should be fighting? Why should these women "hate" each other?

I know some of the comments online have been made in jest. I know the situation sucks. And I know Gutierrez was — and probably still is — devastated, while Wurtzbach is elated but also feels “sad” for her peer and friend, but making them enemies — writing tweets and articles and blog posts about who “deserved to win” or about the anger, bitterness, and resentment they harbor towards one another ... you know, the feelings we assume they have — only seeks to disenfranchise all women. Which is against the very platform many of these women stand for. (Yes, I know much of pagentry still seems misogynistic: there is a bikini contest after all, and contestants are judged on their appearance — but as Lindsay Denninger of Bustle notes, this show features “a group of immensely accomplished women. ‘They’re educating young girls on sexual health ... [t]hey’re building acting careers. They’ve escaped war-torn countries to make their own dreams a reality.)"

This doesn’t mean Gutierrez can’t be upset or disappointed or even angry, and it doesn’t mean Wurtzbach cannot or should not celebrate her accomplishment. In fact, they both seem to be handling themselves just fine. (Wurtzbach has even said she wants “to apologize to her [Gutierrez ]for what happened.) What it means is that we, as a culture, still have a problem. We perceive women as catty. We expect nails to break and hair to fly.

Not all of us, of course. (In fact, on my own social feeds I've seen nothing but empathy for both women and host Steve Harvey.) The point is: let’s not tear each other down, but instead lift each other up. Women standing together and not putting each other down is much more powerful than any on-stage flub could ever be.