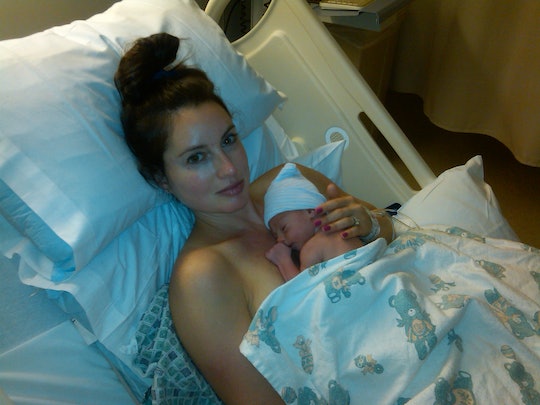 That Moment When It’s Too Late For An Epidural, & You’re Hallucinating

And now for the moment at hand, when Sam transitioned into a Neanderthal in order to bring her second son Earth-side. (Co-written by Sam and Haely)

Sam: My first birth unfolded with all the fanfare of a visit to H&R Block. The epidural was given at exactly 5 centimeters dilation and my baby boy arrived after three short rounds of pushing. My husband was up by my head, blissfully unaware his world was about to be as shattered as my vagina. My mom and doula were down in the trenches holding my legs, and, thanks to the tap dispensing anesthetic into my spinal column, I might as well have been having tea in a castle, pinkie out.

It all felt fairly civilized. Not to brag (*here’s when I brag), I looked like one of those models in the breast-pump stock photos who’ve clearly never birthed a human. Not a hair on my head had moved and absolutely nothing in the world could faze me. After the departure of baby, my cervix swung shut silently, like the pristine gates of Buckingham Palace. It was almost too easy, and there’s no way karma would let me get away with that.

Cut to almost exactly two years later: July 4, the same day these United States came screaming from the loins of a democratic ideal. My contractions were becoming hard to ignore, and my husband realized it was time to get this show on the road. I texted my lifeline (doula) and we drove to the hospital, me clenching my entire body as lighting bolts of pain shot through my core.

This time around, I had a New Birth Plan. I’m all about experiencing new things and I like to say I’m game for trying anything once (hence my 1997 commitment to Tae-Bo #YOLO!) ! My birth plan read like this:

I was determined to push this kiddo out without tuning out the lower half of my body. I’d heard whisperings of euphoria, a high like nothing else, a rush of unmatched oxytocin while feeling a baby emerge from the dark. Sounds like the closest I’d be to an orgasm for a while, so why the hell not?

I waddled through the halls of Cedar Sinai, doula by my side, as my husband sat with his iPad watching Carrie ingest another carafe on Homeland. Every time a contraction would arrive, my doula would whisper, “You can handle anything for 60 seconds.” Yes. Yes I can. (Again: Tae-Bo) We circled the halls for what felt like days and I was feeling super psyched. I was doing it. I had this. This was child’s play!

Screaming (me). Profanity (also me). My husband rushed to my side with a look of full-blown terror and maybe a tiny bit of respect?

As we wandered aimlessly, gravity fastening around my belly, I had a distinct vision. I was transported to a dense forest, and surrounded by all its native animals. Squirrels and raccoons were chanting to me, the birds’ song was bouncing off the towering trees. I was Queen of the Forest, Mother Earth, with my husband next to me in only a loincloth (hey, it’s my fantasy). I felt so raw and deeply in tune with nature.

Then: I got bitchslapped. I was transported out of that forest f*cking fast. I came to from my vision, faint and needing to get back to stable ground immediately. When my nurse Wendy came to check on me, she coldly reported I was “in transition.” No sh*t, Wendy. I’ve been in transition since I arrived.

My cervix had gone from a tight nickel to playing double dutch in the space of an hour. My body had lost all control of every function. Every. Function. I was shaking uncontrollably and had to pee and throw up at the same time, having become a human Instant Pot that could do it all. I couldn’t see straight and everything was blurry. I was rabid and crazed and needed drugs FAST.

Narrator: She wasn't getting those drugs.

The nurse happily informed me that my doctor was on the way, and we were past the point of having an epidural. That ship and its high tea had sailed.

Next there was pain. So much pain. Screaming (me). Profanity (also me). My husband rushed to my side with a look of full-blown terror and maybe a tiny bit of respect? I said things. Terrible things. Stuff like “when is the f*cking baby coming out?!”

The doctor appeared, looked inside, told me it was time to push, and my water broke like Old Faithful into her face. Not her first face shot, she barely winced as it cleared the decks. The pain ramped up to an eleven.

I was back in the forest now, but it had all changed. I was a Neanderthal. A wild animal, free of all societal and modern-day manners and skills. Gone were the happy animals and peaceful birds’ songs. There was tribal chanting, and a fire burned in a circle of which I was in the center. I could feel every bit of heat and rage and rawness. I could feel everything — the fibers of my cervix stretching like a rubber band before it snaps, the head parting the seas of my birth canal like Moses. The ring of fire. The infamous burning ring. My husband was there watching the Earth come barreling out of an exploding universe. Stars crashing to the ground.

Back to the hospital room, back to my body. Smiling, sweaty (and somewhat terrified) faces were staring back at me. A blond head of peach fuzz. Calm. Serenity. Euphoria.

They placed my sweet baby boy in my hands and he nestled in. This was it. The moment everyone had talked about. The high I wanted to experience. Like savasana after a kickass yoga class. That good ol’ oxytocin had hit me, and I felt nothing from the moments before. WHAT CERVIX.

My husband snapped a picture of me, our baby and the doctor, like he had two years ago. Only this time, my hair was ravaged like the fur of a wild beast who had just eaten his opponent, and my face was beet red and splashed with sweat. I was holding my baby, just like that scene in The Lion King, presenting him for the kingdom, no matter how much gunk he was covered in.

Like a soldier returning from battIe, I’d earned the highest badge of honor: the right to give unsolicited advice to those heading into the field. The first go around may have been dignified and Instagram-worthy, despite having lost feeling in my legs for 12 hours, but the second was even better than those transformational ayahuasca trips that no one will shut up about, even if my husband will never look at me exactly the same. So… what would I chose for a third go around? I can confidently say I want back into the scorching, unforgiving jungle where I clearly belong.

Last word from Haely: 8/10 embarrassings, 10/10 buckets of respect to the face. God bless the baby makers of the world! *Raises fist in air*

More Like This
Are You Leaking Amniotic Fluid Or Is It Normal Discharge? Experts Explain
Here's How To Keep Your C-Section Incision Dry
Are Boy Babies Usually Late? Signs Your Baby May Be Born Late
20 Bridgerton-Inspired Baby Names