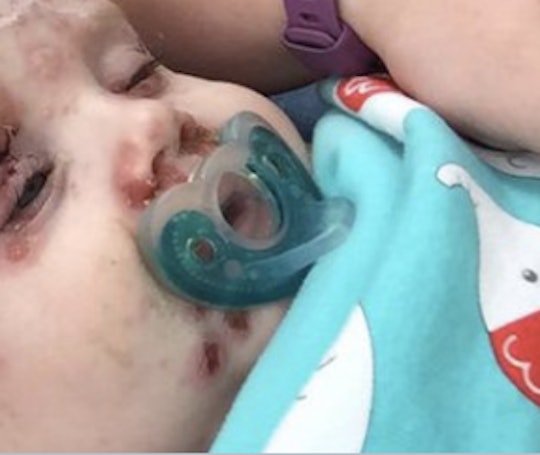 Research has proven, time and again, that vaccines are safe and help eradicate debilitating and potentially fatal diseases. Yet, despite volumes of scientific evidence in favor of vaccination, anti-vaxxers continue to use debunked information to disparage it. Now a graphic 2016 Facebook post is recirculating warning parents against the dangers of skipping immunizations. It's a well-intentioned plea from an understandably angry parent, but that scary photo of the baby with chicken pox is slightly misleading. (Warning: graphic image below.)

In June of last year, mom Kayley Burke of Brisbane, Australia, shared a photo of her then-11-month-old son Elijah, who had contracted chicken pox, as a plea to anti-vaxxers to vaccinate their children, according to PopSugar. Burke's post began making the social media rounds once again on Tuesday, most likely because the photo is horrifying. It's always hard to see a baby suffering, and in this case the visuals are particularly dramatic.

But, while the image of young Elijah is heartbreaking, Burke's overall message somewhat misconstrues what's at the center of the anti-vaccination issue. Yes, parents should get their kids the chicken pox vaccine, but what happened to Elijah is a rare occurrence. Parents generally don't need to worry about their babies getting chicken pox. Meanwhile, everyone should be very concerned about the other vaccinations people are skipping, like the one for measles, a previously eradicated airborn disease that is often fatal.

Burke's original Facebook post showed Elijah covered in scabs and rashes caused by chickenpox. According to The New York Daily News, the infection caused the 11-month-old baby to spend a couple of days in the hospital and be put on antibiotics. His parents also contracted chickenpox at the time, the Daily News reported.

According to PopSugar, the Australian mom pleaded with other parents to "vaccinate your kids." She wrote in her post as a word of caution,

Think about the risk you are putting on other helpless kids that are too young or who actually can't be vaccinated!

Burke's outrage makes sense. No one wants to see their children suffer from a contagious infection. But her frightening experience is somewhat tangential to the anti-vaccination debate. That's because, according to Parents, it's uncommon for an infant to become infected with chickenpox. And serious complications from chickenpox are also rare, although certain factors — like age and weakened immune systems — do elevate that risk, according to the American Academy of Pediatrics.

Moreover, rates of infection are still on the decline since the chickenpox vaccine program began in 1996, according to the U.S. Centers for Disease Control and Prevention. That's even with parents opting out of the two-dose vaccine, which is given to kids around 12 to 15 months.

In the meantime, another, more life-threatening illness is making a comeback because of the swelling anti-vaccination movement: Measles.

Right now, Minnesota is experiencing its worst measles outbreak in nearly 30 years, according to The Washington Post, and public health officials believe is connected to the increase in unvaccinated children. Similarly, in 2014 California saw a measles outbreak after an initial exposure at Disneyland. The state's Department of Public Health linked the outbreak to parents opting not to vaccinate against the disease. Other measles outbreaks have occurred across the U.S. since the U.S. Centers for Disease Control and Prevention declared the disease eliminated from the country in 2000. The CDC documented a record number of more than 660 measles cases from 27 states in the last 16 years.

Although Burke's post does conflate a non-life-threatening incident with a major public health issue, it still raises awareness of one important point: Vaccinations have been proven to be safe and save lives. When parents don't vaccinate their children, they make vulnerable others susceptible to infection. It's just not worth the risk.