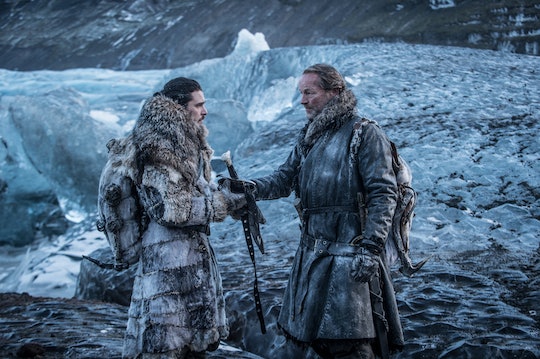 On Game of Thrones the details can be incredibly important, with small and seemingly innocuous moments indicating some major twists down the line. Who could have guessed in the pilot episode that Daenerys' love of super hot baths would foreshadow her stepping into a blazing inferno? Because of moments like that, fans are primed to seize small details as signs of things to come. But sometimes scenes that seem significant are really the opposite. In "Beyond the Wall," there was a moment where Jon Snow's sword Longclaw appeared to blink, but in a recent interview with Insider, the Longclaw eye theory on Game of Thrones was debunked by one of the show's directors, Alan Taylor.

In the episode, Jon had been dunked under the frozen-over surface of a lake up north while trying to escape the Night King's army. When he burst out of the water and reached for his Valyrian steel sword, it seemed like something strange happened. The wolf pommel on the tip of Longclaw's hilt appeared to open its eye. Had the sword become sentient? Did this mean something about Jon's destiny? Was it a metaphor for his rebirth under the ice? Fans went wild trying to figure it out.

But it looks like there was nothing to figure out. The moment wasn't actually intended to symbolize anything, nor was it deliberate. When asked about it in the Insider interview, Taylor said, "That is so funny, somebody else mentioned that to me and I haven't got a clue what they're talking about. So either this sword is magic and it's doing stuff on its own or something happened. [...] I can say that there was no intention for that to be the case."

Interviewer Kim Renfro speculated that perhaps some frost had settled on the wolf's face and was washed away when Jon splashed ashore, creating the illusion that its eye had opened. Taylor agreed that that was possible, especially because frost had been a concern during shooting. They had wanted to show how cold it was by having water freeze so fast it was almost instantaneous, resulting in a brief time cut that may have inadvertently made it look like Longclaw blinked.

There are times when the fandom's attention to detail can result in them uncovering something long before its intended reveal time, but that's not always the case. Sometimes a blinking wolf sword is just a trick of the light.