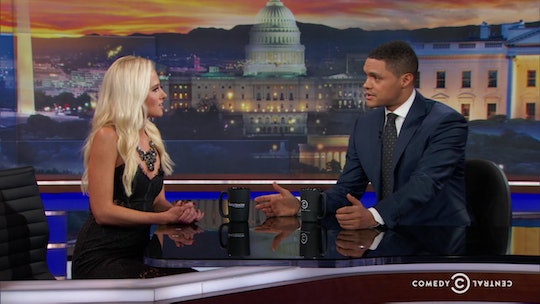 The 10 Best Moments From Trevor Noah's Interview With Tomi Lahren

If you've organized your Facebook feed into a nice, safe, liberal bubble, as so many have done in the past year or so, you may not have heard of Tomi Lahren before. As an ultra-conservative commentator for The Blaze, Glenn Beck's multi-platform network, 24-year-old Lahren's viewership primarily comes from Facebook. Think of her as a millennial Ann Coulter. So who better to take her down a peg than the millennial Jon Stewart? On Wednesday's episode of The Daily Show, Trevor Noah interviewed Tomi Lahren, and it was spectacular.

Noah has had his eye on Lahren for a while, and in a brief Daily Show segment in September, he introduced his viewers to her by airing a clip from her show, Tomi, during which she railed against Grey's Anatomy star for daring to mention race in his BET Awards acceptance speech. Noah praised Lahren as being "crazy-talented" due to "her amazing ability to take almost any topic and turn it into fire" before presenting a supercut of the commentator shouting a string of offensive words and phrases attacking transgender people, Native Americans, feminists, and Hillary Clinton, just to name a few. Why she agreed to sit down with Noah, I'll never understand, but the results are pure gold. If you don't have time to watch the full 26-minute interview, here were the best moments:

When He Schooled Her On Women's Issues

On the subject of "P*ssygate," Lahren acknowledged that she found President-elect Donald Trump's infamous comments "inappropriate," but that it didn't impact her taxes, immigration or, national security. Noah then pointed out that "it may impact the way women are perceived and treated in our country. It may impact the way women are looked at in a country where already you're dealing with a lot of issues–" Lahren interruped, "You mean like Saudi Arabia, which Hillary Clinton took money from?" Noah, a South African man, then patiently explained to Lahren, an American woman, what it's like to be a woman in America. "You don't need to go far when you're in a country where, every single day, women are being beaten and raped. You're going far when you have issues in your own country, and when a president says things like that ... I would assume that you would at least be able to see that."

This is the first and probably last time somebody managed to zing someone else using the word "beholden," but it happened, and it was tight. Lahren, defending Trump's "outsider" appeal, said, "You've got someone at the head that says, I'm not gonna take any B.S., I'm not beholden to anyone in D.C." Noah smoothly interjected, "Because he's beholden to people in India and Russia and China. But, carry on."

When She Didn't Buy Into Labels

Asked if she considered herself a conservative, Lahren said she did, with a caveat. "I mean, I'm a millennial, so I don't really like labels, but yes, I'm conservative in thought." Noah had to take a moment to wrap his head around that. "Sorry, my brain..." he began. "You just gave a label to say you don't like labels, but anyway, um..."

When He Called Out Her Hypocrisy

Explaining her issues with the Black Lives Matter movement, Lahren frequently brought up protests devolving into looting and rioting, something that Noah pointed out is not exclusive to Black Lives Matter, but an unfortunate consequence of all types of protests. He repeatedly tried to get her to understand the the actions of a few do not speak for the many. "How are you labeling out a few and condemning the actions of an entire group?" he asked Lehman. "You're the same person who argued on your show that just because Donald Trump has supporters from the KKK, doesn't mean he's in the KKK." Unfortunately, she couldn't seem to grasp the similarity.

Noah gave Lahren a chance to ingratiate herself to his fans, and it did not go well. When asked what she wishes people understood about her, Lahren said, "It doesn't make me a bad person, it doesn't make me a racist, to point out – I mean, I've never used racial slurs to address people, I've never looked down on someone because of their skin color. To me, true diversity is true diversity of thought, not true diversity of color. I don’t see color." Noah replied, "You don't see color? So what do you do at a traffic light?"

What White Nonsense Is This?

Lahren frequently refers to Black Lives Matter as "the new KKK," a ridiculous statement not just because the KKK still exists, as Noah explained to her, but because it minimizes the KKK's actions. Lahren counters with a claim that she's seen Black Lives Matter protesters holding signs that say "Fry 'em like bacon" and "F the police." "When that now becomes the narrative, and you're starting to loot, burn, and riot... What did the KKK do?" It's such an insane thing to say, it didn't even register with Noah initially, and he has to interrupt himself to ask her, "Did you say 'What did the KKK do?' Wow. wow." Noah was apparently too baffled to follow up.

"What Is The Right Way?"

Lahren has a huge problem with San Francisco 49ers player Colin Kaepernick taking a knee during the national anthem as a means of peaceful protest. "I think that he went about it the wrong way," she told Noah. Noah spent a healthy chunk of time asking her repeatedly what the "right way" is, since black people are repeatedly criticized no matter how they choose to protest. He had to redirect her multiple times from her tangents about the American flag and the national anthem, and her complaint that women didn't get the right to vote until after black men. "I feel like I'm a woman and I'm marginalized in some way," she told Noah. "So then, how do you protest?" he asked her. "I don't protest because I'm not a victim," she snapped. She then continued, amid boos from the audience, "I choose not to victimize myself, I choose not to make myself a victim. That's the difference." We never did get to learn the "right way."

Noah brought up immigration, which Lahren immediately spun towards terrorists and "illegals." Then she asked Noah, an actual legal immigrant, "What do you say to a legal immigrant ... and they see someone cutting in front of them and getting a pass?" After explaining that there's no actual line, he told her the most American thing I've ever heard: "You say to them, welcome to America, the greatest country in the world, where anyone can come from anywhere, can come here and achieve what they achieve if they set their dreams to it." When she tried to argue, he reiterated, "That's what you say. 'Welcome to America.' There's some who did it one way, and there's some who did it another way."

The One Thing They Agreed On

OK, that was sweet and all, but The Daily Show is a comedy program, so let's end it on a joke, as Noah did. Lahren described how she originally supported Florida Sen. Marco Rubio for the Republican nomination before eventually coming around to Trump: "It got closer to the campaign, and I started seeing some of the things he was saying, and I started seeing the effect he was having on people, and the things he was saying that were touching people–" "He was touching people," Noah agreed. "He really was."