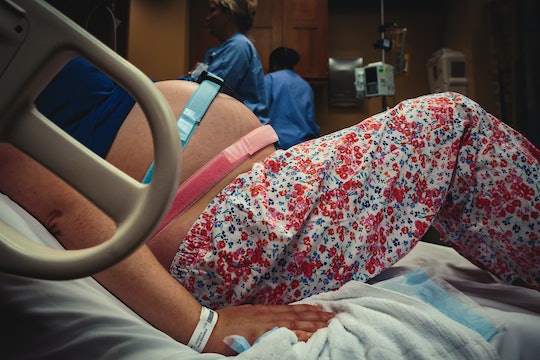 The Most Common Labor Complications Now Vs. 1970 Are Honestly Mind-Blowing

Healthcare is one field that’s expected to constantly change; that’s part of why it’s called “practicing” medicine. No one ever truly knows everything about the human body, so things are subject to switch up, including how the healthcare field approaches birth. In order to better track and understand this change, let’s take a look at the 10 most common labor complications now and compare them to what birthing was like a generation ago in 1970.

The main causes of injury from childbirth according to Medical News Today are:

Conversations around maternal health have luckily picked up, including within pop culture. In it's 14th season, Grey's Anatomy tackled the question of maternal mortality, when Pediatric Surgeon Arizona Robbins began a project addressing the cause of maternal mortality in the United States, after losing a patient.

As Robbins' quest showed, complications can occur at any point during the labor process, with consequences affecting both mother and child. In March 2016, Medical News Today reported the following 10 common labor complications:

For seven of the three complications listed, Medical News Today reported that C-sections are common solutions. This may not seem like an issue, given how normalized the procedure has become, but remember that this is still a surgery; it will bear all the associated complications. In 2015, Stat News reported that women in the United States were giving birth by Cesarean section more than necessary. Numbers have risen dramatically over the past decades, from 5 percent in 1970 to 20 percent in 1996.

In the past, practitioners relied on something known as "Twilight Sleep" — it was administration of drugs to provide pain relief, but also erase the memory of birth altogether. It's not hard to imagine how Twilight Sleep may have hindered our understanding of birth today, because mothers were unable to advocate for themselves (and family members were just starting to be allowed in the delivery room during the 1970s), or even remember what happened to them.

Because of the drugs used, women lost their inhibitions and had no conscious awareness of what was happening to them. Many were restrained on their beds, put into straitjackets, blinded with towels, and more, during the procedure. Twilight Sleep continued to be used up into the early 1970s, with the beginning of the natural birth movement.

Birthing practices have also looked different throughout history, based on other factors like race and socioeconomic status. Doulas, women who help other women through pregnancy and labor, began to see a steady increase during the 1970s — particularly working with white women; however, that wasn't their point of origin.

In 2017, Doula Trainings International published an article celebrating the history of Black midwifery in the United States. Black midwives acted in multiple capacities; they not only assisted with births, but they were caretakers and offered spiritual guidance. The article states:

Due to racism and sexism, many of the histories, accomplishments and legacies of black women’s contributions to birth work has been forgotten. Much of American midwifery history focuses on white women, which erases and silences black midwives experiences and accomplishments. Black women being excluded from these histories does not erase the tremendous amount of work they have done for birth work. More opportunities for black midwives and birth workers need to be given to black women.

It's incredibly pressing now, given that a national study recently found Black women were three times more likely to die in childbirth than white women. For all the steps the healthcare field might be trying to take, it means nothing if Black mothers are not included within the fold of the protected.

Things have definitely changed since the 1970s, but it's not a simple matter of being better or worse. Twilight sleep might be less of a phenomena, but the husband stitch still exists. Overall, the United States has a long way to go in truly protecting mothers.