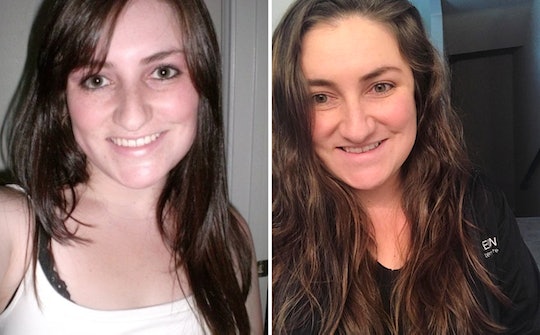 "How hard did aging hit you?" That's the question that has been filling all of my social media feeds for the past couple of weeks. It's a part of the 10-year-challenge, a social media game that has everyone posting side-by-side comparison photos of themselves from today and 10 years ago.

Usually, sharing old photos on the Internet is fun. I love it when I open up Facebook and the top of my newsfeed is an image of my now 4-year-old when he was a squishy new baby. A few weeks ago, I Kondo-ed the hell out of my closet and then turned my Instagram story into a virtual scrapbook of old photos I found: me at my 13th birthday party; in high school smiling beside my cute first boyfriend; standing on the Great Wall of China that summer in my early 20s when I went to Beijing. But the #10YearChallenge isn’t really asking us to reminisce or to get real about the myriad ways that aging has changed us. Instead, the challenge seems to be encouraging people to share their most attractive comparison photos to prove that, for them, growing up really means glowing up. As a busy and utterly exhausted mom of two, I’m sorry, but I just can't prove that.

These are my #10YearChallenge photos:

On the left, we have one of my earliest MySpace profile photos. I was a 21-year-old college junior who ran three miles a day and slept a full eight hours every night. When I took off my bra, my boobs stayed where they were instead of drooping to the bottom of my rib cage, and I had never heard the words "night serum" or "retinol."

In the photo on the right, I am a 31-year-old mom of a preschooler and a first grader. I work full-time as a freelance writer, and usually get about six hours of sleep on a good day. I am at least 60 pounds heavier than I was in the photo on the left because no, I never lost the "baby weight" from having my first kid (who is now 7 years old). My stomach and breasts are streaked with stretch marks. I'm getting sun spots on my cheeks. I rarely have time for makeup, and long, wiry silver hairs are starting to creep into my flowing brown locks.

I'm not ashamed of the way I look, but in all of the physical ways that count to society, nothing about 2019 me is "better" than it was in 2009. And looking "better" — or at least looking basically the same as before — is definitely the point of this challenge. On nearly every photo that gets shared, there's a dozen comments squealing, "OMG, you haven't aged a bit," or, "I think you look even more beautiful now!" And that's because almost everyone is purposely sharing the most ageless photo of themselves that they can find.

Even celebrities have gotten in on the action. Check out Jessica Biel.

Gabrielle Union threw it back 20 years, and she still looks fierce as hell.

If you legitimately look better than you did in 2009, that's awesome. You rock on with your hot self. But after seeing dozens of flawless comparison photos in my timelines for the past few weeks, I can't help but think that this challenge is really just another way of promoting the idea that there is something shameful about looking like you've aged.

Youth and beauty are not the same things as happiness, fulfillment, or success.

But that's not reality for a lot of people, and it's certainly not reality for me. As a mom and a normal, non-celebrity woman in her 30s, I can't hide the fact that my face and my body have changed. I have laugh lines, stretch marks, tummy rolls, and errant chin hairs, and they're only going to get worse as time goes on. In fact, I hope they get worse, because that will mean that I've lived long enough to have a full life and to watch my babies grow up.

A lot of people might look at my "now" photo compared to the version of me from 2009 and see a woman who's been "hit by aging" or "let herself go." But, so what? Youth and beauty are not the same things as happiness, fulfillment, or success, and they were never going to stick around anyway.

In 2019, I look exactly like the tired 31-year-old woman that I am, and my selfies will never be as cute as they used to be. But I'm also more successful, a better parent, a better partner, and a better friend, and I think most people could probably say the same about themselves. In the past ten years, we've all grown in ways that are way more important than how we look in a before-and-after photo, and I think the real #10YearChallenge is realizing there's no shame in proudly wearing physical proof that the last decade has happened.