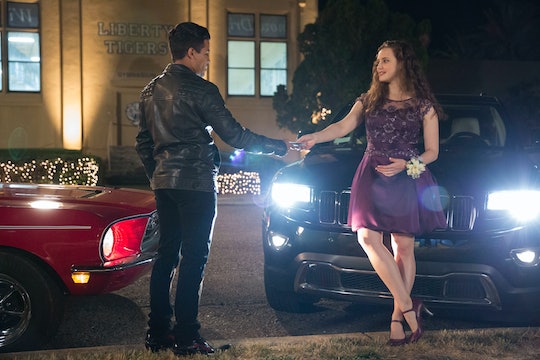 The '13 Reasons Why' Soundtrack Is Addictive

(Warning: this post contains spoilers from Episode 13.) 13 Reasons Why is a heart-wrenching show that raises the important question of why Hannah Baker decided to end her life. The mystery is what keeps viewers watching, but the 13 Reasons Why soundtrack is just as addictive. Throughout the entirety of the series, and typically at the end of each episode, there's a song that perfectly aligns with what happened throughout the hour or how a character is feeling in that final moment.

At the end of Episode 2, for example, viewers first got a taste of the amazing soundtrack when the episode ended with "Run Boy Run" by Woodkid. The song fit perfectly for the moment when Clay and Tony pass each other in the street, as Clay rides away from Hannah's house and Tony drives towards it. Similarly, the use of "Into The Black" by Chromatics at the end of Episode 3, perfectly aligns with Alex's clear anguish over his actions and him falling into the pool, seemingly not wanting to resurface.

One of the more moving songs is "The Night We Met" by American indie folk and rock band Lord Huron. The song plays during Episode 5 when Clay and Hannah share a dance, their first really romantic moment in the series. The song becomes Clay and Hannah's song, in a way, as they both are given tapes of the track from Tony so they can always remember the special moment together.

"The Great Longing" by LUH is also a fittingly timed tune that closes out Episode 6. After Marcus was the worst date ever to Hannah, the song effectively captures her want to just find a good guy that will treat her right and to have a love like her parents have.

Another notable song is "The Killing Moon" by Roman Remains, which comes in at the end of Episode 12. The dark song comes at the penultimate moment of the series when Hannah's at the point in her tapes when she's decided to end her life and the people on the tapes in the present day are all preparing for the lawsuit that may reveal all their secrets. The song is very appropriate for the moment and will give you chills.

Unsurprisingly, Selena Gomez, who executively produced the show, also has a song on the show. In the final episode she covers the '80s song "Only You," by the duo Yazoo, which played while Hannah left Mr. Porter's office after her final attempt to reach out to someone for help. Unfortunately, Gomez's cover of the song hasn't actually been released, but you can hear the original version on Spotify or listen to it here.

Finally, there's "See A Little Light" by Bob Mould, which closes out the series. The late '80s song somehow helps to end the series with both a sense of hope and also dread.