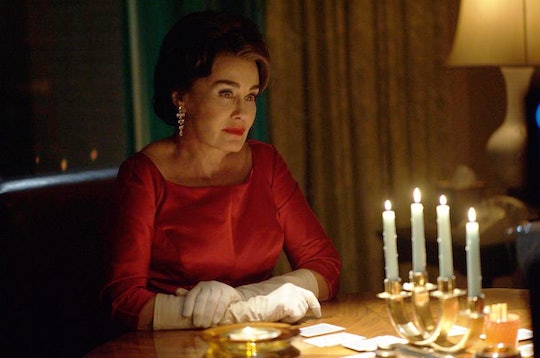 The Oscars Pay Tribute To Joan Crawford's Career On 'Feud'

Going into FX's highly anticipated series Feud: Bette and Joan, I expected to find myself siding with one actress over the other. Would I be Team Bette or Team Joan, but you know what? I found myself constantly rooting for and sympathizing with both of these women. Did they have their faults? Absolutely. But their story was not as cut and dry as two female costars in a petty, jealous, gossip-fueled war. And that fact was made all the more evident during the Feud season finale, which featured Joan Crawford's 1978 Oscars In Memoriam.

Well, I call it her In Memoriam, but the truth is that she shared the tribute with countless other Hollywood stars who died that past year, very similiar to what we all see showcased at many award ceremonies these days. Everyone gathered around to watch to reel, even Bette Davis herself with her eyes glued to the screen, waiting for her former costar's face to appear. And it did, but then just like that, it was over and done with. All of those years Crawford had dedicated to the industry, summed up in the blink of an eye. But how close did this on-screen In Memoriam come to the actual one that showcased this iconic actress, you may ask? Pretty darn close, believe it or not.

Just like in Feud, you can hear (and see) Sammy Davis, Jr. and Marvin Hamlisch perform "Come Light The Candles" as the list of fallen stars scroll by on the huge screen on stage. Near the end, the real Joan Crawford can be seen for a few moments before the video moves on to others, but it's pretty much an exact replica of what Feud portrays. In fact, if you swapped out Jessica Lange's face with Crawford's, you'd swear it was the real footage.

Knowing Crawford, she probably would've been disappointed that a bigger deal wasn't made out of her death, and in all fairness, she more than earned the right to think so. But it was an interesting choice to watch Davis watch the reel. These two actresses were never able to become the friends they could've been all along, but there was still a respect there that could sensed in spite of all the drama that came before it. Hollywood may have torn them apart, but it connected them in a way neither of them ever truly realized.