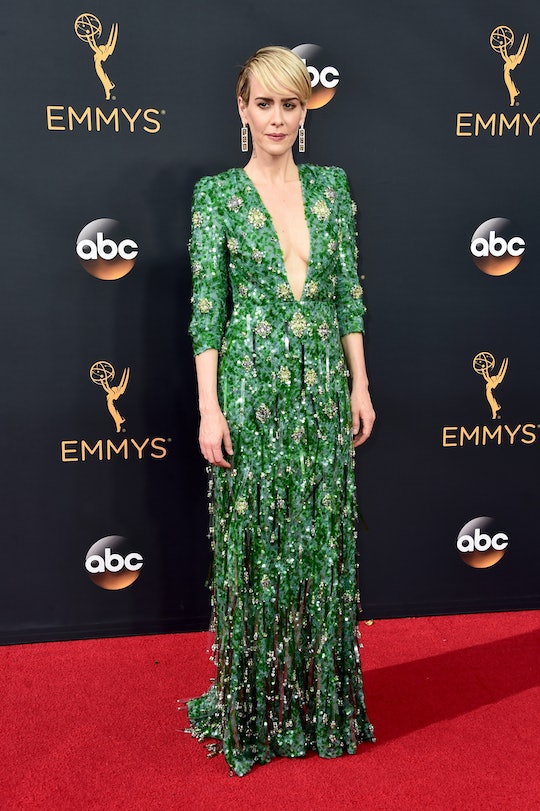 As expected, Jimmy Kimmel's opening at Sunday night's Emmys was perfectly packed with Game of Thrones references and 2016 election jabs, but fans at home are also being incredibly vocal on Twitter about the host's comments on this year's hit FX series The People V. O.J. Simpson: American Crime Story. The funniest 2016 Emmys O.J. Simpson jokes of the evening have already begun flowing in, with Marcia Clark, Cuba Gooding Jr., and Sarah Paulson being mentioned during the show's opening monologue.

Paulson, who is nominated in the Outstanding Lead Actress in a Limited Series or Movie category for her portrayal of the 1995 O.J. Simpson murder case head prosecutor, brought Clark as her guest to the show, which alone earned its own one-liner from Kimmel ("I'd like to acknowledge the winner of tonight's plus-one contest."), and the host continued to prod the duo in the night's opening minutes. As a nod to the not guilty verdict of the notorious case, during his monologue Kimmel announced to the crowd that Clark was accompanying Paulson to the evening's event before mentioning to the prosecutor that, "This must be very weird for you. Are you rooting for O.J. to win this time?"

The quips to Clark over the not guilty verdict didn't end there, with Kimmel later noting that "Everybody knows, if you want to win, sit next to Marcia Clark."

The host also used his monologue as a chance to praise Gooding Jr. for his starring role in the series as O.J. Simpson, for which he is nominated tonight in the Outstanding Lead Actor in a Limited Series or Movie category, with his remarks earning a completely meme-worthy response from the actor:

However, even though any jokes were made in good fun, viewers also took to social media to condemn any humor at a victim's expense, no matter how long ago the case may have occurred:

The series was nominated in 22 categories during this years awards, narrowly missing the title of most-nominated series, which this year went to Game of Thrones, which received a total of 23 nominations.