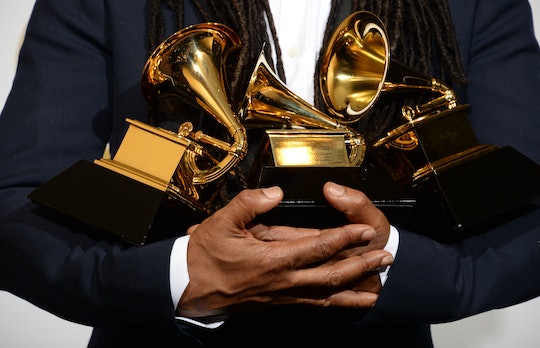 The 2017 Grammy Nominations Are In & Here Are The Contenders

Although the majority of people have their minds on the holidays, others have another event on their mind — the Grammys. For those in the music industry, the Grammy Awards are even bigger than Christmas. And as soon as the nominations are announced, singer, songwriters, and producers alike begin counting down to the big night. The 2017 Grammy nominations were announced Tuesday morning during a press conference. Pop star and winner of the 2016 Grammy for Best New Artist Meghan Trainer presented the nominations for the main categories, while the others were shared via the internet.

The Grammys honor the best in music, with categories that acknowledge work both in front of and behind the mic. The 59th Annual Grammys will air Sunday, Feb. 12, 2017 on CBS. James Corden will take on the hosting duties, and I'm e praying to the award show gods that the late-night host's famous "Carpool Karaoke" segment make an appearance.

But this year's Grammys will have a different look to it — at least, the nominee list will. This June, the Recording Academy announced via the official Grammy website that streaming-only recordings are now eligible for Grammy nominations. Additionally, the Recording Academy has added two new Blues categories: Best Traditional Blues Album and Best Contemporary Blues Album. These changes will allow for more artists to be recognized and honored in an industry that can be very narrow.

So who has the chance to take home the golden gramophone? Here is the full list of the 2017 Grammy nominees:

Best Arrangement, Instrumental or A Cappella

Producer Of The Year, Non-Classical

Producer Of The Year, Classical