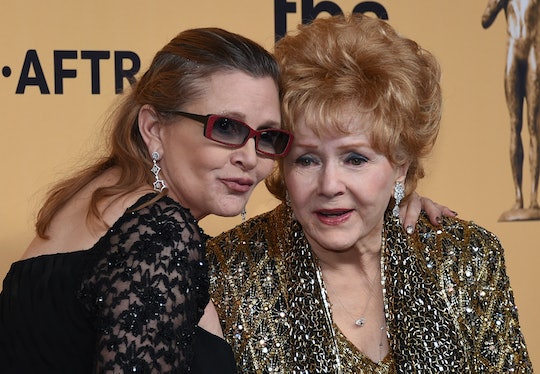 The 2017 SAG Awards In Memoriam Was Heartbreaking

While it's true that the purpose of any given award show is meant to celebrate the many wonderful works and performances that have graced our screens (both big and small) throughout the past year. However, sometimes it's important to pause on the festivities and honor those in the entertainment industry who are no longer with us. So it was only a matter of time before the 2017 SAG Awards In Memoriam portion of the evening commenced, and as you can probably imagine, things got pretty emotional.

It would be an understatement to say that the entertainment lost a lot of powerhouse players throughout the course of 2016. And nothing makes that fact more prominent than a good old-fashioned in memoriam reel. From the Everybody Loves Raymond star Doris Roberts to even the most recent death of the iconic legend Mary Tyler Moore, the video of all the people we have lost over the past year was downright heartbreaking to say the least. And, of course, the video closed out with two of the most tragic deaths of the year: that of Carrie Fisher and her mother Debbie Reynold, both of whom died within a day of each other. And before you get too upset over the fact that David Bowie and Alan Rickman weren't included in the list, don't forget that they were part of last year's reel since their passings happened so early into 2016.

Granted, watching an in memoriam video is never not sad. While many of us never actually knew any of these performers in real life, apart from what we've seen of them on-screen, their portrayals and characters have made them feel like family to many. So when they leave this world, we're all there to collective mourn and celebrate the life they led. And as you could see from the collection of talent shown, their contributions were vast. And while they may be gone from this world, their works won't soon be forgotten.

Now if you'll excuse me, there's a box of tissues and a gallon of mint chocolate chip ice cream with my name on it. BRB.