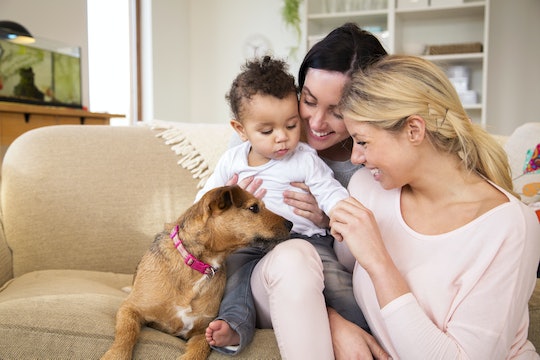 The 2020 Census Will Ask About Same-Sex Marriage, & It's A Huge Step Forward For Families

The United States is now two years away from taking its next census, the mandatory, every-10-years questionnaire that collects data about American households. And while it might not seem all that exciting, it's actually really important: census data is used to determine things like federal funding allocation, as well as the number of seats each state should have in the House of Representatives. The difficulty? The outcome ultimately depends on the specific questions asked, and up until now, the questions haven't been very useful. But the 2020 census will ask about same-sex marriage explicitly for the first time ever, according to Pew Research, and in addition to being a much-needed step towards ensuring accurate statistical information about LGBTQ Americans, it's also a way of finally recognizing and validating same-sex marriage rights, and the needs of same-sex couples and their children.

It's hard to believe that there is still such a lack of accurate data about same-sex couples and families in the United States — it's been nearly three years, after all, since same-same marriage finally became legal nationwide, and even that felt hugely overdue. Technically, the United States Census Bureau has been publishing data about same-sex households as far back as the 2000 census, according to Five Thirty-Eight, but it hasn't ever been all that accurate: in the 2010 census, for example, it's thought that more than one-quarter of the number of couples categorized as being in same-sex relationships actually weren't, and the demographic information collected also didn't actually match up with state-level marriage records.

In other words? If you're in a same-sex marriage in the U.S., the government doesn't actually have accurate information about who you are, where you live, or what your needs may be. Raising kids with your same-sex spouse? In 2014, the Williams Institute at the UCLA School of Law estimated that between 2 million and 3.7 million children in the United States have an LGBTQ parent, but that may not be reflected accurately in census data if your relationship status was incorrectly categorized. And given that the census determines how social programs are funded, the lack of information means that the needs of same-sex families can't be properly represented. As former Census Bureau director Kenneth Prewitt explained to LifeHacker in 2017,

[The] data gathered in the decadal census, determines, for example, whether new schools are opened or current schools are shut down. Transportation grants and education grants, among others, are distributed proportionally ... If you’re trying to govern a society and respond to citizen needs, you’ve got to know who they are, what their conditions are, and where they are.

That's true regardless of sexual orientation, but given the struggles same-sex couples have faced to even have their marriage rights acknowledged, the need to be included accurately definitely matters. As openly-gay former San Francisco Supervisor Scott Wiener explained to TIME in May 2016,

For decades our struggle has been to stop being invisible. When you don’t have data about a community, at times it can seem like the community doesn’t exist.

As much as that might be an important step for same-sex families though, there is still a long way to go before all LGBTQ Americans are properly counted by the census. That's because the 2020 census still won't include sexual orientation or gender identity questions for each individual, according to NPR, which means that single or transgender people — as well as any other couples that don't specifically fit into either the "same-sex" or "opposite-sex" partner boxes — will be left out.

Despite the importance of the data it collects, the United States Census certainly seems to lag behind when it comes to reflecting the reality of American families and households today. And while it's encouraging to know that the information from the 2020 Census will at least provide a more accurate depiction of same-sex couples than ever before, it seems pretty clear that there is a long way to go before LGBTQ Americans can expect the United States Census to actually include them the way it should.