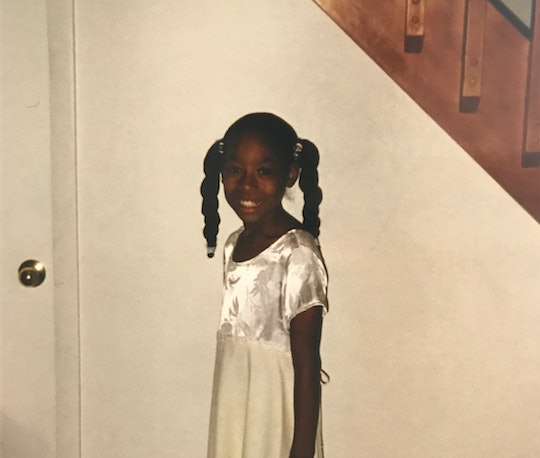 I Needed #MeToo As A Kid. I'll Make Sure My Child Has It Now.

It's been two years since the #MeToo hashtag went viral. While the important work of #MeToo, pioneered by Tarana Burke, had been going on for years, it was this viral moment that brought about a cultural reckoning. But on the second anniversary of the #MeToo movement, I can't help but think about how much I needed it when I was a child. And now, as an adult and a mom, I'm filled with a sense of urgency to protect my own child and educate others about the importance of advocating for child abuse prevention in their own cities.

It was a beautiful summer day at the lake. When I wasn’t showing off my new bathing suit to my friends or testing the limits of my lungs by holding my breath underwater for as long as I possibly I could, I was building sandcastles on the shore and practicing my butterfly stroke a few yards from where my family swam. My birthday was days before that trip to the lake and I was so excited to finally turn 10. I had hit the double digits. I had made it. And I was more excited than ever to be celebrating with friends and family at my favorite state park.

I still remember the taste of lake water and sunscreen that slowly dripped into my mouth from the bottom of my goggles each time I’d rush to the surface after holding my breath. The clear, calm water looked beautiful as I swam underwater looking for shells. I didn’t even notice how far away from my family I’d swam until I made my way to the surface and could barely find their brown faces in the never-ending sea of white people. We were in a small Michigan town with a population less than 600 people. As one of two Black families for many miles, we stood out.

As I started to swim back to my family I felt a tap on my shoulder, followed by someone tugging on my bathing suit bottoms — part of a Limited Too tankini I begged my grandmother for as a birthday gift. The suit was expensive but she surprised me with the vibrant, floral suit just days before we went on the trip to the lake.

“How old are you? Like, 12?” a strange man said, before signaling for his friends to join him and circle me in the water. Then, one by one, they took turns quickly squeezing my chest. One of them even started to reach into my bathing suit bottoms. And even though I know the encounter couldn’t have lasted more than a minute, it felt like hours. I was confused, uncomfortable, and didn’t know what to do or say so I did the first thing that came to mind: splash my assailants with water and swim away from them as fast as I could.

It wasn’t the first time I was harassed as a kid, but that didn’t prepare me for the emotions that accompanied the moment. Prior to the incident at the lake, there were two other instances of sexual assault that led to my eventual fear of men. The details of the violence matter less than the fact that I didn’t even realize I was being attacked. I didn’t have the language to explain how I felt and I didn’t have a close enough relationship to an adult to feel comfortable sharing my experiences. So I carried the shame, guilt, and pain with me for years, assuming that I was the one to blame.

As a mom, one of the most important things I want to teach my children are the concepts of consent, bodily autonomy, and boundaries.

It had to be my fault. Why would it happen to me multiple times if it wasn’t my fault? I had to be doing something to cause multiple men to turn my body into their playground. It wasn’t until I started therapy in my early 20s, after being followed and sexually assaulted on a Brooklyn-bound A train, that I realized the problem wasn’t me.

Now, in the era of #MeToo and #BelieveSurvivors, there are new essays, articles, and reports about rape culture and what it’s like to heal as a survivor of sexual assault released every day. People of all gender identities are sharing their stories and being transparent about what they’re going through as they navigate a world that’s historically silenced victims.

What’s missing from the conversation are stories about the people who are still suffering in silence because they don’t have the language to explain what they’re going through: children. Young people who are trying to grow up and stay out of trouble, but are struggling to figure out who they are because their lives and development were impacted by sexual violence. Kids who are forced to make pinky promises that swear them to secrecy with abusive family members. Kids who don’t have access to comprehensive, developmentally-appropriate sex education so they don’t even know that the person who is touching them is violating them.

Children like that little girl in the Limited Too bathing suit, desperately swimming to safety.

I know that my past experiences involving childhood sexual abuse impacted who I am today. Therapists have told me. But more than anything, those experiences impacted how I parent. As a mom, one of the most important things I want to teach my children are the concepts of consent, bodily autonomy, and boundaries. My children will never be forced to hug or kiss anyone if they don’t want. Not for a photo, not during holiday events with family, not for any reason at all. Their body, their choice. And there are some people I’ll never allow to see or meet my child, either.

But even my most resolute parenting plans can't shield me from that fear that comes with knowing that no matter how hard you try to protect yourself and your children, there are factors beyond your control that can impact your life. Rape culture continues to suffocate us. For three million women nationwide, their first "sexual experience" was rape, according to a report from NPR. One in five women, and one in 71 men, will be a victim of rape at some point in their life, according to the National Sexual Violence Resource Center. The president of the United States is an accused rapist. A member of the Supreme Court stands accused of sexual assault. Every 92 seconds, an American is sexually assaulted, according to Rape, Abuse, & Incest National Network (RAINN), and every nine minutes, that victim is a child.

In the era of #MeToo, we have to do all that we can to protect children and there are so many first steps to take. Learn about the unique needs of children who experience trauma. Help your children build confidence and make supportive connections. Support policies, legislation, and programs committed to preventing child abuse. Advocate for children and families in your community by reaching out to local representatives. Educate yourself about ways to support organizations fighting to prevent child sexual abuse.

We can’t just #BelieveSurvivors, we have to condemn rapists and make sure that our children are safe from abusers. I’m not suggesting that we silence the narratives of adults, but I am advocating for more justice for survivors who are children.

Because I needed #MeToo when I was a child. So did many of my friends. So do the kids today who are suffering in silence.

If you or someone you know has been sexually assaulted, you can call the National Sexual Assault Telephone Hotline at 800-656-HOPE (4673) or visit online.rainn.org.