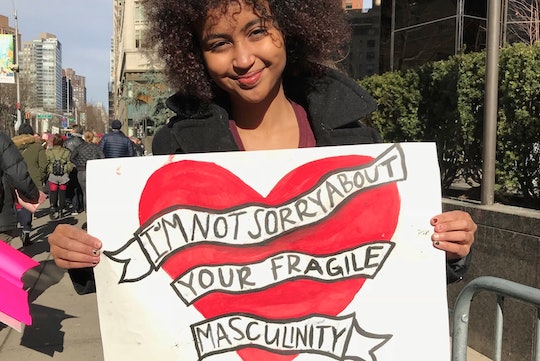 Last year, the pink hats marched against the threat of what Trump promised — the symbolism of his win — this year it was what he and Congress actually have done and what they plan to do still. And this year, the attendees of the Women's March came armed with a plan. This year, as last year, critics vastly underestimated the power of the Women’s March, the million-odd attendees of whom showed that the movement was not only more ingrained but savvier one year on. “We not only need to show up to march but we need to take action when we go back home,” Julia, a 39-year-old mother of two who marched in San Francisco, Calif., tells me, “Always forward motions.”

Trump, for all the damage he has caused, has given women an incredible political education.

A year on, the newness had worn off but the resolve hadn't — if anything, it was more pointed. At the New York march, Trump’s likeness and a selection of his most offensive comments were of course ridiculed on posters and effigies. But then there were women and men hoisting placards about voters rights, women’s health issues, health insurance, gun safety, DACA, immigrants rights and representation, #MeToo, LGBQT rights, and many more issues than I can enumerate here. Stop anyone to ask them why they marched, and you would get a small lesson in their given political cause.

“Women of color are still not treated equally in medical situations by doctors and nurses just because of the color of their their skin,” Najaad, a 20-year-old college student, tells me by Central Park. “Women need more access to healthcare not less. It is a serious problem that women have to drive two or three hours for a gynecological visit. These are essential health needs, not luxuries.”

I have seen women in my network and at the march display this fluency in policy and the workings of political power. The turnout may have been lower in 2018, but the commitment to the cause has a far greater reach.

Trump, for all the damage he has caused, has given women an incredible political education. From the despair of November 8, 2016, to the elation of January 20, 2017, the first leap occurred.

At this time in 2017, Trump was focused on inflating the crowd-counts for his sparsely attended matinee inauguration and downplaying the attendance for what turned out to be reportedly the single-biggest one-day protest in U.S. history by the Women’s March Alliance — a shock to the system in the sheer numbers who brought their families and friends to stand against Trump’s vision. This year, Trump tried to spin the march as an endorsement of his presidency.

What he and other conservative commentators are missing is the progress that has already been made — the transformation of the Women’s March from a one-off to a political tool that has brought millions of women (and men) up to speed on the state of politics and taught them how to act. It is a leap that I witnessed on the ground in New York as countless protestors marched and spoke out for their rights and the rights of others.

The quick planning of the Women’s March for January 21, 2017, in Washington, D.C. led to a historic turnout, eclipsing the magnitude of the presidential inauguration several times over. Women, men, and children traveled from near and far to participate. I didn’t make it myself, but I’ll never forget reading about women hopping charter buses or flying together just to be there. It was inspiring for me because I had spent a lot of time in college protesting various environmental causes only to be mostly ignored by both the public and government. Now, not only were people upset about something political, but they were willing to take action en masse — this was monumental.

Stop anyone to ask them why they marched, and you would get a small lesson in their given political cause.

A friend from New York, Kate, told me that bringing her daughter to the march in D.C. last year was essential; to be surrounded by national monuments where protesters had gathered in previous decades for all kinds of rights felt historic itself, she said. And there was a deep feeling of power and camaraderie among the crowds in every location I heard about. They felt like they belonged to a movement that was not only worthwhile but necessary. It felt as if everyone who showed up was telling Trump that he and his proposed policies weren’t welcome. This year, more so, there was the feeling that people knew who they were, and what they needed to do.

Several women I spoke with this year were astounded at the lack of healthcare options for rural women and women of color, expressing shock that care could be so poor in a rich, modern country and disbelief over cuts to Medicare, Medicaid, and Planned Parenthood. Women’s healthcare was a common catchcry. Najaad, the college student, says she has experienced racism at GP’s offices during regular checkups.

Kate, a 37-year-old mother who marched in Los Angeles, Calif., voiced the same concerns for maternal health for women of color and in the rural areas of the country, telling me by phone, “The GOP doesn’t value the lives of women or the future generations of this country with the way they cut funding for healthcare, particularly maternal care.”

Last year, the pink hats marched against the threat of what Trump promised — the symbolism of his win — this year it was what he and Congress actually have done and what they plan to do still.

In many respects, the GOP’s assault on women’s healthcare and human rights has galvanized people around these issues where they might have simply taken them for granted. Ann, a 56-year-old from Newburgh, N.Y., spent many years unable to afford any health insurance while running her own business, and, until “Obamacare,” relied entirely on Planned Parenthood for every health need. Ursula’s, a 66-year-old from Warwick, N.Y., tells me that her niece used Planned Parenthood all through college because "it was the only affordable option for her healthcare.”

For many people it’s their first year of truly paying attention to the workings of government, actually reading the news, actually debating policy, and expressing their beliefs as active citizens in our democratic republic.

The groundswell in women running for office and getting involved in the political machine was also reflected on the ground. Maura, a 41-year-old lawyer and mother outside of Philadelphia, believes “Trump has not shown any interest in governing at all. He is very self-serving in all of his actions.”

Women have stepped into this void. Julia tells me from San Francisco, “We need to vote, call, show up to community meetings, and it depends on where you’re spending your money. Your dollars are part of your vote. I haven’t gone to Home Depot since the CEO came out and supported Trump during the campaign over a year ago, and that’s just one small way to take action. People can take small actions to make a difference.”

I even heard a woman yell out, “We are not hashtags, we deserve respect!”

Trump may have been the focal point of the march, but people gathered to protest every objectionable bill and decree his administration and Congress had pushed through.

The same friend who went to Washington, D.C., last year, said that this year it seemed more like a parade than a march because the electricity had died off a little. She wondered if we’d be doing this for the next 30 years, like the Pride Parade but for women’s issues. This moment felt less like a call to march than our obligation to make sure our voices are heard for the sake of ourselves and our children.

A good number of women yelled out to each other, “I can’t believe we still have to do this!” and everyone around laughed because we all feel we’re really working for this democracy now.

Some in the march said that civil action had worn on them; they were tired of arguing with family members and online with strangers, calling representatives federally and at the state and local levels, writing letters, protesting, and just keeping up with the endless news cycle of “What’s he done now?” But tired or not, more people have felt the need to take action and not just complain than in previous years of recent history.

Everyone I spoke to at the march expressed a disgust at the lack of civility and will to negotiate in government. The need for a unifying leader, who isn’t “presidenting” by tweeting, seems urgent. It is a difficult time, but this collective exhaustion is a positive sign: for many people it’s their first year of truly paying attention to the workings of government, actually reading the news, actually debating policy, and expressing their beliefs as active citizens in our democratic republic.

We’ve burned a half a tank of gas but there’s still enough to get us through to the end because we’ve all started to pace ourselves. We will continue as long as we have to and we will not stop until there are rights, respect, and decency for all people.

Over the past year, I have decided to take action. I regularly call government representatives and have gotten more involved in my town, as well as made an effort to talk to people who disagree with me on key issues and listen to their opinions with an open mind so we can understand each other. In particular, I have spent the last year looking for anyone who does anything decent and worthy. I then write that person or group a thank you note, make a call, or send an email. I’ve extended it to my entire life and not just politics. In the early months of 2017, I wore myself out being angry.

Out of necessity, I switched focus to what good there is, and make an extra effort every day to be polite and kind to whomever I meet — my small way of combating hate and intolerance. Not everyone I know agrees with me, and so we fight our battles in our own way. My takeaway from this year is that we’ve burned a half a tank of gas but there’s still enough to get us through to the end because we’ve all started to pace ourselves. We will continue as long as we have to and we will not stop until there are rights, respect, and decency for all people.

As I watched a section of about 1,000 people make their way down Central Park West, shouting “We will not be silenced!” and “Let’s go 2020!” I thought about what Julia had told me: Always forward motions.