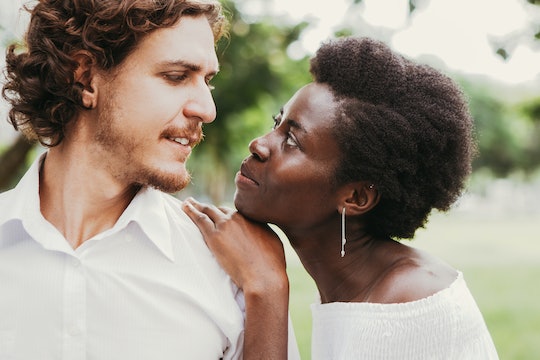 The 3 Colors That Attract People To You In Person Vs. In Photos

Dating can be really difficult. It's not always something that makes sense or something where you can predict the outcome. It can be messy and stressful as well as fun and exciting, so if there's something that could potentially affect the way people see you and how they're attracted to you, you might be interested in knowing just what that is, right? The three colors that attract people to you in person vs. in photos can have a real affect on how people perceive you. While you should still wear the kinds of things that you feel most comfortable wearing, rather than going above and beyond to do something you're not comfortable with to potentially make yourself appear more attractive, these three colors — as well as some of the factors that affect how they're perceived — have been shown to boost attractiveness.

In a survey conducted by a UK online T-shirt sales company, the majority of respondents said that they find people wearing black to be more attractive, more confident, and smarter than those wearing other colors. Black was found to be the best choice in a first date outfit, as well as a good choice for a job interview. While you might not always feel the most confident in such a harsh hue, for those that do, it can have a real effect on how others see them.

Like the color black, the color red has also been found to affect how attractive you're perceived to be by others. A 2008 study conducted by researchers at the University of Rochester and published in the Journal of Personality and Social Psychology found that men were more attracted to women who were wearing the color red. The researchers argued that this attraction was due to both societal and biological factors. In previous research, nonhuman male primates were also attracted to the color red. Additionally, a 2010 study conducted by the same University of Rochester researchers as well as some of their colleagues found that women also find men wearing red to be more attractive and more "sexually desirable." Given the strong cultural connection of the color red with romance, sex, and passion, it's perhaps not that surprising to hear that it can affect the way both men and women perceive one another.

The color purple, too, can have implications when it comes to attraction. Medical Daily reported that a survey conducted in the UK by detergent maker Ariel found that 36 percent of women participating in the survey responded that they'd accept the offer of a date from a man wearing purple. That was the highest response of any color surveyed. Black came in second. It's hard to say for certain if purple really does have an impact on how attractive you're perceived to be or not — or if it has more of an effect on how trustworthy or likable people find them — but, when you're dealing with dating, upping the possibility that your date will say yes is sometimes what matters most.

If you're concerned with how a color might photograph, which many people are in the age of dating apps and selfies, there are more factors at play than just the color of the clothing itself. Some of it has to do with just how those colors can show up on film or digitally. A professional photographer told Jezebel writer Sadie Stein that solid clothing tends to photograph better than busy, bold patterns. And, yes, red and dark colors (like black), photograph well also. These colors can do well in photos as well as in person because they're simpler, so to speak. There are limits on how colors can be expressed digitally, which can, as you likely know from experience, distort colors that otherwise might look great in person, as photographer Mike Vorrasi tells Romper. Not only that, but, as Fast Company reported, a Curalate analysis found that, when talking about Instagram posts, photos that were brightly lit performed 24 percent better than darker, shadier images. However, the same report found that photos with a lot of blue in them did about 24 percent better than photos consisting mostly of reds and oranges. So, like with anything else, it's important to take all of this regarding color and attraction with a grain of salt.

Again, though these colors and other factors might have some sort of impact on how attractive you're perceived by others, ultimately, it's still most important that you feel comfortable and confident — regardless of what it is that you're wearing.