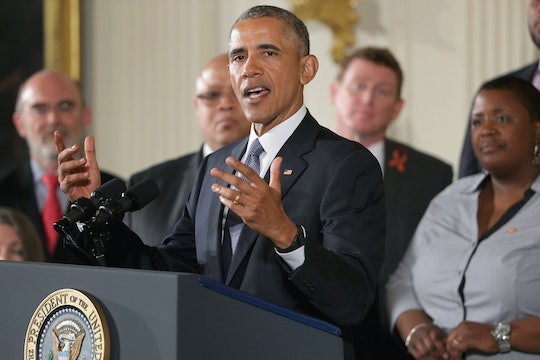 On Tuesday, Obama announced, tearfully at times, that he will enact new executive actions aimed at decreasing gun violence in the United States. As news broke Monday about his plans to bypass Congress on this contentious issue, anticipation for him to weigh in was at an all-time high. And one huge takeaway from the speech is that he is committed to putting proactive measures in place that will prevent future massacres — and achieving this means putting talking points and partisanship aside for good. Obama's best quotes from his gun violence speech announcing his executive action show who the real victims of the U.S.' poor gun laws are.

At the East Room of the White House, President Obama explained, in front of an audience full of people personally affected by gun violence, how there was once a consensus involving gun control. However, up until recently, he claimed it has become a “polarized, partisan” debate which has led people to becoming “numb” to mass shootings and “thinking that this is normal,” according to the Huffington Post. Lamenting this fact, Obama vehemently rejected the idea that common sense gun laws — specifically expansive background checks — couldn’t prevent a massacre, according to the New York Times.

A turning point came when Obama recounted how he felt during 2002’s Sandy Hook Massacre, which, like in past speeches, made him emotional. “Every time I think about those kids, it gets me mad. And by the way, it happens on the streets of Chicago every day,” he said with tears in his eyes. But if one thing is clear from his speech, it is that his patience for foot dragging on gun control has worn out — and he’s ready to make tangible moves to decrease an unprecedented rate of gun violence in the US. Obama's give best quotes from his speech on gun violence tragically revealed just why gun rights activists are not the victims when it comes to gun control reform.

Though mainly focused on gun control, Tuesday’s speech ran the gamut. Obama began the speech pretty light with a few jokes. But things got serious fast when he talked about former Arizona Sen. Gabby Giffords, who in 2011 was shot along with 18 others at a Tucson supermarket during a public event. Endorsing universal background checks, Obama preemptively addressed criticisms about their effectiveness, according to a transcript from the Washington Post:

We know we can't stop every act of violence, every act of evil in the world. But maybe we could try to stop one act of evil, one act of violence. Some of you may recall at the same time that Sandy Hook happened, a disturbed person in China took a knife and tried to kill with a knife a bunch of children in China, but most of them survived because he didn't have access to a powerful weapon.

From there, Obama explained how not only is U.S. gun violence unsurpassed by the rest of the "developed world," but little legislation has been passed to address it. Though the cause of gun-related mortalities range from suicide to gang shootouts — something needs to be to be done. And, in a statement probably geared to his detractors, Obama made it clear that he’s not looking for any political “points” by taking these steps, according to the Post:

And in case anyone forgot, Obama reminded the American people that he knows a thing or two about the Constitution — as a Constitutional lawyer and all. People accept that certain aspects of the First Amendment are limited to protect us all (people can't yell "fire" in a crowded theater where there's no fire). Analogously, Obama suggested that people think about the Second Amendment in the same light.

But he also pointed out that he wouldn’t consider common sense background checks as infringing on the right to bear arms. Obama went on to have quite a few less-than-complimentary words for gun rights activists, whom he believed — with their "slippery slope" talking points — are doing more harm than good, according to the Post:

When it comes to an inherently deadly weapon, nobody argues that guns are potentially deadly. Weapons that kill tens of thousands of Americans every year. Congress actually voted to make it harder for public health experts to conduct research into gun violence. Made it harder to collect data and facts and develop strategies to reduce gun violence. Even after San Bernardino, they refused to make it harder for terror suspects, who can't get on a plane, to buy semiautomatic weapons. That's not right. That can't be right. So the gun lobby may be holding Congress hostage right now but they can't hold America hostage. We do not have to accept that carnage is the price of freedom.

Driving the point home, the president brought up the issue of rights, generally. While the gun rights lobby is fear-mongering and convincing Americans that their rights are being taken away, Obama said they forget about the 30,000 people who lose their right to life thanks to guns, according to the Post:

Our right to peaceful assembly, that right was robbed from moviegoers in Aurora and Lafayette. Our inalienable right to life, and liberty and the pursuit of happiness, those rights were stripped from college kids in Blacksburg and Santa Barbara, and from high schoolers in Columbine, and from first graders in Newtown. First graders. And from every family who never imagined that their loved one would be taken from our lives by a bullet from a gun.

Drawing to a close, Obama brought up the heroism of 15-year-old Zaevion Dobson, a football player who died protecting three girls during a shootout. According to WHNT News, the Tennessee teen was shot and killed when he was caught in the crossfire between two rival gangs. While Obama said decreasing gun violence won’t happen overnight, cases like Dobson’s should compel us to act. Right. Now. Obama said, according to the Post:

Obama's words reminded people of something they often forget as Americans. In this country, Americans are afforded a number of rights that they might not receive elsewhere. Because there are so many of them, they often conflict. So, lawmakers make decisions to limit certain rights to protect the more important rights of other people.

The Second Amendment, which was originally intended to protect people from government tyranny, should be curtailed to protect people from being killed — from having their fundamental right to life taken from them. And that's something gun rights activists are forgetting — they are not the victims of gun control laws. The victims are those who were killed — accidentally or intentionally — by guns, and they deserve justice.