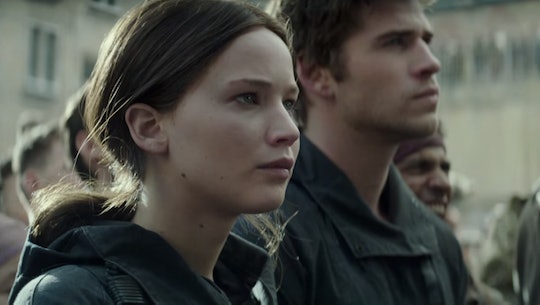 Since its premiere on Nov. 20, The Hunger Games: Mockingjay - Part 2 has earned $103.4 million in box office sales — the lowest opening night yield yet for the movie series based on the wildly popular young adult dystopian novels by Suzanne Collins. While Mockingjay Part 2 has received mixed reviews from critics, there's no denying that the final installment of The Hunger Games films doles out relentless emotional punch after punch to the gut.

Mockingjay Part 2 clips along at swift pace, dropping the audience right where Part 1 left off, with a badly-injured protagonist Katniss Everdeen (played by the always-amazing Jennifer Lawrence) recovering from a brutal attack by her brainwashed best friend/"it's complicated" pseudo-boyfriend, Peeta Mellark (played by a very yummy Josh Hutcherson).

As with every installment of The Hunger Games films, there is no handholding for audience members who haven't read the books; that said, you don't have to have read the books to feel the absolutely devastating emotional wreckage the main characters must wade through to reach the credits. Out of the 2 hours and 17 minutes of running time, here are the five tearjerker moments from Mockingjay Part 2 that will make your mascara run.

For much of Catching Fire (both the book and film), we knew only the vaguest of details about Finnick's mysterious one true love, Annie. When they finally reunite in Mockingjay Part 1, it's an emotional moment. Their wedding scene in Part 2 is an unusually joyous moment in the otherwise bleak film - that is, until you get to this scene:

Book-readers know that this is the last time Katniss will ever hug her beloved little sister, Prim, again (but not necessarily the last time she sees her alive). And even if you haven't read the book, the moment their hug shifts from sisterly comraderie to a sort of desperate clinging, you just know something terrible is in store for Prim.

"You're a painter. You're a baker. You like to sleep with the windows open. You never take sugar in your tea. And you always double-knot your shoelaces."

Oh man. Probably one of fans' favorite quotes from the Mockingjay book, Lawrence delivers this line with such a painful, beautiful delivery that you can't help but try and fight the tears.

"Our lives were never ours."

Having just barely escaped from the tunnels beneath the Capitol, Katniss and what's left of their team hide out in the city. As Pollux, the mute Avox, weeps for the death of his brother Castor, Katniss is wracked with grief over the death Finnick O'Dair at the hands (and teeth) of the Mutts. Peeta, in one of his rare moments of clarity, explains that their deaths are not in vain so long as Katniss completes her mission to kill President Snow and free the people of Panem from oppression. It's one of Hutcherson's best moments in the movie.

Gifts from The Capitol

Prim's death scene - need we say more? Yes, yes we do: because you also see hundreds of the Capitol's children killed too. This scene is brutal.

That Scene With Buttercup

Just when you weren't emotionally wrecked enough, Lawrence delivers one of the most raw moments of the film. Having returned to the Victors' Village in District 12, Katniss is left to herself - and her demons. Buttercup, Prim's awful cat, shows up looking for its master. Completely destroyed by everything she's faced since her first Hunger Games, Katniss screams at the cat while finally releasing a torrent of emotions.

And yet, despite all this, Katniss scoops up the cat and cradles it, finally letting the grief over her sister's death wash over her. You will ugly cry just as hard as Katniss does - I guarantee it.

Grab your tissues and keep them close when you go see Mockingjay Part 2 - you're definitely going to need them.