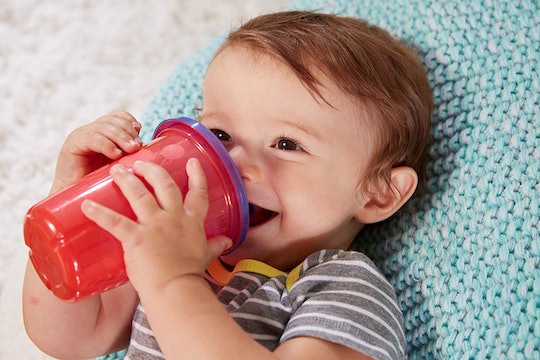 7 Sippy Cups That Real Parents Swear Are The Most Convenient

It can be daunting to think about transitioning your baby from breast- or bottle-feeding to drinking from a cup. After all, your baby may feel attached to their current way of feeding. Luckily, the best sippy cups help to make the switch a little easier, since they’re designed to teach your baby how to drink from a cup while minimizing messes (as long as your baby doesn’t figure out how to take the lid off, that is).

Advice varies about when to switch your baby to sippy cups, but experts usually say that somewhere between the ages of 6 and 12 months is typical. The American Academy of Pediatrics (AAP) advises that when you do make the switch, you should be sure to use the sippy cup for all liquids, milk included. Remember, though, that sippy cups are meant to be a transition tool; once your baby can handle the sippy cup, the AAP recommends switching to an open cup. The AAP also notes that bottles should be phased out completely between 12 and 24 months of age.

Most sippy cups are made from plastic because it is a lightweight, durable, and budget-friendly material. However, there are other options. Stainless steel is a durable choice that can keep liquids cool, but it tends to be heavier than plastic. Some people prefer glass sippy cups because of concerns about chemicals in plastic. The downsides of glass is that it’s heavy and can break, so it might be a better choice for older sippy cup users.

With all of this in mind, I scoured Amazon to find the seven best sippy cups that reviewers say their little ones love.