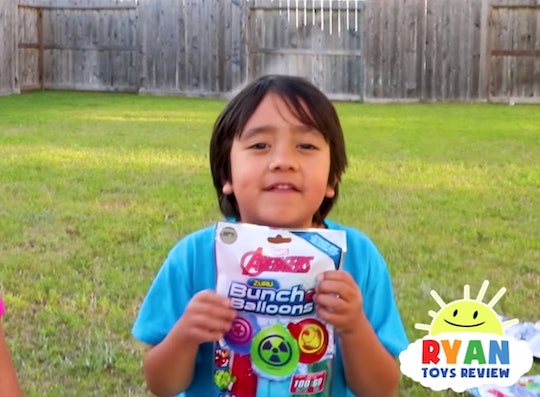 It can be hard being a kid. Navigating home and school, friends, parents, and siblings, and figuring out what to do with your millions of dollars. OK, that last one is really just a problem for one kid, the 7-year-old behind YouTube’s Ryan ToysReview who made an astonishing amount of money in 2018.

The pint-sized mogul raked in $22 million dollars in 2018, according to Forbes, which released its list of the top 10 YouTube earners on Monday, Dec. 3. Ryan topped the list, just edging out prankster Jake Paul at $21.5 million and the team of Dude Perfect with $20 million, according to Forbes.

Ryan ToysReview, if you’re not familiar, is just what it sounds like. Videos are filmed of Ryan unboxing and playing with toys and uploaded to YouTube. They can range from just a few minutes long to over 40 minutes, and the most watched — of Ryan playing with oversized surprise eggs — has garnered 1.6 billion views.

That’s just a fraction of the 26 billion views his videos have earned since he and his parents launched the channel in March 2015, according to Forbes. It all started because Ryan was a fan of watching toy review videos himself, according to Scary Mommy, so when he was 4, he asked his parents if he could make one.

Now, he has 17 million subscribers watching the videos he posts, on average, once a day.

When asked why kids like watching him, he spoke with the authority and confidence of a celebrity which, by all rights, he is. “Because I’m entertaining and I’m funny,” he told NBC News, grinning at the camera with the missing-tooth smile that reminds viewers he’s just a kid.

That doesn’t stop retailers from turning to him for inspiration and to draw in customers. Walmart, for instance, launched a partnership with Ryan and his family to sell Ryan’s World-branded toys in 2,500 stores, according to the Times of India. The paper noted that it’s a calculated business move for Ryan and his family, since the U.S. toy market is underserved currently after Toys "R" Us closed its stores in 2018.

Though Ryan is definitely the star of the show, his family has become an attraction in their own right, despite their anonymity. They haven’t released their last name or location, according to Scary Mommy, presumably for safety. But they don’t shy away from the camera either. His father and mother regularly appear in the videos playing with him, or can be heard talking to him from behind the camera. They even launched a companion channel called Ryan’s Family Review, which features content from family celebrations, shopping, and everyday life. Emma and Kate, Ryan’s toddler sisters, show up in these videos regularly, too.

Could the family be grooming them as the next iteration of YouTube stars? It wouldn’t be unheard of. The man who came in second on Forbes list is the younger brother of Logan Paul, a longtime YouTube favorite until he fell from grace after a scandal in 2017.

But none of that competition probably even registers for YouTube’s most lucrative “gamer.” He’s just got too much play to focus on.