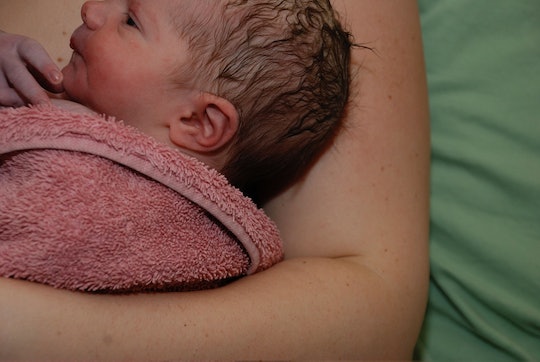 The 8 Emotional Stages Of Attempting A VBAC

When I found myself unexpectedly pregnant in January 2011, a few things immediately went flying through my head and spouting out of my mouth:

And shortly after all that, I said — not in a panic, but in a complete state of calm — “I somehow get the sense that this kid is a boy and he’s going to be a c-section.”

I was right on both counts.

It wasn’t that I wanted a c-section. It was just one of the few instances of weird, prescient intuition that I’ve ever had… and since I don’t believe in weird, prescient intuition, I still did everything reasonable thing to minimize my likelihood of needing one, including, not least of which, finding a provider with a lower-than-average c-section rate. New York’s c-section rate was 34.7%; my OB boasted approximately 20%, lower if you factored out high-risk pregnancies. I minimized my time in the hospital, laboring 12 of 18 hours at home, where my only pain management was making sounds that I can only describe as being like those of an orgasming woodpecker. But once I got to the hospital, despite contractions every minute for another six hours, I had only dilated five and a half of the necessary ten centimeters needed to begin pushing. My water had been broken since 3:00 a.m., and my “sunny side up” baby was in distress. So when my OB looked at me and said that she would advise a c-section, I trusted her and thus, my prophecy came to pass.

Emergency c-sections can be scary, painful, and traumatic. So many women feeling coerced into them by myopic and uncaring doctors. I was extremely fortunate in feeling none of those things. I felt my doctor worked with me and listened to my questions and concerns. I joked with the anesthesiologists during the surgery itself. When my son was born, I felt that euphoric rush of hormones women talk about when they describe their natural births. My recovery went blissfully well, thanks to good luck and some awesome painkillers. It was a beautiful, happy birth.

The only time my skeptical self is ever tempted to believe in fate, it’s usually when I think of how my two children came into the world. My son arrived exactly as he was “supposed to,” and so was my daughter, who was born via VBAC — vaginal birth after cesarean — 33 months later. Just as I “knew” my son's birth would be a c-section, I “knew” my daughter's would be different. It wasn’t out of a sense to reclaim my body or my birth experience or heal from a traumatic c-section birth (though it can and is absolutely that for many women). It simply made the most sense for me. the American College of Gynecology and Obstetrics states that VBACs are a “safe and appropriate choice for most women” and between 60-80% of women who attempt one will be successful. Thus began my attempt to procure one of them fancy, new-fangled vaginal deliveries.

But anyone who has tried this for herself can tell you there’s a lot more that goes along with this decision that simply deciding one day “you know, when I go to the hospital, I’m just going to tell everyone that I’m going to push it out of my vagina.” Much, much more, with lots of accompanying emotions.