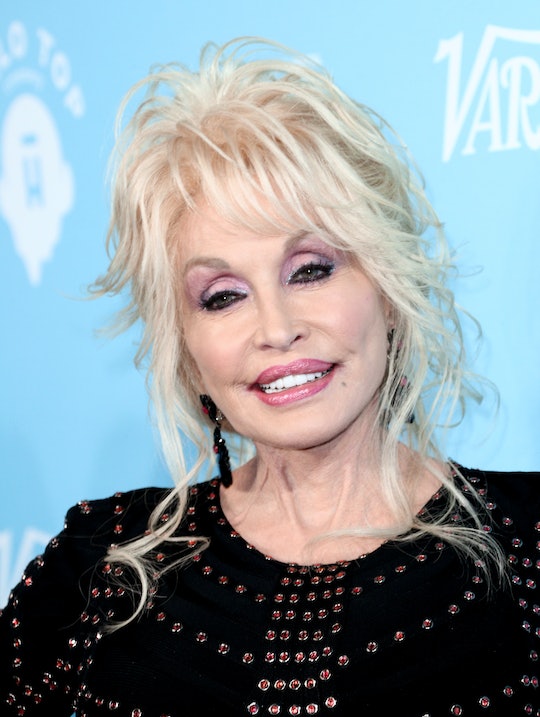 In case you thought that Laura Dern, Reese Witherspoon, and Nicole Kidman were the only trio of iconic women at the 2017 Emmys, think again. Lily Tomlin, Jane Fonda, and Dolly Parton showed up to change the game — and they did not mess around. The 9 to 5 cast called Trump a "sexist egotistical lying hypocritical bigot" at the Emmys, because why the heck not.

If you're not familiar with the classic 1980 film 9 to 5, you really should be. Seriously, stop what you're doing and go watch it. But in the interest of time, I'll give you the rundown so that you can understand the serious shade that these three icons just threw at Donald J. Trump. The film stars Tomlin, Fonda, and Parton as three women who all work under a man who is a sexist egotistical lying hypocritical bigot. The boss in question continuously sexually harasses Parton's character Doralee, and starts an untrue rumor that the two of them are having an affair, which causes tension for her in the office. He passes over Tomlin's character, Violet, for a promotion because of sexist office policies. And he belittles and berates Fonda's character, Judy, who is new to the workplace. Any of this sound familiar?

The film takes off after the women — drunk and a little high — begin fantasizing about killing their godawful boss, and then wind up accidentally poisoning and kidnapping him. Eventually, the three have to take over the business for themselves. The plot was radical and timely in 1980. And somewhat bizarrely, it is still just as timely in 2017.

It is clear that this remark was a dig at Trump. Is there a phrase that more succinctly describes our current president? Trump's political career has been defined by his disgusting attitude towards women, his bigoted attitudes towards immigrants, people of color, and the LGBTQ community, his outrageous lies, and his infantile ego. It would be nice to believe that we've moved forward from the world that existed in 1980. But apparently we haven't gotten that far.

The reason that Fonda and Tomlin were on stage at the Emmys — aside from the obvious political implications of their movie 9 to 5 — is that they act together now on the Netflix series Gracie and Frankie, a show about two women who find out their husbands have been in a romantic relationship for the past 20 years. I have never seen the show, personally, but perhaps I should, considering my deep and abiding love for the first time these two actors worked together. As an aside, how absolutely gorgeous are these three?

This beautiful moment and shot at Donald Trump was hardly the first time someone made a Trump joke at the 2017 Emmy Awards. Stephen Colbert, the host of the occasion, has been making nonstop Trump jokes since he first decided to run for office. Colbert wasn't about to stop now that he's hosting the Emmy awards. In fact, he kicked off the night (after his song and dance routine) by saying, "The biggest star of the last year is Donald Trump,” adding, "We may not like it, but he’s the biggest star. And Alec Baldwin, obviously." Frankly, when a film from almost 40 years ago is more progressive than the president, we've got some thinking to do.