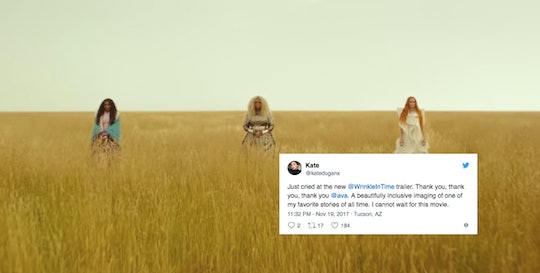 The ‘A Wrinkle In Time’ Trailer Is Here, & People Are Freaking Out Over How Beautiful It Is

Ava DuVernay's screen-adaptation of the beloved Madeleine L'Engle sci-fi novel, A Wrinkle In Time, already seemed like it would be pretty awesome. In addition to having a top-notch director dedicated to encouraging diversity in film, and a screenplay written by Jennifer Lee (of Frozen fame), it also boasted a pretty star-studded cast: Reese Witherspoon, Mindy Kaling, Chris Pine, Zach Galifianakis, and Oprah Winfrey all signed on for the project. Now, the Wrinkle In Time trailer is here, and it has definitely delivered on the hype, serving up what looks to be both both a whimsical and fantasy-filled tale, with a hearty dose of suspense and adventure thrown in for good measure.

The trailer, released Sunday, is a follow-up to July's Winfrey-narrated teaser trailer, and offers a more in-depth look at the film's gripping premise: the astrophysicist father (Pine) of young, bespectacled teen Meg Murry (played by actress Storm Reid) has mysteriously disappeared, and is actually being held captive by an evil force. Meg enlists her brother, Charles Wallace, and her classmate, Calvin O’Keefe, to help her save him, and together they work with three women, Mrs. Which, Mrs. Whatsit, and Mrs. Who, (Winfrey, Witherspoon, and Kaling), as they embark on their fantastical, mind-bending journey.

The clip has all the makings of a gorgeous other-worldly fantasy film, but in 2016, DuVernay told Vanity Fair that it was always important to her that the film also show a multicultural cast not often seen in a big-budget movie. While the original book has a predominantly-white cast of characters, Meg, for example, is a "mixed-race girl of African-American and Caucasian descent" in the film. And in July, DuVernay told Entertainment Weekly why it was important to her that the lead character be a young girl with brown skin. She said,

The first image [I had in my head] was to place a brown girl in that role of Meg, a girl traveling to different planets and encountering beings and situations that I’d never seen a girl of color in. All of those scenes struck my fancy, and then it was also something that [Disney VP of production] Tendo Nagenda said to me, which I’ll never forget. One of the things that really made me want to read it was when he said, ‘Ava, imagine what you would do with the worlds.’ Worlds! ‘Planets no one’s ever seen or heard of,’ he said. There aren’t any other black women who have been invited to imagine what other planets in the universe might look and feel like. I was interested in that and in a heroine that looked like the girls I grew up with.

DuVernay also took a similar perspective when it came time to cast the three magical women sent to guide the children. Revealing that Kaling was the first of the trio she actually cast, DuVernay explained,

My whole process with this film was, what if? With these women, I wondered, could we make them women of different ages, body types, races? Could we bring in culture, bring in history in their costumes? ... I wanted a black Mrs., a white Mrs., and a Mrs. that was not either, and Mindy was the first one that came to mind. I feel like we don’t talk about a lot of the other colors and cultures enough, and Mindy is so beautiful to me.

Unsurprisingly, the trailer has been a big hit on Twitter, where it seems like users are counting down the days until the film's release on March 9:

Unfortunately, fans still have a while to go before they can actually see the film in theaters, but it seems pretty safe to assume that it will be a huge hit. And judging by the reaction to the trailer, it looks like it will definitely be worth the wait.