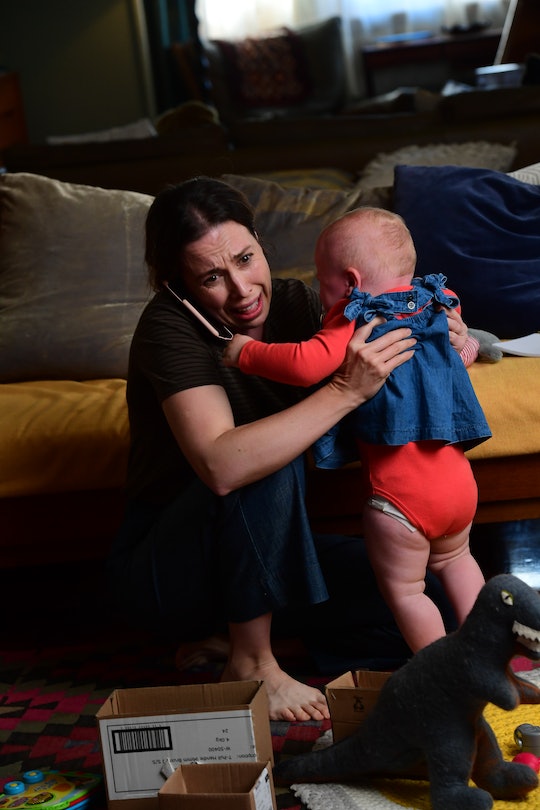 TV shows about new motherhood are having a renaissance. From Workin’ Moms to SMILF to I’m Sorry, there’s no shortage of content on the exhaustion and elation that accompany early parenthood. Like these comedies, Australia’s The Letdown, available to U.S. audiences on Netflix, follows Audrey (played by Alison Bell, who also writes for and produces the show) as she acclimates to motherhood surrounded by a group of equal parts judgmental and supportive peers. The second season of The Letdown, premiering on Netflix on July 31, comes with a twist: facing a surprise pregnancy at the end of season one, season two reveals (spoiler alert!) that Audrey had an abortion.

Just how common is it for TV moms to have abortions? Not that common. In our research, examining abortion stories on television over the last decade, we found that of 126 total plotlines in which a character gets an abortion, only 17 of those characters were mothers. That’s just 13 percent compared to real life, where the majority — 59% — of people who have abortions are parents (a fact that Audrey mentions in episode 2), according to the Guttmacher Institute.

In addition to being underrepresented, TV moms getting abortions are different than their real-life counterparts in other important ways: 14 of the 17 TV moms getting abortions we studied are white, while the majority of real abortion patients are people of color, according to the Guttmacher Institute. There are only two depictions of contemporary moms of color having abortions on television: Lena on The Fosters, who had a medically-indicated abortion, and Xiomara on Jane the Virgin. (In fact, Xiomara was also the second grandmother to get an abortion on TV! The last was the title character on Maude in 1972.)

Americans are generally surprised to discover that most abortion patients have at least one child at home, and that people choosing abortion have a full, personal understanding of pregnancy and childrearing, as well as pregnancy loss, ectopic pregnancy, and a slew of other common reproductive outcomes.

TV moms are also older than real abortion patients: they tend to be in their 30s or 40s, when most real-life abortion patients are in their 20s. They also seem to experience relatively few barriers to accessing abortion care. For example, none of the TV moms are shown figuring out how to find childcare so they can make their appointments, or figuring out how to come up with money for both the abortion and their child’s school supplies. This is drastically different than reality, where the average cost of an abortion is about $500. Both Medicaid and private insurance often withhold coverage of abortion, which leaves people scrambling to find that $500 out of pocket in addition to covering the costs of childcare, travel, lodging, and missed time at work, again, all figures from Guttmacher. These compounding additional costs can add $200 or more to the cost of the abortion, which is an astronomical amount when most people seeking abortions are already struggling to make ends meet.

These patterns of abortion portrayals and how they do and don’t line up with reality are important, because they can influence how audiences understand who gets abortions and why. One of the most frequently cited reasons real women give for seeking an abortion is the need to prioritize care for their existing children, along with interrelated concerns like finances and the ability to afford another child. When mothers are missing from our cultural narratives about abortion, this understanding gets lost completely.

Americans are generally surprised to discover that most abortion patients have at least one child at home, and that people choosing abortion have a full, personal understanding of pregnancy and childrearing, as well as pregnancy loss, ectopic pregnancy, and a slew of other common reproductive outcomes. The omission of stories about moms getting abortions furthers the idea that people who have abortions and people who parent are separate groups of people — as abortion provider Rachel Atkins pointed out 26 years ago, we know that they are the same people, at different points in their lives.

While Audrey and Verity’s relationship isn’t permanently improved by this conversation, this scene emphasizes that abortion is an experience that can create intimacy and understanding, instead of conflict.

The Letdown alternately reinforces and refutes these stereotypes in important ways. Demographically, Audrey fits in with most TV moms seeking abortions: she is a white woman in her 30s and faces no barriers to seeking an abortion (even though the show takes place in Australia, where abortion is still a criminal offense in some states and where 1 in 3 Australian women have difficulty affording one). Unlike all of the other shows depicting abortion on TV, Audrey’s abortion is a key component of the second season story arc (it’s discussed in four of the six episodes), and the show uses her experience as a touchstone for connection with other characters and as a cultural commentary on abortion.

Besides her husband, Jeremy, (played by Duncan Fellows,) and a sommelier, the first person Audrey discloses her abortion to, months later, is her mother, Verity (played by Sarah Peirse), who in turn tells Audrey about an abortion she had when Audrey was 6. Even though Audrey and Verity often clash over parenting styles, Audrey’s sense of relief at confiding in her mom is palpable: “I feel better just for telling you,” she confesses.

In our analysis, we found no other TV plotlines over the last 10 years in which a mother and daughter share their abortion experiences with each other. One recent film, 2014’s Obvious Child, follows a similarly a tense mother/daughter relationship that’s transformed, even momentarily, by both women disclosing their abortions to each other. Similarly, Audrey and Verity’s conversation about their abortions is a tender moment of emotional connection, where two moms get refreshingly real with each other about the sacrifices involved in raising another human being without losing yourself in the process. While Audrey and Verity’s relationship isn’t permanently improved by this conversation, this scene emphasizes that abortion is an experience that can create intimacy and understanding, instead of conflict.

Let’s hope more shows build on The Letdown’s work and let parenting characters share their full selves — abortions and all.

Throughout the season, Audrey has multiple opportunities to tell her mom group about her abortion, and each time she explicitly denies it or keeps it to herself. In the last episode, as they catch up during a rare night out without their children, Audrey blurts out, “I had an abortion.” Her friends rally to support her, with one mom even sharing that she’s had an abortion, too. Having a character disclose an abortion only to learn that a friend went through something similar is an emerging trend on TV; in recent episodes of Claws and The Bold Type, one character’s abortion disclosure leads to others, reinforcing the idea that sometimes sharing a secret can lead to a deeper bond instead of shame or judgement. It also highlights just how incredibly common abortion is: about one in four women will have an abortion before the age of 45, according to Guttmacher. Statistically, we all know and love people who’ve had abortions.

Portraying friends and partners supporting a character having an abortion isn’t necessarily new (just this year, we’ve seen it on Workin’ Moms, Sex Ed, and Shrill), yet showing multiple characters who’ve had abortions, especially characters who are mothers, provides an opportunity to showcase the normalcy of abortion and the fact that moms have abortions for many different reasons, all of which are OK.

As abortion becomes increasingly difficult to obtain in real life — U.S. states passed 58 anti-abortion laws in 2019 alone, and six states have only one clinic that provides abortion care — TV creators have the opportunity to elevate diverse abortion stories and provide a template for envisioning a future of compassionate, accessible abortion.

Let’s hope more shows build on The Letdown’s work and let parenting characters share their full selves — abortions and all.

More Like This
10 Of Julia Louis-Dreyfus' Best Quotes On Motherhood & Raising Her Sons
We Ranked The Best (& Worst) Games Our Kids Learned From 'Bluey' — You're Welcome
For Real Life!? More 'Bluey' Is Coming, But We'll Have To Hang Tight For Season 4
Mom On TikTok Asks Daughters Why They Want To Be Boys & Same, Girls, Same
What Parents Are Talking About — Delivered Straight To Your Inbox