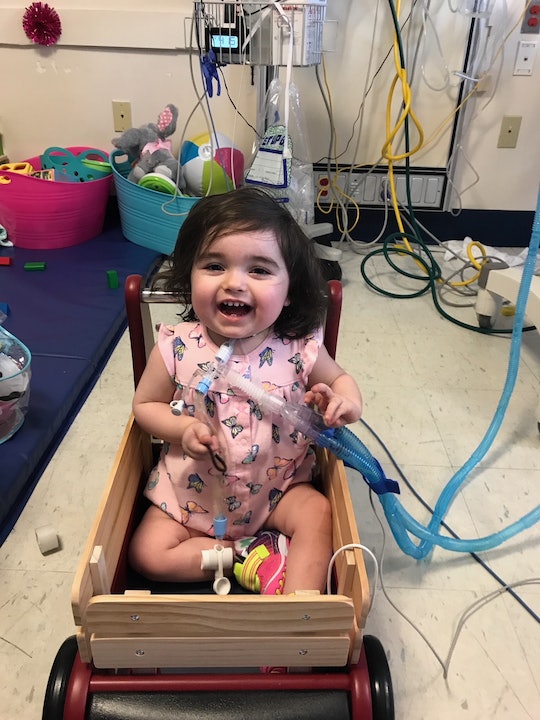 Under Trump, My Daughter’s Life-Threatening Disease Could Become A “Pre-Existing Condition”

As the Affordable Care Act (ACA) looks increasingly vulnerable to Republican attacks, the parents of 2-year-old Mae, a girl who has undergone a double lung transplant, speak to the threat the Trump Administration poses to families reliant on the ACA for healthcare.

Within the first hour of our daughter’s life, it was clear something was wrong. Her grunting was a sign she was having trouble breathing; she was gasping for air at 150 breaths per minute, instead of the slow and steady 20 to 40 breaths of a typical newborn.

The hospital staff rushed her to the neonatal intensive care unit, where she was quickly put on a vent to help her lungs work while the doctors and nurses ran a series of tests to figure out what was wrong.

This was the beginning of what became our daughter Mae’s 20-month hospital stay. She was born, we eventually learned, with an extremely rare genetic form of Childhood Interstitial Lung Disease (ChILD) known as ABCA3. She couldn’t breathe without a significant amount of support off the ventilator, and needed constant monitoring. The care she received in the hospital saved her life, and it wouldn’t have been possible without the Affordable Care Act.

Without the ACA, which prevents insurance companies from putting a lifetime cap on health benefits, Mae would have hit her $1 million limit at 3 months old, and our family would be bankrupt.

Our family is lucky. We have good private health insurance that got even better with the guarantees the ACA put in place. Mae also qualified for MassHealth, a Massachusetts health insurance program that combines Medicaid and CHIP, and that fills in the gap to cover any of Mae’s medical expense our private insurance did not. Without the ACA, which prevents insurance companies from putting a lifetime cap on health benefits, Mae would have hit her $1 million limit at 3 months old, and our family would be bankrupt.

When we first learned about Mae’s diagnosis, we held out hope that she would grow out of her disease and wouldn’t need a lung transplant,entailing a lifetime of medication and the possibility of rejection. But as time went on, it became clear that the only way to get our bright, happy, engaged baby free of the tubes that kept her alive yet trapped in the walls of a hospital room was to get her new lungs.

Three weeks after a successful double lung transplant when she was 20 months old, Mae pushed her little wagon out of the hospital and came home to her moms and big sister, Rosie, for the first time. We are beyond thrilled to have Mae home, and even the smallest thing feels special. We also know that her transplant makes her one of the 129 million Americans with pre-existing conditions and without the ACA, insurance companies could discriminate against her and choose not to cover her care or charge outrageously high rates for her care.

The long stay in the hospital and medical uncertainty made for a trying nearly two years, and Mae’s post-transplant medical care is still extensive. To have the burden of finding full and complete medical coverage for Mae lifted has been an enormous relief. Thanks to the ACA, we never had to doubt that she’d have coverage or that we could afford her care. That’s how it should be. Yet that peace of mind could be ripped away from us and from millions of Americans as Republicans revive their efforts to repeal the ACA and the Trump Administration continues its efforts to sabotage it.

This opens the way to deny coverage to people with pre-existing conditions like Mae.

Recently, President Trump’s Department of Justice refused to defend the ACA against a legal challenge that seeks to invalidate protections in the law that prevent insurance companies from discriminating against people with pre-existing conditions. Rather than choosing to protect the law of the land, this opens the way to deny coverage to people with pre-existing conditions like Mae, could eventually lead to the return of lifetime limits, and, at the very least, will see premiums and out-of-pocket costs skyrocket for many people covered by the ACA.

This comes on the heels of Republicans passing a $1.5 trillion tax bill that funnels money to corporations, billionaires, and millionaires who need it the least. If a nation’s greatness is measured by how it treats its weakest members, as the famous Ghandi quote goes, then Congressional leaders and the Trump Administration are taking America in the wrong direction.

Our family and millions of others can’t afford for our elected officials to turn back the clock on the progress we’ve made and return to the days when insurance companies could make up their own rules, leaving families out of options or facing bankruptcy.

Today, Mae is 2-years-old and full of life, with a bright future ahead. Who could want anything else for her, or for the millions of other children whose lives depend on access to affordable health care?