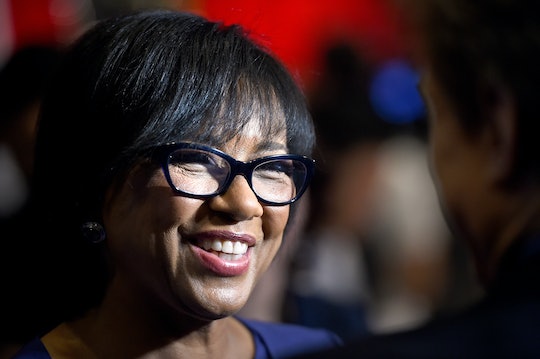 For the second year in a row, the Academy of Motion Picture Arts and Sciences has taken flack for not nominating a single black person for an Oscar. The internet, yet again, fired up the #OscarsSoWhite hashtag, calling attention to the lack of minority representation when it comes to actors who were nominated. On Tuesday, Academy President Cheryl Boone Isaacs addressed the lack of diversity in the Oscar nominations, saying that it leaves her “heartbroken and frustrated,” according to Us Weekly. Though plenty people have come and are continuing to come forward with ways to solve this problem.

Michael B. Jordan, Samuel Jackson, Straight Outta Compton, and Idris Elba are just a few diverse actors and works that were mentioned as being snubbed by the Academy this year. “African-Americans will be represented by host Chris Rock, but none will get to hoist the 8.5-pound statue of a naked man without genitals representing what’s great about the movies,” the New York Daily News pointed out.

Isaacs, the Academy’s president and an African American woman, said Tuesday that she was bothered by the composition of Oscar hopefuls. "I’d like to acknowledge the wonderful work of this year’s nominees," Isaacs wrote in statement obtained by Us Weekly. Though she didn’t cast aspersions on nominees or even the Academy, she did offer some ways the organization plans to address and combat this issue, according to Us Weekly:

While we celebrate their extraordinary achievements, I am both heartbroken and frustrated about the lack of inclusion. This is a difficult but important conversation, and it’s time for big changes. The Academy is taking dramatic steps to alter the makeup of our membership. In the coming days and weeks we will conduct a review of our membership recruitment in order to bring about much-needed diversity in our 2016 class and beyond.

However, some celebs are taking a hard-line approach in response to the nominations. A day before Isaacs’ statement, news broke that Spike Lee and Jada Pinkett Smith would boycott the event in protest, according to Vox. Though Lee received an honorary Oscar last November, he posted on Facebook that he is skipping the show:

How is it possible for the 2nd consecutive year all 20 contenders under the actor category are White? And let's not even get into the other branches. 40 White actors in two years and no flava at all. We Can't Act?! WTF!!

Lee also alluded to the Rooney Rule, which mandates NFL teams must interview minorities for senior coaching positions, as a comparable model that The Academy — and the industry at large — should incorporate to tackle diversity issues, according to his post:

Why can't Hollywood do the same? It's worth the effort or it will be the same old hi-jinks. I do hope in my children's lifetime things will change for the betterment of all Americans. A great diverse America.

Smith, whose husband Will Smith wasn’t nominated for his performance in Concussion, posted a video on Facebook Monday explaining why she is boycotting the Oscars:

Here's what I do know. Begging for acknowledgement, or even asking, diminishes dignity, and diminishes power, and we are a dignified people, and we are powerful, and let's not forget it.

In a series of tweets, Smith doubled down on those sentiments, and explained further why a boycott is necessary:

But how can this matter be solved? One potential solution gaining traction is diversifying the board that nominates actors and films. The Academy Board, which votes on who is considered for certain categories, is alarmingly whitewashed. The Los Angeles Times reported that in 2012 “Oscar voters are nearly 94 percent Caucasian and 77 percent male,” and that “blacks are about 2 percent of the academy, and Latinos are less than 2 percent.”

Further, The Times pointed out that the Board is a closed system. There are three ways to join the board: get an Oscar nomination, receive a recommendation from a current member, or get an endorsement from the membership committee or Academy staff. Knowing this, it makes it quite difficult for minorities to join the board while, in turn, influencing who gets nominated. So, hopefully, Isaacs’ changes make a difference.

Though changing the makeup of the Oscar Board is undoubtedly an audacious move, one of the more all-encompassing solutions some are suggesting involves diversifying lead roles in Hollywood, generally. The Chicago Tribune reported that African American Oscar winners have widely played stereotypical roles: Octavia Spencer won for best supporting actress in 2012, playing a maid in The Help; Mo’Nique Angela Hicks grabbed the same award in 2010 for playing an abusive mother in Precious; and 2002 best actress winner Halle Berry played a poor Southern woman in Monster Ball.

Even in recognition, it does matter how certain groups are represented — because when actors and actresses break the mold it makes it that much harder to receive acclaim. Lonnae O’Neal at the Tribune echoed this:

I cheered when Sylvester Stallone was nominated for best supporting actor in "Creed," but I was disappointed that director Ryan Coogler and star Michael B. Jordan were not. New black heroes are telling new black stories for a new generation, a colleague remarked, and it's painful that's not recognized.

Though a piece at the Guardian calls for “casting directors to diversify their thinking ... directors to demand to see different types of actors.. [and] writers … [to make] more of an effort to write interesting parts for actors of color that defy stereotypes,” it also mentioned that there is something moviegoers can do: speak with their money. Support diverse films with ticket sales and reject movies that offer them the same old. So, the onus is on everyone to change the status quo for the Oscars and beyond.