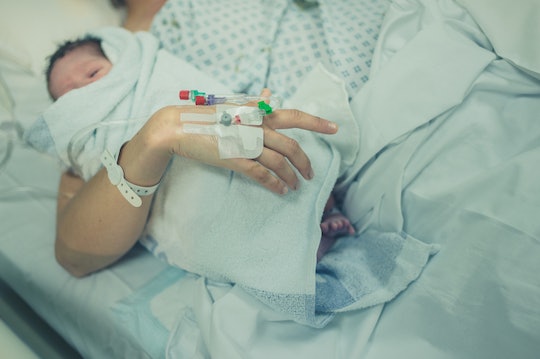 For years now, moms who have previously had C-sections have been told, for future deliveries, that vaginal births are simply out of the picture — that trying to have a vaginal birth after a C-section is too risky to attempt. Even moms who have looked up hospitals willing to carry out vaginal births after C-section (VBACs) have, in extreme cases, been forced into having C-sections last minute, with many doctors simply unwilling to take the risk. On Tuesday, however, the American College of Obstetricians and Gynecologists announced new guidelines that push hospitals to let women choose VBACs if they want them.

According to the American College of Obstetricians and Gynecologists, 60 to 80 percent of women who attempt a VBAC are able to successfully deliver vaginally, but the number of women getting VBACs today doesn't reflect that success rate.

"Despite a 23 percent increase in VBACs from 1985 to 1996, that number has since plummeted as the cesarean delivery rate has continued to trend upward," Mark Turrentine, chair of ACOG’s Committee on Practice Bulletins-Obstetrics, said in a statement. He continued:

This is the opposite of what we want to see happening, and it’s because there is still a great deal of misunderstanding regarding the safety of ... VBAC and a reticence to consider this a viable option due to medical liability concerns.

The new ACOG guidelines push hospitals to eliminate their "no VBAC" policies, essentially stating that if they can handle emergency C-sections, they can handle VBACs. Of course, not every woman is the right candidate for a VBAC — a fact the ACOG emphasized — but a vast majority of women who aren't even given the option are likely good candidates for it.

The ACOG pointed out that, when risks and benefits are weighed overall, the anti-VBAC sentiment in certain facilities simply doesn't make sense. Yes, VBAC carries with it a risk of uterine rupture (in which a woman's uterus tears along the scar from her past C-section), but it's a low one: according to the ACOG, a woman's risk of uterine rupture during VBAC is only 0.5 to 0.9 percent.

There are also benefits to delivering vaginally, even after a previous C-section. Women who deliver vaginally can skip major abdominal surgery, enjoy a faster recovery time, and lower their risk of hemorrhage, blood clots, and infection. For future deliveries, they face a lower mortality risk since they haven't had repeated C-sections, the ACOG noted.

So why do so many doctors and hospitals shy away from VBACs? According to experts, it's often due to fear of litigation. "It’s a liability issue," Michael Cackovic, an OB-GYN at the Ohio State Wexner Medical Center, told SELF last year. Doctors need to be prepared to know how to handle uterine rupture, on the off-chance that it occurs, and some hospitals forbid VBACs due to limitations on their malpractice insurance, as Cackovic told the publication.

"For us, as physicians, to have ACOG’s support is really important," Mara Rosner, an assistant professor in the Department of Obstetrics and Gynecology at NYU Langone Health, told HuffPost. "This emboldens physicians who might be more reticent to offer VBAC to maybe consider it."

Of course, whether a woman is a good candidate for VBAC will vary depending on her unique situation, and that's something every woman should discuss with her doctor. But here's a round of applause for the ACOG for helping improve access to VBACs and giving women a bigger say in how they choose to give birth.