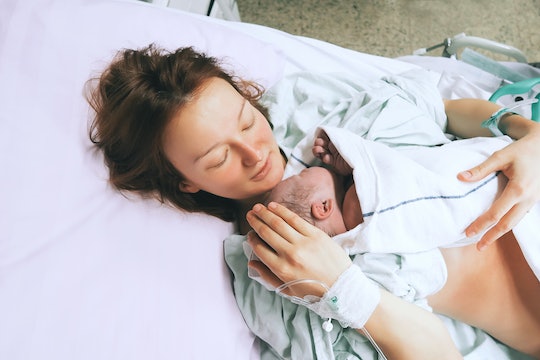 There are tons of health trends that pop up for new parents that are generally safe or worth trying, like eating your placenta or trying out a new sleeping arrangement you hadn't thought of yet. But one new practice has experts concerned. According to new guidelines from the American College of Obstetricians and Gynecologists (ACOG), vaginal seeding might be dangerous for newborns, so might be best to take it off the table.

Vaginal seeding is exactly what it sounds like. Mothers who give birth via a C-section are often worried that her vaginal bacteria isn't passed onto the baby. The ACOG acknowledges that the vaginal bacteria isn't transferred to the baby with a C-section. However, there is a growing wealth of information out there that suggests vaginal bacteria is important when it comes to building up an infant's immune system, helping them fend off allergies, asthma, and other immune disorders. But, some people believe that the growing number of C-sections in general is causing the frequency of allergies and asthma in young children.

So, some parents choose to do vaginal seeding, in which they take a cotton swab and transfer vaginal fluids from the mom's vagina and put it in the baby's mouth and all over his or her skin. But the ACOG doesn't think that the risks outweigh the rewards.

However, due to the lack of sufficient data, the very real risks outweigh the potential benefits. By swabbing an infant’s mouth, nose or skin with vaginal fluid after birth, the mother could potentially, and unknowingly, pass on disease-causing bacteria or viruses.

So whatever you do, don't put a Q-tip in your vagina and then onto your infant. The research on vaginal seeding just isn't there yet. To begin, according to the ACOG, the microbiota of babies born via C-section will vary too much, since some infants might have had contact with the mother's vaginal bacteria. It all depends on when the C-section was started.

There is some research out there that shows children will get more allergies and immune diseases depending on the mode of delivery, but as of right now, there's not enough to prove a direct causal link between C-sections and weaker immune systems, according to the National Institute of Health.

Yes, believe it or not, even doctors and scientists sometimes don't have all the answers. According to Rob Knight, director of the Center for Microbiome Innovation at UC San Diego, there are still too many questions about the effectiveness of vaginal seeding. He told the Los Angeles Times this year:

Epidemiologically we know C-sections increase the risk of a lot of conditions. We also know it leads to a different microbiome from vaginal delivery. What we don’t know is if the reason the risk is greater is because of the difference in the microbiome.

So yes, C-section babies and those delivered by vaginal births have different kinds of bacteria in their guts, and those born via C-section tend to have more long-lasting conditions, but there are too many variables to recommend vaginal seeding.

Instead, the ACOG says that breastfeeding your infant for the first six months is still the best way to prevent allergies, asthma, and beef up your infants immune system. Zahn said in the ACOG's statement:

The bacteria present in breast milk and on the nipple is sufficient for natural colonization or seeding of the gut. There may be some initial difference in the gut microbiota of infants based on mode of delivery but research has shown that difference disappears after about six months.

If you insist on vaginal seeding against the ACOG's recommendations, make sure that the mother is tested to ensure that she has a healthy microbe environment down there and that its acid lactobacillus-dominated, HIV and strep negative, along with having no STDs, lest they're passed to the baby.

But really, just don't do it for now. Until more research is done on the subject, it's best to play it safe, rather than possibly putting your baby at risk.