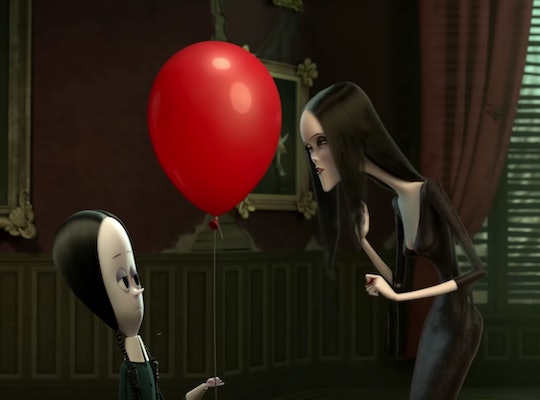 The First Trailer For 'The Addams Family' Is Here & Guys, It Looks Ghoulishly Good

The Addams Family is a little spooky, a little freaky, and just so lovable. America's creepiest and kookiest family has been freaking people out for generations now, and the newest, animated take on them has made them a little spookier (and even more lovable) than ever before. Old and young audiences alike will love the newest The Addams Family trailer, which shows off a fun, animated spin on the old classic.

The Addams Family is about to get a lot more "family friendly" thanks to the new animated film, coming out on Oct. 11, just in time for Halloween (that's six months from now, in case any parent needs a warning). The first trailer, which debuted on Tuesday, shows the family in the way that people know and love them for — messing with each other and getting into some classic shenanigans, but in their normal, twisted way.

The new movie already has a modern take on the old classic cartoon, thanks to the new animation style. But the plot will also be a little more modern, too. In this new The Addams Family movie, it will follow the family trying to plan a family reunion while also dealing with an evil reality TV host, according to Polygon.

Now that sounds like the best way to introduce the family to the younger audience.

As if people won't love this film enough for the hilarious gags or the way the characters are drawn (Uncle Fester, especially), then they'll definitely want to see it for the sheer star power alone. Some of the most popular actors and actresses are voicing the iconic characters. Charlize Theron and Oscar Issac will play Morticia and Gomez, respectfully, according to Deadline, with Chloë Grace Moretz playing Wednesday and Stranger Things actor, Finn Wolfhard playing Pugsley.

This is the first time that the family will be on the big screen since the live-action Addams Family films were released in the early 90s. And unlike those films, this animated version aims to create a bit of a backstory for the family, thanks to the film's directors, Conrad Vernon, and Greg Tiernan.

Last June, Vernon said in a statement that he plans on explaining how Gomez and Morticia meet, find their iconic home, and start their family, according to MovieFone.

"Greg and I have always been a fan of the Addams Family in past versions, so when we set out to make this movie, we were excited to do something new," Vernon said, according to MovieFone. "The reimagining also extends to the stellar cast we've put together who will each bring their own spin to our film that will appeal to longtime fans of the Addams and introduce them to a new generation."

And longtime fans are going wild over this new teaser trailer on Twitter.

Although the film is not yet rated, it already seems friendly enough for kids of all ages. Although it might give some people some new ways to have fun with their family (playing battleship in the house seems like a fantastic idea), rest assured everyone in the family will love the film.