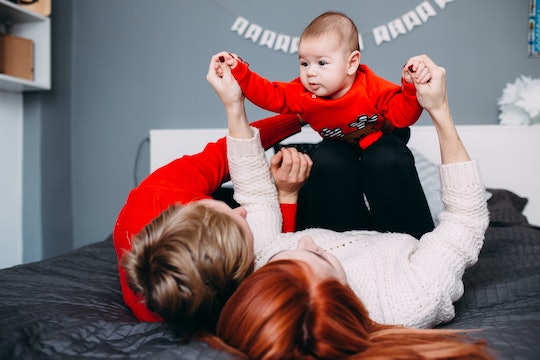 My husband and I went to counseling to basically have a third party create a chore wheel for us. But while we were there, the therapist unearthed some deeply rooted problems we hadn't even discussed — one of which was our sex life. The advice to me was to have sex even if I didn't feel like it, because intimacy essentially spurs more intimacy. It's old advice, but for a new mom with a past history of trauma, it was particularly bad advice. And something I am, in retrospect, shocked to have been told by a therapist.

Note: this story could be triggering for readers who have experienced sexual trauma.

I got married five days after my 20th birthday, a practice that I'm surprised is legal. At 20, some women know exactly who they are. But I was still trying to find my place in the world when I took up with another human I'd known for 11 months.

While I was trying to figure out who I was as an individual, I was also trying to figure out who I was as the other half of a couple. To say our first few years of marriage were tough is an understatement. We were two alphas who were used to being in charge of our lives. It was a constant power struggle that almost never resulted in compromise, and our pissing match landed us in marriage counseling just one year into what should have been our honeymoon phase. It was less like a honeymoon and more like a bear getting his head caught in a beehive.

We both thought our main struggle was housework. He'd grown up with June Cleaver, and I'd grown up with a free-wheeling mother who swore that a clean house was a sign of an unhappy marriage. Play now, dishes later was the mantra I was raised on. But we had no idea the true depth of our dirty laundry.

In the early days of our relationship, it was sexy time all day every day. If there was a spare moment to knock it out, we took it. But as the day-to-day reality of going from individual to permanent couple set in, and our power struggles increased, my desire to give the most vulnerable part of myself decreased.

Our counselor suggested that we needed to meet halfway between our sexual desires.

I think the first time I realized there was a problem was when our counselor asked us to answer honestly what our ideal number of smash sessions was per week. I quickly answered two to three, and he answered at least once daily. While his answer didn't surprise me, upon further questioning, our counselor found that I was stretching the truth. I gave the answer I thought I was supposed to give. But if I was honest with myself, I didn't care if we ever had sex again. We'd been fighting so much that I felt completely disconnected with my husband.

I didn't feel like I could trust him with my feelings, let alone with my body.

At the time my husband had no idea I had sexual trauma in my past. But in the safe space of a therapist's office I shared a glimpse of it. I was the girl that felt like "I asked for it," so he didn't even learn the full story until years later, but he knew there was a history of me having sex when I didn't want to.

What shocked me is that even with this information, our counselor suggested that we needed to meet halfway between our sexual desires. Since mine was at negative six times per week, and my husband's was once a day (at a minimum), our counselor said we should shoot for that two to three times per week I'd felt obligated to say in the first place.

The therapist said that I should just have sex with my husband even if I didn't feel like it because the idea was that sex begets sex — the more I did it, the more I would want it. Scheduling sex is still common advice for couples. An article by Vanessa Marin at Lifehacker suggests giving each of you several "free passes" per month to skip the sex date in case you don't feel like it.

I trusted that this medical professional knew what he was talking about, so I followed orders. I just laid there trying not to wince as my husband did what the therapist ordered as well — only it didn't help. Apparently my husband could only get into it if I was into it. So if I didn't show enthusiasm during one of these obligatory bang sessions, my husband couldn't perform either. It just made the tension worse. In his mind it meant I wasn't attracted to him, so instead of one of us feeling broken, we now both felt like failures. That didn't do anything to repair our divide, and he just ended up rejected and grouchy. So in the interest of fixing things, I did what all good wives do. I faked it.

At our next therapy session, my husband happily reported that things seemed to be going great. Our twice a week sessions were good enough for him and everything seemed just fine. Except it wasn't. I'd gone from occasionally enjoying sex to never enjoying it. I actually started to cringe at the thought of it.

My bed felt like a hostile cage. I knew the second I laid down I would be pawed at immediately and expected to perform. I was working as a waitress at the time, and I found myself volunteering to take the late shifts so he'd be asleep when I got home. I'd stay up doing anything and everything to avoid coming to bed. The sight of my husband getting out of the shower triggered a fight-or-flight response. But if I did give in and follow the doctor's orders, I made sure to put on the show. Ultimately, it wasn't our relationship that got stronger — it was my resentment.

After the birth of our first child, I couldn't fake it anymore. I'd had a fairly traumatic birth experience that resulted in a gnarly episiotomy. Sex didn't just hurt. It was excruciating. Looking back I seriously wonder if my male doctor put in a little "husband stitch." And the doc practically marked the 6-week window on a calendar for my husband in bold red marker. Despite my input at my check-up, he said I could resume normal sexual activity no problem.

We tried once, but it ended in tears, and my husband told me I needed to ask my doctor what was wrong. It couldn't be normal for it to hurt like that. I was clearly broken. But even after relaying to my doctor that it felt like my husband was ramming shards of glass inside of me, he basically told me to suck it up and it would get better the more I did it. Yet another medical professional who trained at the Get Over It Academy.

I tried to just do it, but I couldn't act through the tears. My husband tried to be gentle, but I was damaged. Again we were in the place where he felt rejected, and I felt like a failure.

We went through two more counselors who told us to just smash our way through the pain until we found one with a new approach.

After 10 years of "therapists" who said I needed to suck it up, we found one who didn't want to talk about our life between the sheets as much as she wanted to hear about what it was like outside of them. She wanted to know who I called when I got good news. I told her I called my mom and best friends. She asked why not my husband. I told her he just didn't get excited about much, and I liked to squeal about things I was pumped about. She went through an entire session helping me realize that my aversion to sex wasn't about sex at all. It was about intimacy. I didn't trust my husband.

My bed is a safe place again. I feel confident creating boundaries for myself. And I haven't faked one single night since then.

For years he had unknowingly hurt me, and because I'd been told it was normal I worked on my acting skills rather than my marriage. That mentality of "just bear through it" trickled into almost every other aspect of our marriage. I tolerated things because I thought I had to. Rather than finding my voice, I stifled it for the sake of peace.

The new therapist worked through our intimacy issues. We discovered my husband was suffering from crippling anxiety and depression that made it nearly impossible for him to empathize with anyone. And that led to me leaning on other people for the intimate moments of my life. We were basically strangers living in the same house.

We each sought individual counseling, and I came clean about faking it. It absolutely destroyed him at first, and he made me promise that I'd never fake it again no matter what a doctor recommended. He got help for his own issues, and I can now honestly say — without faking it — that we are stronger today than we've ever been. I trust him. I call him with my good news. He now empowers me when I start to lose my voice. My bed is a safe place again. I feel confident creating boundaries for myself. And I haven't faked one single night since then.

I now advocate for women who think they "owe" anyone sex. I've learned my body is not up for grabs. I do not owe one second of myself to anyone. Not even my husband. After I had my last baby, I gave myself the freedom to heal. My husband knew I'd come to him when I was ready, and it has created a healthy environment that has trickled into every other aspect of our marriage. There's a closeness and a trust there that we've never had since we said our vows.

If you are the victim of sexual assault, you can call 800.656.HOPE (4673) to be connected with a trained staff member from a sexual assault service provider in your area. You can also visit RAINN for additional resources.