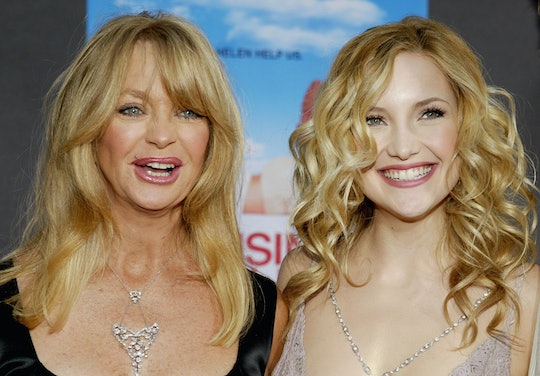 So This Is The Age When Women Start Turning Into Their Mothers, Poll Finds

Oscar Wilde once said, “All women become like their mothers. That is their tragedy. No man does, and that is his.” As it turns out, this 18th century Irishman was on to something. A recent survey found Wilde's claim to be true and, according to Marie Claire, reported the age women turn into their mothers to be somewhere around their mid-30s, the age when they reported becoming mothers themselves.

Dr. Julian De Silva is a Harley Street surgeon from the United Kingdom who conducted the research, surveying 2,000 women and men to find out when they start to resemble their parents. His survey found that women become more like their mothers shortly after having a child, usually within the first few years, according to Harper's Bazaar.

Women in the U.K. on average tend to give birth to their first child around the age of 30, as Cosmopolitan reported, and many of the women in the study told De Silva that this was about when they stopped acting rebelliously towards them mothers and started acting like them instead.

What does that look like? The study participants said they began to use the same sayings as their moms and started to enjoy the same hobbies and entertainment, according to the Daily Mail.

The study ultimately found that 52 percent of participants said they began acting like their moms between age 30 and 35, while 26 percent pinpointed the change occurring between age 35 and 40, and 10 percent believe it doesn't happen until 40 to 50, according to Harper's Bazaar.

Becoming parents is the main trigger and lifestyle factors are also important." Another turning point: when we begin to physically resemble them. According to Metro, De Silva explained: "It is an inevitable part of aging but a process lots of people want to put off for as long as possible. It is one of the reasons why the average age of first-time cosmetic surgery is coming down for both sexes."

Back in 2011, Hallmark conducted a similar poll that generated roughly the same results. The popular greeting card company spoke with 1,000 U.S. adults to determine the age when they started using phrases spoken by their mothers during childhood, according to the Daily Mail, and Hallmark researchers, too, found that it was around the age of 30 to 32, to be exact.

Along with picking phrases from their mother's generation, such as "Don't make a face like that, if the wind changes, you'll stay like it," participants also reported developing habits of their parents such as worrying, watching soap operas, being outspoken, and stocking up on groceries, according to the Daily Mail.

If you're still not convinced that the magic age when women morph into their mamas is their early to mid-thirties, I have yet another study for you to consider — this one conducted by the online gaming site Dotty Bingo. Back in 2013, the site surveyed 1,000 of its female players to gain insight about who introduced them to the game of bingo; shocker, it was their moms. According to Slate, Dotty Bingo also asked whether or not women felt they had turned into their mothers, and half reported that they did feel that way.

Of those who responded positively to the question, most reported that they had began acting and feeling like their moms between the ages of 30 and 35, Slate reported. These changes included listing their mothers as their "most inspirational figure," having the same hobbies and figures of speech, and even being attracted to the same men — yikes.

So, there you have it. I don't know about you, but I have about four years left before I'm telling my kids that they "smell like outside," and start making quilts out of their old t-shirts. But hey, there are worse things I could become than my awesome mom.