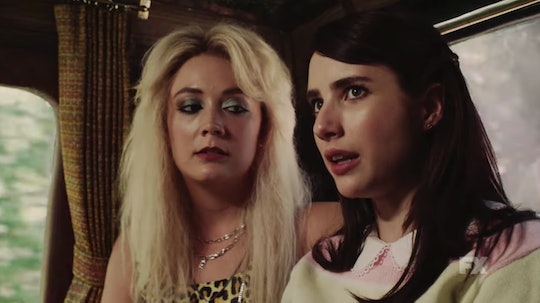 Break Out Your Crimping Iron, The 'AHS: 1984' Trailer Is Here

Early promo for the newest season of American Horror Story, dubbed 1984, hinted at its retro setting and slasher inspiration. Teasers featured teens running for the safety of their summer camp cabins while a masked killer tracked them, all scored to some solid '80s bops. The AHS: 1984 trailer doubles down on the theme while giving viewers some more information about the actual storyline.

The trailer opens with two kids canoodling in their bunk, nary a care in the world, when the door bangs open and a masked assailant arrives. A few screeching jump cuts reveal a bloodbath at the hands of this mysterious, knife-wielding murderer — before it slides into the opening title with some decade-accurate electric guitar. The vibe is strong with this one. You're going to be buying leotards and ratting up your hair by the time this season is over.

Speaking of leotards, the trailer then jumps to an aerobics class where the entire main cast is sweating it out in their leg warmers. If you didn't go to an aerobics class in the '80s, were you even alive? Apparently not. Bleached instructor Cody Fern informs Billie Lourd, Emma Roberts, DeRon Horton and Gus Kenworthy (some character names still in question) that he landed a job as a camp counselor. Sounds like a great opportunity for the whole crew, right?

I imagine you already know where this is going. Everyone piles into a van to head to Camp Redwood, but their excitement for the "constant party" that is summer camp is soured somewhat by talk of the masked killer. It seems like the murderer already struck once before, giving the camp a dark history. It's like stepping into the sequel of a slasher flick without having seen the first movie. But don't worry; AHS will soon catch you up.

Bloodshed starts before the backstory can ensue, however. Fern's character is so busy telling tales of horror that he accidentally hits a stranger with his car, then delivers the unseen person to the nurse, played by Angelica Ross, and not to a hospital. Surely a camp nurse can clean up a serious accident on her cot with some cotton and bandaids. That won't come back to bite them at all. Unrelated: has anyone ever seen I Know What You Did Last Summer?

Best to leave that behind and gather around the fire for scary stories. Ross' Nurse Rita dubs Camp Redwood the site of the "worst summer massacre of all time," but Fern dismisses that as a ghost story. However, the trailer also reveals that the killer Mr. Jingles recently broke out of the asylum they were living in. The counselors should probably start listening to Nurse Rita if they want to know what's going on here. It sounds like she has the facts.

There's a flurry of action — windows breaking, fiery projectiles, Roberts covered in dirt, knives being carried ominously — before a character promises the counselors, "You're all gonna die." Based on past seasons of AHS (and the fact that this season is inspired by '80s slasher movies), that's pretty much a guarantee.