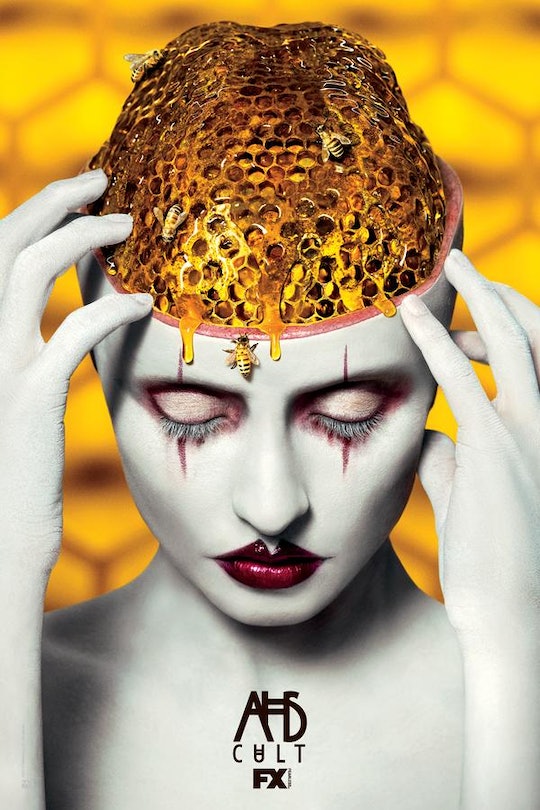 The opening credits of American Horror Story are an integral part of the show. Though they change with the season, with even the song being tweaked to fit the theme, the frenetic images and discordant music set the stage for all the madness that follows. The credits took a vacation for American Horror Story: Roanoke's show-with-a-show, but now they're back in true form. As usual, they're giving tons of hints about the upcoming seventh season without actually revealing anything, though the AHS: Cult opening credits feature Donald Trump and Hillary Clinton in a nod to the season's inspiration.

But it's not actually Trump or Clinton, just rubber representations of the former candidates. A few shots in the opening credits show unidentified people pulling on Trump and Clinton masks — the kind that usually pop up in Party City right before Halloween hits. The glimpses of Trump and Clinton's rubberized faces are downright unsettling, especially surrounded by the rest of the surreal imagery in the opening credits. There are the bees and clowns that dominated promotional material for the season, as well as a great deal of blood and Americana. Even the theme song has been given a trumpeting flair that makes it sound almost like an anthem.

It's clear what AHS: Cult will be skewering when it premieres on Sept. 5, even if it's less certain just how it will play out.

Series creator Ryan Murphy revealed the inspiration for the season very early on, before the full title was released or any of the trailers had dropped. On Watch What Happens Live with Andy Cohen, Murphy said that AHS Season 7 would be about the election, though he later clarified that the inspiration wasn't literal, but allegorical. The season will mirror what's currently going on in the country, but presumably taken to extremes.

According to The Hollywood Reporter, AHS Season 7 will begin with the actual election but then branch out from there, paying particular attention to the people in this country who have had to live with the fallout. "[It's] about illuminating and highlighting people who don’t have a voice in our culture — people who are ignored by the current administration and who are afraid and feel terrorized that their lives are going to be taken away," Murphy said. "American Horror Story begins with election night and the national conversation and both the euphoria and the fear."

From the sounds of it, this season of American Horror Story might feel a little bit too real. Which could very well be the most terrifying thing about it.