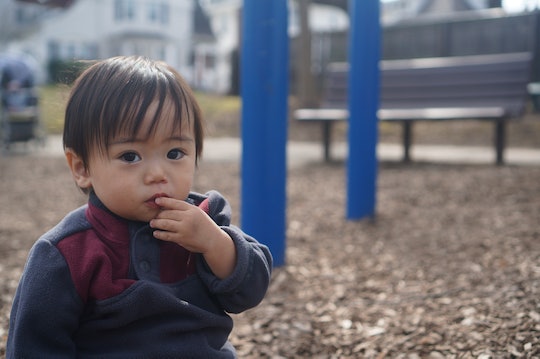 The Quiet Way Global Warming Will Hurt Our Children

Decades upon decades of research have proven that climate change is real. The air has become more polluted, water has become more susceptible to bacteria growth, and extreme weather events have increased in frequency. All of these changes have had a very real and dangerous impact on people's health. In fact, experts have recently discovered that rising CO2 emissions will make kids protein deficient, and that will have serious health outcomes down the line.

A new study published Wednesday in Environmental Health Perspectives found that populations in 18 countries will lose a significant amount of dietary protein over the next three decades because of rising carbon dioxide levels, according to Reuters. In particular, researchers from the Harvard T.H. Chan School of Public Health discovered that, as CO2 emission levels rise, the nutritional value of staple crops will start to decline. This loss could lead to protein deficiencies for billions of people who rely on crops such as wheat, barely, rice, and potatoes for their daily protein. They may lose more than 5 percent of their dietary protein by 2050, the findings showed.

Millions of children would be most at risk of health-related complications caused by protein deficiency, leaving them more vulnerable to disease and death, according to the study. Research have shown that insufficient protein levels in children and adults can lead to low muscle tone, slow growth, reduced energy, physical weakness, heart problems, and poor immunity, among other symptoms.

Thought must be given to reducing vulnerability ... through supporting more diverse and nutritious diets, enriching the nutritional content of staple crops, and breeding crops less sensitive to these CO2 effects. And, of course, we need to dramatically reduce global CO2 emissions as quickly as possible.

Researchers at the Harvard T.H. Chan School of Public Health also released a companion paper on Wednesday that looked at decline in iron levels related to rising carbon dioxide emissions. According to that study, which was published in GeoHealth, more than 350 million children under age 5 and more than 1 billion women under 45 years old are expected to lose nearly 4 percent of dietary iron because of increasing CO2 levels. Researchers say CO2-related reductions will exacerbate "the already significant problem of iron deficiency worldwide," predominantly in South Asia and North Africa.

Like protein deficiency, insufficient iron can have adverse and long-lasting effects on your health. According to the Mayo Clinic, iron deficiency can cause extreme fatigue, weakness, pale skin, poor appetite, chest pain, heart problems, and breathing issues, among other serious issues.

It's clear from these studies that, not only is climate change destroying the planet, it's also putting our children in danger. It's important, then, that people do their parts to lessen the effects so that we could leave a healthier world behind.