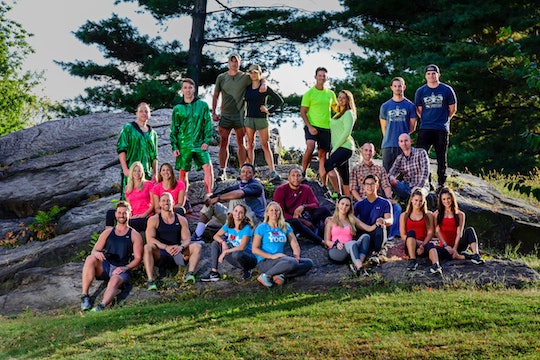 Meet The Cast Of 'The Amazing Race' Season 30

An all new season of The Amazing Race is finally here, and this season is going to be big because it's the show's 30th season. The multi-Emmy Award-winning series, which began in 2001, follows teams of two as they travel around the world completing challenges in order to find their next location. The last team standing at the final destination wins $1 million. So who's on The Amazing Race Season 30 cast? You may recognize one pair of contestants in particular from their memorable stint on Big Brother.

This season, the competitors are quite varied and include reality stars, X Games athletes, classical musicians, firefighters, and more. What's great about The Amazing Race is the challenges the competitors have to face are both physical and mental, and it's also about working with your partner as a team. Therefore it doesn't necessarily matter if one team is more physically fit than another because it'll take more than just strength and endurance to make it through The Amazing Race and win. It doesn't hurt to have both of those things, though.

As the series goes on, pairs who fall behind will begin to be eliminated allowing for only one team to remain at the end. Check out the list of teams below and start placing your bets on who you think will win the grand prize.

Alex and Conor (#TeamIndyCar) are both IndyCar drivers and hail from Indianapolis, Indiana. They're excited to travel the world and hopefully make some new fans.

April and Sarah (#TeamGoatYoga) co-own Arizona Goat Yoga, where people get to enjoy yoga with goats. Prior to being a goat farmer, April was also a professional Waterskiier and 2x competitor for American Ninja Warrior.

You may recognize Cody and Jess (#TeamBigBrother), popularly known as "Jody," from their time in the Big Brother 19 house. Though neither walked away with the big prize, they did become fan favorites, with Cody even winning America's Favorite Houseguest. Now the couple are trying to win a different prize. Maybe this time that'll win it all.

Dessie and Kayla (#TheRingGirls) are models and best friends who both made it to Sports Illustrated Swimsuit's Top 15 recently.

Joey and Tim (#TeamChomp) are competitive eaters who are excited to finally be on the same team and get to spend time with each other. The pair live on opposite coasts (Joey in San Jose, California; Tim in New York, NY) and usually only meet up for their competitive eating contests where they are rivals.

Kristi and Jen (#TeamExtreme) are X Games Pro Skiers and it was actually Kristi who started the women's freeskiing movement. Although the pair will be missing out on the 2018 Winter Olympics this February, they're excited to be competing in The Amazing Race.

Couple Lucas and Brittany (#TeamOceanRescue) are both lifeguards working in Miami Springs, Florida. Besides having fun traveling, they both hope to learn how to better communicate with each other while competing.

Identical twins and firefighters, Eric and Daniel (#TheFirefighters) hope to reconnect with each other outside of work since they have the same profession.

The youngest competitors this season, Henry and Evan (#TeamYale) are excited to travel the world. The pair, who've been dating for a year and a half, hope to learn more about each other as they go on this new adventure.

Cedric and Shawn (#TeamSlamDunk) are retired NBA players and fathers, ready to explore the world and hopefully win the $1 million prize.

Trevor and Chris (#TeamWellStrung) are musicians from New York, NY who perform in the string quartet Well-Strung, which travels around the country and world. The quartet performs a mix of pop and classical music.