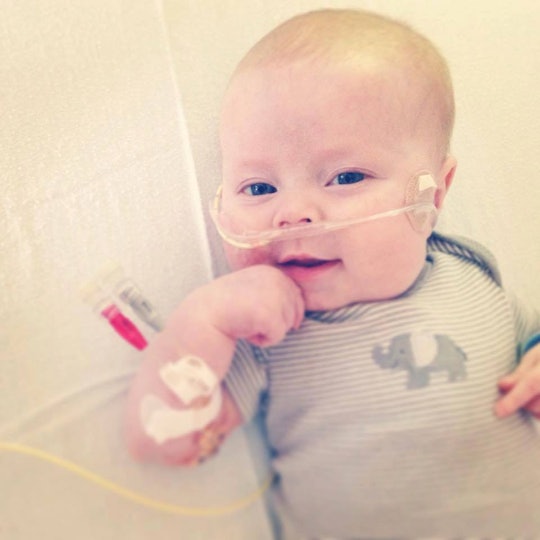 The Amazing & Unexpected Way This Mom Coped With Losing Her Baby

You may or may not know Lexi Behrndt. I mean, chances are you do not know her personally, but if you have read her words, or any of her work, you may feel like you do. Behrndt is a single mother, a writer, and the founder of Scribbles & Crumbs, a website she created after the death her son, Charlie. Charlie, born in April 2014, lived just 200 days. He died of a congenital heart defect when he was just six months old. But, Behrndt doesn’t look at Charlie’s life as “just 200 days.” She sees 200 days of victories. 200 days of fighting, of being, and of breathing. Behrndt sees 200 days of love and life. And, before long, the Scribbles & Crumbs website, which began as a way for one mother to heal and cope with the loss of her baby, transformed into a community. And that community sparked Behrndt's creation of the #oncomingalive project.

In an interview with Behrndt, she explained #oncomingalive came to be after a long, and painful, grieving process:

Over the course of nine months, I experienced the loss of my son (after a six-and-a-half-month-long hospitalization), the loss of my marriage (after years of heartache), and a million tiny, secondary losses as a result. I became all too familiar with the darkness ... I wrote as a way to process through my grief and to rise from the ashes that were my life. Over a year later, and here I am. Standing. Breathing. Alive, [and] possibly more alive than ever...I’m rising and coming alive.

She hopes the project will inspire others, and show that — while we all struggle in our own ways — there is hope:

Coming alive doesn’t mean that we act like the pain doesn’t exist. But in the light, like a flower opens in the sun’s warmth and nourishment, the light can make a broken heart come alive, shedding the frost, shedding the numb from the winter’s cold, and blossoming, even if it hurts sometimes, and even if it’s hard, it’s also beautiful ... It’s a coexistence of many things, sometimes those things are the deepest of sorrows and the deepest of loves. It is possible. Coming alive means facing both and rising from the ashes, even if we’re broken, even if our hearts are shattered, even if we’re permanently scarred.

While the #oncomingalive project was born out of grief, Behrndt made it clear that the pain she knows, and speaks of, is no way limited to those who have experienced the loss of a child — and she wants the project to reflect a universal pain. In fact, the #oncomingalive project was designed to share the stories of anyone who has lived through, and overcome, grief, pain, illness, addiction, domestic violence, rape, and other similar tragedies:

We all suffer in some way, and at some point in life, we all need a hand to lift us. We are taking the hands of anyone who will join in, and we’re pulling one another out of the darkness and into the light— where hope lives.

These are a few of Behrndt's favorite stories.

Joe Kowalisyn, On Coming Alive After The Death Of His Daughter

“It has taken me over a year to get to where I am today in my healing process, and I know I still have a long road to travel. I have changed. My thoughts are constantly around my family and my daughter who should be experiencing all of the firsts her brother is going through. It is so unbearable at times, I do not know how my wife and I manage. I do know that life is filled with wonderful things, and it takes a lot to push the grief and depression aside to start to see those things again. Once I got that first minute of 'normalcy' during my depression, and I realized that I am still here for a reason, I was able to start what I would consider my healing journey.”

Dari Nowkhah, On Coming Alive After The Death Of His Son

"I imagined him, looking down at his family, watching everything we did. Would he want us to stop functioning in any productive way? Would he want his brother and sister suffering because their parents stopped being parents? No. I had to honor him. I had to continue being 'Dad.' He’s always been in my thoughts. He’ll always be my little 'Hay Day,' as I called him, but I’ve survived because, as I said previously, I’m a very lucky man. I have so much to live for. From the day we suffered our biggest loss, I only had one option."

“I am still afraid to discard the shell entirely. It’s now more like an ice cream shell coating that breaks into pieces with the gentle tap of a spoon. My second husband has found the way in through those cracks, and with every loving gesture, every bit of understanding and patience, a segment is cast off. It is through allowing him to love me and showing my vulnerability that I am able to feel love unencumbered by drama and anger and pain. It is love the way it’s supposed to be.

Courtney Fitzgerald, On Coming Alive After The Death Of Her Husband To Cancer

“I started small. Instead of looking to the darkness for comfort, I found light. Light is everywhere when you really look for it. It shines off of leaves and seeps into a room. Light streaks across the sky as the sun is brightening our earth, or leaving us for another day. Even on the dark, stormy and cloudy days, light is in our lives. Color is derived from the spectrum of light, so even on the darkest of days, where you see color, you see light.”

"Time is passing, which feels impossible, but the depth I have experienced through this altering, agonizing loss has made me a better human. It has ignited in me a passion. I feel grateful for all that we walked through, because, without every single piece of it, I wouldn’t know the kind of love that I now know or the kind of pain that somehow made it all worth it. I don’t think I would ever have known what it meant to feel truly alive if it weren’t for the heartache of a broken marriage, the loneliness of tragic doctor appointments, the impossible decisions that had to be made along the way, the stretching of friendships, the finding of new love and new hope, the pure joy in my fragile child’s face, the extreme sadness of her dying, or the total helplessness of mending my other children’s hearts."

"Without the despair and suffering, the sunsets would never have seemed so bright. Without the desperation and darkness, this joy could have never been truly experienced, let alone explained. Without the helplessness and surrender, I would have never known the kind immeasurable love and grace of an amazing Father who created me from nothing and breathed life back into this broken spirit."

When I asked Behrndt what she does on days when she doesn’t feel as though she can come alive, or how she reminds herself to move forward, she gave me the best response:

Short answer: [I] eat a gallon of ice cream with a spoon.

Real answer: I lean on others, on my faith, on what I know — that I'd rather have Charlie for a moment than to never have known him at all.

The #oncomingalive project is currently open to submissions, to anyone and everyone, no matter how they have suffered. Read more about the project and all of the stories at Scribbles & Crumbs.

More Like This
Here’s What You Need To Know About That Viral 1960s Baby Formula “Recipe”
First Look: The New Jujube x Lilo & Stich Collaboration
10 Ways ‘Workin' Moms’ Is Basically A Crash Course In Parenting
10 Of Céline Dion's Best Quotes on Motherhood