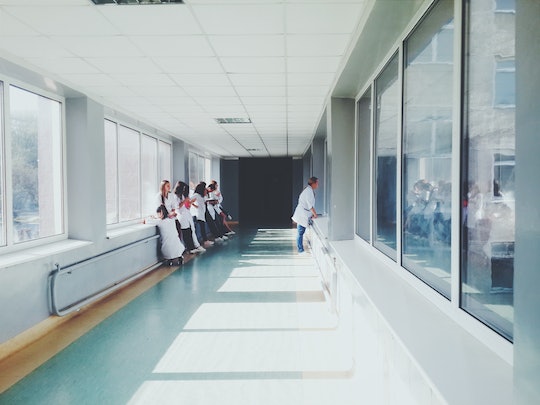 The Amazing Way This Hospital Is Helping Babies Through Withdrawal

Skin to skin contact is absolutely necessary for infants in general. But for babies suffering from withdrawal, touch can arguably be one of the most healing things out there. Usually, there is only so much that others can do to help babies that are not their own, but now, one hospital is helping babies suffering from withdrawal through the power of touch — and more importantly, it's making the program a community effort.

The Miami Valley Hospital in Dayton, Ohio is providing retirees with the opportunity to give back to babies suffering from withdrawal, simply through cuddling. Yes, cuddling. For the past month, the "volunteer infant cuddling program" has been pairing newborns diagnosed with neonatal abstinence syndrome with volunteers who simply hold the babies for periods of time. That's it. Simple, easy, and incomparably sweet. Neat, huh?

Neonatal abstinence syndrome (NAS) refers to the group of problems that a baby experiences when withdrawing from exposure to narcotics in the womb. If the mother does drugs while pregnant, the baby will be born with a dependency on those drugs as well, according to Stanford Children's Health, thus experiencing withdrawal when the drug is no longer available outside the womb. Babies who are treated for NAS can be irritable from withdrawal and have a hard time being comforted, which is where the cuddling comes into play.

According to ABC News, the moms of the children in the program are not available to tend to their baby's needs, having to seek treatment themselves, go back to work, or go home to tend to their other children. This leaves the babies with NAS in the hands of the 14 volunteers in the program, who have to undergo a background check, medical testing, and a lengthy orientation to hold the babies. The hospital has already seen improvement in the babies and have received an overwhelming amount of feedback from the volunteers.

"The mom's arms are the best medicine for these babies, but if the mom cannot be there to provide the cuddling social interaction, the cuddlers can help fill that void and help soothe and comfort these babies," Amy Clayton, a clinical nurse educator at the Miami Valley Hospital told ABC News.

But the Miami Valley Hospital isn't the first hospital to come up with a program like this, which means there could very well be a cuddle program near you as well. Take, for example, the Cuddler Program at Magee-Womens Hospital of UPMC in Pittsburgh, Pennsylvania, where volunteers have been cuddling babies going through withdrawal for the past 10 years.

Babies born with an addiction have tripled in number over the past 15 years, according to the Centers for Disease Control and Prevention. Treatment for NAS varies and is normally dependent on the doctor, according to Stanford Children's Health, as fluids and medications could be necessary to help babies going through withdrawal as well. But skin to skin contact is recommended highly, given that touch is one of the only things that can really soothe them.

The idea might be simple, but the outcome is enormously important. Who knew that cuddling could do so much?